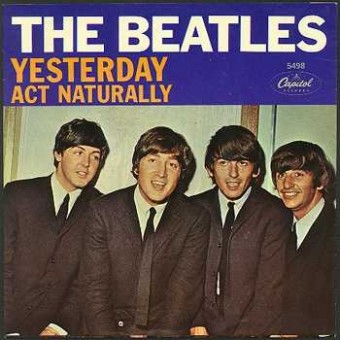 “Yesterday”, written entirely (or almost entirely– read on) by Paul McCartney, is either the most, or second most, recorded song of all-time. (Guinness World Records claimed it was the most, but this has been contested with others claiming George Gershwin’s 1935 “Summertime” is the true owner of that mantle.) Whatever the case, to date, at least 4,000 different versions of the classic “Beatles” tune have been recorded by artists as diverse as Frank Sinatra, Elvis Presley, Liberace, Tammy Wynette, Daffy Duck (!), The Mamas and the Papas, Marvin Gaye, Ray Charles and Placido Domingo.

In the mid-sixties, long before “Yesterday” was known to the general public, singer Billy J. Kramer said he was looking for a new song to record and Paul played him “Yesterday.” Poor Billy turned it down because he said it wasn’t right for him. Chris Farlowe also turned down the number, telling Paul, “It’s not for me. It’s too soft. I need a good rocker, a shuffle or something.”

So how did Paul come up with it? “It was the only song I ever dreamed,” said McCartney. Yep, the tune for “Yesterday” came to Paul McCartney in a dream. Paul woke up one morning, late in 1963 in the attic bedroom of Jane Asher’s house (Jane was his then-girlfriend) with a complete melody in his head and set some nonsense lyrics to it.

The original title was actually “Scrambled Eggs.” Paul’s original lyrics were, “Scrambled eggs, Oh you’ve got such lovely legs, Scrambled eggs. Oh, my baby, how I love your legs.”

As for the tune, Paul was initially unsure whether he had actually thought it up himself or if he had unintentionally stolen it from another composer. He played the tune to the other Beatles and recalled, “It was like handing in something you’d found at the police station and waiting to see if anyone claimed it.”

Still unsure, Paul played the melody to several other musicians and composers, but each one assured him they didn’t recognize it and he hadn’t unintentionally stolen it from another source.

After its ultimate release and widespread popularity with no one claiming the tune, in every McCartney interview since 1980, Paul has claimed complete 100% authorship and ownership of the song.

But, as with so many “facts” in the history of the Beatles, this now-gospel is disputed. According to John C. Winn, author of the excellent Beatles book “That Magic Feeling: The Beatles Recorded Legacy,” when Paul first played the song to his fellow Beatles, it was John who suggested the three-syllable title “Yesterday.” In a pre-1980 interview, John also stated: “The song was around for months and months before we completed it.” (Note the “we”.) Lennon continued, in the same interview: “Paul wrote nearly all of it. We just couldn’t find the right title.”

In an interview in March of 1967, Paul also stated John came up with the title when asked by Brian Matthew about the backstory of “Yesterday.” John stated, “Ah well, this is John saying I don’t know anything about that one. I’ll hand you over to Paul.”  Paul then stated, “This is Paul, taking up the story in a holiday villa in Corsica. Strumming away on a medieval guitar, I thought [sings] ‘Scrambled Egg.’ But I never could finish it, and eventually I took it back in. With the ancient wisdom of the east, John came out with [sings] ‘Yesterday’.”

This is in direct contradiction to a May of 1965 interview in which Paul stated, “I remember mulling over the tune ‘Yesterday’, and suddenly getting these little one-word openings to the verse. I started to develop the idea … da-da da, yes-ter-day, sud-den-ly, fun-il-ly, mer-il-ly and Yes-ter-day, that’s good. All my troubles seemed so far away. It’s easy to rhyme those a’s: say, nay, today, away, play, stay, there’s a lot of rhymes and those fall in quite easily, so I gradually pieced it together from that journey. Sud-den-ly, and ‘b’ again, another easy rhyme: e, me, tree, flea, we, and I had the basis of it.”

By 1980, John had also changed his tune, saying in his Playboy interview that “Yesterday” was entirely Paul’s and that he had nothing whatsoever to do with it. “I never wished I’d written it and I don’t believe in Yesterday.”

Whether or not “Yesterday” is indeed 100% Paul’s song or whether John helped in any way with it joins the scores of other “Mysteries of the Beatles” that will undoubtedly remain a bit baffling and will be “unsolved completely” for the ages. But if we’re not nitpicking, it seems clear it was a “Paul work,” with a possible extremely minor contribution from John.

In the end, it took almost two full years for “Yesterday” to be recorded after the original “Scrambled Eggs” version. According to Beatles producer George Martin, Paul first played the song for him in Paris in January of 1964 and told him he thought the title “Yesterday” might be “too corny,” but Martin assured him it was not.

It was finally recorded officially in June of 1965. At first, they tried different ideas, including with John playing the organ, but eventually everyone decided it should be a Paul solo. Thus, “Yesterday” became the first-ever “Beatle” song recorded with only one Beatle and one Beatle alone.

The other “evolutionary” factor in the recording was the bringing in of a string quartet to back up Paul on the song. This was quite a huge breakthrough at the time for a mere “pop record.” These two factors were not without minor repercussions- jealousy from the other Beatles. (“Yesterday” was to be an early indicator of the chinks in the armor of early Beatle unity.)

“Yesterday” was released on the Beatles “Help!” album in 1965. The song wasn’t released as a single in Britain until after the band had officially split up (the “Yesterday as a single” idea was vetoed by John, George and Ringo.)

George Martin knew it was a “Paul song” and thought it should be released as such. But Beatles’ manager Brian Epstein quickly put the kibosh on this idea: “No. It is the Beatles.” According to Martin: “He did not want to divide his holy quartet. Though it wasn’t the Beatles at all, it had to remain so, as part of their recordings. I don’t think it irritated Paul at the time because he considered himself a Beatle above all other things.”

True, John did reap one-half of the composing royalties from “Yesterday” although it was “Paul’s baby,” but very shortly thereafter, Paul would reap the same one-half from songs completely written by John (“Strawberry Fields Forever,” “Come Together,” “I Am The Walrus,” “Revolution,” and many others.)

When the Beatles began touring in June of 1965, Paul initially didn’t play “Yesterday” because he thought it might upset John. This changed when the Beatles appeared on “Blackpool Night Out” in August of 1965. Apparently Paul was right and John didn’t like this “solo spot” idea and made sarcastic remarks all through Paul’s rehearsals of the song. (As an interesting sidebar, at the “Blackpool Night Out” performance, Paul reportedly dedicated the song to his ex-girlfriend, Iris Caldwell. Other sources claim Iris had once called Paul “unemotional” and he called Iris up and played “Yesterday” to her over the phone to prove otherwise.)

On August 14, 1965, Paul performed the song on “The Ed Sullivan Show”- when he finished the number, John Cuttingly said, “Thank you Paul, that was just like him.” George was later to complain, “Blimey! He’s always talking about that song. You’d think he was Beethoven or somebody.”

Despite the other Beatles’s derision, Paul was to perform the song solo at many of their live concerts during their 1965-66 tours. Of course, the Beatles all sang a drunk-like, sarcastic version of the song on their 1965 Christmas record. Even the great Bob Dylan joined the anti- “Yesterday” chorus, saying, “If you go to the library of congress you can find a lot better songs than that… there are millions of songs like ‘Michelle’ and ‘Yesterday’ written in tin pan alley.” (Ironically, Dylan was to record his own version of the song four years later. It was never released.)

Despite the puerile jealousies of his friends and colleagues, “Yesterday” remains a classic, easily the best-known and most beloved of Paul McCartney’s legions of compositions- his “signature song,” which has been heaped with numerous accolades.  For instance, in 1997, “Yesterday” was inducted into the Grammy Hall of Fame. It was also voted the best song of the 20th century in a BBC 2 poll of music experts and listeners. MTV and Rolling Stone Magazine also named it the #1 pop song of all-time. Broadcast Music Incorporated (BMI) asserts that “Yesterday” was performed over 7 million times in the 20th century alone.

Not bad for a song whose tune came to the composer in a dream and that started out with the lyrics, “Scrambled eggs, Oh you’ve got such lovely legs, Scrambled eggs. Oh, my baby, how I love your legs.”