When the Beatles Were Pelted with Jelly Beans 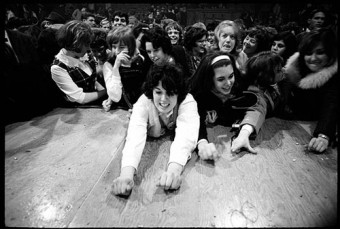 Beatles’ fans grab for Jelly Beans at the Washington Coliseum, 1964 -Photo © Bill Eppridge, courtesy of the Monroe Gallery of Photography

It was to be one of the strangest chapters in the storied history of the Beatles.  In most Beatle controversies, John Lennon, the most outspoken and controversial Beatle, was usually at the bottom of it, but not this time. George Harrison “The Quiet Beatle” brought on the 1963-64 Jelly Bean controversy that was to drive the Beatles batty.

In a 1963 television interview, George told the TV host that Jelly Babies were his favorite treat and that John had “stolen his Jelly Babies”.  OK, no big deal, right?

The Beatles were soon inundated by boxes of Jelly Babies sent to them by their fervent fans, but that was to be expected.  But within a few short days, when the boys started taking the stage for their concerts, their adoring worshipers started throwing Jelly Babies onstage, almost as a sacrificial offering, to please their idols. The sweet treats were thrown both “to” and “at” the boys. The Beatles hated it right off the bat.

In a rare letter from 1963 that George wrote to a 15-year-old girl fan named Lynn Smith, George bluntly stated he and his band mates thoughts and opinions on the subject:

We don’t like Jelly Babies, or fruit gums for that matter, so think how we feel standing on stage trying to dodge the stuff, before you throw some more at us. …besides it is dangerous. I was hit in the eye once with a boiled sweet, and it’s not funny.”

One can easily perceive George’s un-muted anger at the proffered sweets.  But that was in England, the worst was yet to come.

For those of you uninitiated, Jelly Babies are soft little sweets, the British counterpart to the American Jelly Beans, but much softer.  The Beatles came to America in February of 1964 and probably felt relief that now that they were in the good old U.S.A., the Jelly Baby tossing was over and done with.  But it was about to get worse.

In the Beatles first U.S. concert, in Washington D.C. on February 11, 1964, the boys were again pelted- but this time, by the much more bullet-like Jelly Beans, again impelled by their devoted fans.  George was to relate the D.C. Jelly Bean tossing to a New York reporter afterwards:

…that night we were absolutely pelted by the f*****g things. They don’t have soft Jelly Beans there, they have hard Jelly Beans. To make matters worse, we were on a circular stage, so they hit us from all sides. Imagine waves of rock-hard little bullets raining down on you from the sky… if Jelly Beans traveling about 50 miles an hour through the air hit you in the eye, you’re finished. You’re blind, aren’t you? We’ve never liked people throwing stuff like that. We don’t mind them throwing streamers, but Jelly Beans are a bit dangerous, you see! … Every now and again, one would hit a string on my guitar and plonk off a bad note as I was trying to play.”

Ringo, being the band’s drummer, had it a bit easier than the others and was slightly safer, as he could crouch and hide behind his drum kit.  Poor George, John, and Paul had to stand right in the face of the fire, with no protection other than their guitars.

The Jelly Bean projectiles were to continue throughout the Beatles’ first American tour.  In fact, in August of ’64 at the Cow Palace in San Francisco, the concert had to be stopped twice because of the hail of Jelly Beans.

A number of Jelly Bean tossing fans were thrown out of the September 6th concert at the Olympia Stadium in Detroit.  After the concert, Paul said of the Jelly Beans, “It has become a bit of a trademark with our shows, but we’d prefer they’d throw nothing at all.”

Fortunately for the fab four, the fad eventually ran its course and the candy attacks slowly dwindled out.  And, who knows? Maybe the result of his off-the-cuff remark about loving Jelly Babies was what caused George to become “The Quiet Beatle”. 😉