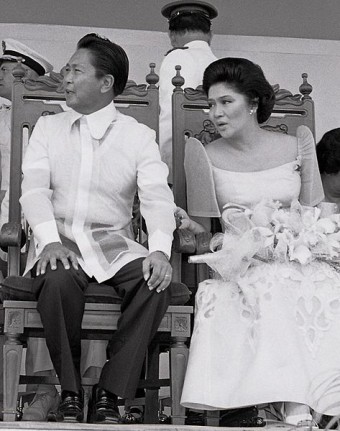 The Beatles arrived in Manila to give two concerts in early July of 1966.  This was to be one of their gigs on their 1966 final-ever tour; they had just finished a few very pleasant gigs in Germany.  There were “bad vibes” almost from the word “go” as the boys arrived at the Manila airport.  Ringo: “I hated the Philippines. It was like that hot/ gun/ Spanish inquisition attitude.”  George stated, “As soon as we got there, it was bad news. There were tough gorilla-little men in short sleeves who acted very melancholy.”

The boys were greeted at the airport by severe-looking armed guards and were sternly instructed to get on a boat.  A bit scared already, they complied.  This was actually the first time in their time together that they were separated from their manager or any of their aides while on tour.  They were taken to a limo and solemnly escorted to their hotel.

No one except them knew it, but they had another reason to be scared. The Manila guards had confiscated the boy’s traveling bags- which contained marijuana, which was illegal there as in many places.  (Fortunately for the Fab Four, their bags were not searched and their secret stash was never discovered.)

At the time in Manila, the country was ruled by the dictatorship regime of Ferdinand Marcos and as soon as the Beatles got settled in, they were told they were to attend a reception for the country’s matriarch.  Tired and jet-legged, they politely informed the guards they would not be attending.  A bit of arguing back and forth went on, but the boys stuck to their guns and settled in for the day.

They were soon joined in their room by their roadies, a few aides and their manager, Brian Epstein. They played two concerts that night and all went well. (They performed before two huge crowds of 30,000 and 50,000).  Their dressing room had been “a mess” and they had been served a horrible meal of corn flakes with lumpy, sour milk and some other horrible-looking food, but thought nothing of it.  Little did they realize what was in store for them.

The next morning, as they arose, Ringo and John tried to order breakfast from room service.  There was an ominous quiet on the other end of the phone line and their order was not taken.  As the boys casually turned on the TV, they saw films of President Marcos and a huge group of disappointed children with tears rolling down their faces.  Apparently, the Beatles had disappointed and insulted the Madame President and crushed the hearts of the little kids by “snubbing” them.  (Presumptuously, Madame Marcos had told the young hopeful children that the Beatles would be making an appearance and that they could meet them in person without first clearing it with the Beatles or their management.)

Moments later, a newspaper arrived with the headline “Beatles Snub President”.  After much ruckus, increasingly worried manager Epstein decided to issue a formal apology over Manila television.  As Brian’s apology was being broadcast on TV, the picture mysteriously went off and dead air was transmitted to the viewing public.

Now very afraid, the whole crew packed as quickly as they could and asked to be driven to the Manila airport.  Instead of the huge motorcade that had welcomed them the previous day, there was just a car and a cheap one-motorcycle escort.  As they arrived at the Manila airport, the band and their entourage were summarily dropped off.  Forced to carry their own bags, the small group hastily made tracks for the gates, but were soon greeted by a huge, hostile, bloodthirsty mob of furious Filipinos.

As the frazzled group made a mad dash for the gates, the Beatles and their aides were kicked, punched, spit on and yelled at with angry epithets. “We treat you like ordinary passenger! Ordinary passenger!”, the airport personnel unsympathetically informed them.  (Strangely, the Beatles aides were all attacked more furiously than the Beatles themselves- the boys were to remember their hapless chauffeur, Alf, getting kicked, bloodied, and pushed down a flight of stairs.)

John and Ringo ran for sanctuary behind a small group of Catholic nuns, while George ran for refuge behind a nearby Buddhist monk. (Thank goodness for the ever present airport clergy.) Ringo got decked by an uppercut and was kicked on the ground. He also suffered a sprained ankle from the melee.

By a strange “coincidence”, the escalator was “out of order”, so the beaten-up young men ran as quickly as they could, up the steps to relative safety.  Bruised and bloodied, they all finally made it on board the plane.  The terrified group waited nervously in the severe humidity- afraid for their lives.

An announcement came over the intercom, requesting a meeting with manager Epstein, their press agent and the Beatles’ personal assistants, Mal and Neil.  As Mal solemnly walked out of the plane, he asked the Beatles to “tell Lil I love her.” (Lil being his wife.)

It seems the “airport-leaving Manila tax” was being levied and it just happened to be the same amount the Beatles had been paid in currency.  Epstein paid the extortion money and the men were permitted to return to the plane. (The amount was reportedly around $18,000- $125,000 today.)

After another long wait, the exhausted, terrified group got permission to take off and fly home.  Ringo, always the most easy-going member of the group, was to remember the Manila trip of 1966 as “the worst experience of my life… I thought they were going to put us in jail”, he recalled.

Peace-loving George was later interviewed on television and said he’d like to “drop a bomb” on the Philippines.