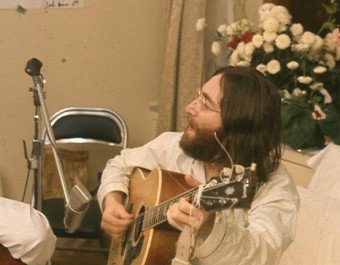 Today I found out John Lennon once almost beat a man to death.

Was John Lennon gay? “Why are you bringing up such a ridiculous question? Who cares if he was gay? I thought this article was about John Lennon almost beating a guy to death.” Well, it is, it is, keep reading and you will see all the pieces to this incredible, little-known chapter in the life of John Lennon and how perilously close his temper came to ending the Beatles entirely, almost before they really got started.  This savage beating also helped change Lennon’s life, as he said “It was the last fight I ever got into. That’s when I gave up violence, because all my life I’d been like that.”

In 1963, the Beatles’ were beginning to become famous in England and Europe. A little over a year earlier, they signed with a manager named Brian Epstein (who incidentally died of a drug overdose just four years after this).  Epstein was unequivocal in his sexual preferences- he was as gay as they come.  (As a point of note, being gay was actually against the law in Britain at the time, and was to remain so until 1966.)

According to Pete Best, the Beatles drummer before Ringo, Brian had tried making passes at all four Beatles (including himself) and was met, each time, with a polite but firm, rejection.  Many Beatles fans knew about Brian’s “secret life” and assumed that Paul, the “cute Beatle”, and the one most of the girls liked, was the object of his affections.  Nothing could be further from the truth.  It was the loud, overbearing, and aggressive John Lennon who Brian was crazy about.

In April of 1963, the Beatles were now one of the hottest acts in Europe.  Their records were selling like the proverbial hotcakes. The first album was sitting in the #1 spot on the charts; their concerts were selling out to capacity crowds; and within a few brief months, they would be playing the Royal Variety Performance in front of the Queen herself.

It was at this time, out of the blue, that John and Brian decided to take a break in the Beatles’ very busy schedule and go off together for a holiday in Spain. The first suspicious thing about this amongst fans was “Why did John go on holiday, as his wife had recently given birth to a new son?”  (Cynthia had gave birth to Julian, John’s first son, on March 8, 1963).  John admitted, years later, what a rotten and selfish thing this was for him to have done, but nonetheless, he went with Brian, sparking rumors that it was a romantic get-a-way.

Fellow Beatle, Paul McCartney, has his own take on John’s Spain trip with Brian.  According to Paul, the trip’s purpose was for John to assert who the real leader of the Beatles was with Brian. That John took Brian on the holiday “…to make sure Mr. Epstein knew who to listen to in this group”.  It is interesting that even in these very early Beatles’ days, John and Paul were already jockeying for an upper hand.

Whatever the case, John and Brian spent 12 days together in Spain. “We used to sit in cafes together”, recalled John, “looking at the boys. I’d say, ‘do you like that one? Do you like this one?’ …I was rather enjoying the experience, thinking like a writer all the time.”

The details of the trip were sketchy, at best, but soon John and Brian had returned and were ready to get back to the business of making Beatles records, performing concerts, and making appearances.  But in Liverpool, the “gay” rumors were now intensely swirling. Things came to a head with a disc jockey the Beatles knew named Bob Wooler (1926-2002).

Wooler was a very close friend of the Beatles and had introduced them on stage some 300 times.  This incident happened at Paul’s 21st birthday party, on June 18, 1963.  At the party, Wooler was joking around with John and said (with heavy gay intimations): “Come on John, what really happened with you and Brian? Everybody knows anyway, so tell us.”

John had been heavily drinking that night and Lennon was a notorious “bad drunk”.  In a blind rage, John proceeded to beat the stuffing out of a very surprised Bob Wooler, literally kicking him repeatedly in the ribs as he lay on the ground in a bloody heap.

According to John, the only reason he actually stopped the savage beating was because, “I realized I was actually going to kill him…  I just saw it like a screen. If I hit him once more, that’s really going to be it. I really got shocked and for the first time thought: ‘I can kill this guy.'”

Wooler was rushed to the hospital by Brian, who was also present at Paul’s party, and given treatment for a variety of things, including broken ribs.  Luckily for John Lennon- and the Beatles’ future amazing run- Wooler survived the ordeal.

Incredibly, John refused to apologize. “He called me a bloody queer, and I bashed in his ribs for it”, he said defiantly.  Because of this refusal to apologize, Brian had a writer for The Daily Mirror, Don Short, send a telegram on John’s behalf, apologizing.  The telegram read, “Really sorry Bob. Terribly sorry for what I have done. What more can I say? -Signed, John Lennon”  In addition to that, a payment of 200 pounds (around $2200 today) was also given as compensation.

Despite their very recent fame in Europe in musical circles, this incident actually got the Beatles their first national press coverage in England in an article in the Daily Mirror.  (One can easily imagine what kind of coverage an incident like this would have gotten nowadays, with our current tabloids, twitter, and the blogosphere.  And, of course, had Bob Wooler not been the forgiving type, he could easily have raked John over the coals, but chose not to. Or what if John had actually killed Wooler by perhaps kicking him a few more times with Wooler’s broken ribs perhaps puncturing his lungs?  It would have finished the Beatles as we remember them right there, not to mention the fact that John Lennon would have been sent to prison for murder!)

Despite the severity of the incident and the coverage in the Daily Mirror, the incident was soon forgotten and the Beatles went on to conquer the musical world.

The one murky question for Beatles fans is obviously “Did John and Brian really?…”  Beatles fans and aficionados have been debating the question all these years later.

In 1971, in his classic “Rolling Stone” interview, John stated that of all the Beatles he “was the closest to Brian”. (was this one of John’s inside jokes, did he really mean?…) John later briefly commented on the lingering question about Brian and himself shortly before his tragic death in 1980.  “It was almost a love affair, but not quite. It was not consummated. But it was a pretty intense relationship”, he said.

About the gay accusations setting him off, Lennon went on to add, “You know, when you’re 21, you want to be a man. If someone said it now, I wouldn’t give a shit”. (1980). But at the time, John was a very macho, young rock star and he had to prove it to everyone.

One marvels when looking at the incredible, unbelievable career of John Lennon- and the Beatles- at just how close it all came to going up in smoke, because of a needless, drunken beating, all those years ago at a birthday party.