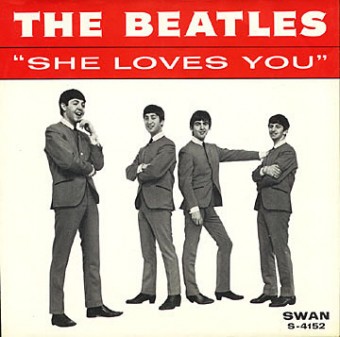 This is where Beatlemania begins.  Along with the then “shocking” Beatle haircuts, this song is “the” symbol, “the signature tune” of the early Beatles- the four happy, cheerful, chipper, and harmless moptops.  This is the Beatles before drugs, before Yoko Ono, before the facial hair, before the in-house fighting and bickering, before John said they were “more popular than Jesus.”

The song seems to encapsulate the image of the “early Beatles”- an image still held indelibly in the minds of millions of fans the world over.  “She loves you” was written by John and Paul in very unremarkable circumstances.  The two brilliant co-writers sat down in a hotel room on June 26, 1963 and dutifully knocked it out.  They finished it up at McCartney’s childhood home a few days later.  (This, by the way, was the first Beatles record of any kind with the publishing credit rendered as “Lennon-McCartney” rather than the other way around.  All songs written by John and Paul, even if one had written the entire song themselves, were credited to John & Paul jointly.)

That said, “She Loves You” seems to have been a genuine 50-50, half & half, collaborative effort.  At the time they composed it, the boys were on a bus tour as a back-up act to a teenage girl named Helen Shapiro.  The song itself is unusual for a love song, in that it is about a guy talking to another guy about a girl who loves the second guy.

John and Paul’s original idea was a call and response type of song.  According to Paul, the original plan was “a couple of us would sing, ‘She loves you’ (choruses) and the others would do the ‘yeah yeah yeah’ ones… Then John and I agreed it was pretty crummy idea… but at least we had the basic idea of writing the song.”

Thus, the call and response idea was ditched, and instead, the “yeah yeah yeah” was tacked on to the opening line, a chorus in the middle, and the finish.  The gimmick worked and the “yeah yeah yeah” became an early Beatles catchphrase.  (Paul’s father, a very proper Englishman, actually chided Paul for not using “yes yes yes” as the chorus.)

Another gimmick of John and Paul’s was the constant use of pronouns in their early song titles. “She Loves You” followed “Love Me Do,” “Please Please Me,” and “From Me to You” in the Beatles canon. Another pronoun title, “I Want to Hold Your Hand,” had actually preceded “She Loves You” to the top of the charts in America, and these two would be back-to-back number one hits for the Fab Four in early 1964. This rare event had only previously been accomplished by Elvis Presley in 1956.

Americans at large got their first earful of “She Loves You” (and eyeful of the Beatles themselves) on a film clip of the Fab Four on “The Jack Paar Show” on January 3, 1964, one month before the Beatles arrived in the U.S. for the first time.  Paar showed the brief clip and made a few withering, sarcastic remarks as the studio audience giggled at these strange-looking long-haired youths in their matching collarless jackets.

Despite this being the first widespread look at “She Loves You,” it was not the first time Americans had been exposed to it.  “She Loves You” was released a few times on various minor labels in the U.S. in 1963… It flopped.  Famed DJ Murray the K even played it to lukewarm reception with it placing third of five new singles he debuted that week.  For whatever reason, although the Beatles were already a smash act in England, the record buyers of America answered the early Beatles efforts with a yawn of disinterest. Of course, this would rapidly change.

British singer, Kenny Lynch, was a performer with the Beatles on their bus tour of 1963 and has clear memories of John and Paul.  According to Lynch, “I remember John and Paul saying they were thinking of running up to the microphone together and shaking their heads and saying ‘whooooo’.”

Lynch warned them against this radical idea, “You can’t do that. They’ll think you’re a bunch of poofs.”  But the boys did incorporate the hair-shaking shtick into their live performance of “She Loves You,” albeit with George and Paul, rather than with John, who once nearly killed a man (literally) for insinuating that John might be gay. As John said, “He called me a bloody queer, and I bashed in his ribs for it!”  Needless to say, John had no interest in appearing a “poof.” This brush with near murder, at the least, ultimately helped John change his ways.  As he said, “It was the last fight I ever got into. That’s when I gave up violence, because all my life I’d been like that.”

In any event, it turns out the head shaking worked and the bit by George and Paul drove the girls into a complete frenzy, as all four would do for the rest of their time together. And the rest, as they say, is history.