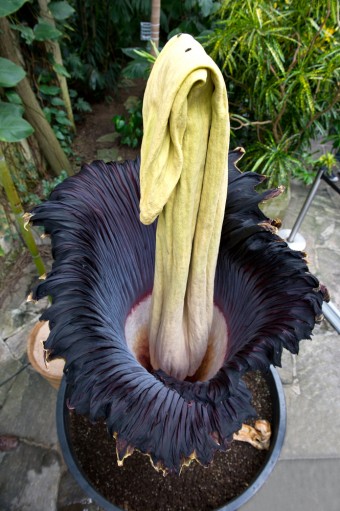 Deep in the heart of Indonesia’s Sumatra rainforest, where tigers hunt, rhinos stampede, orangutans play, and cuckoos sing, blooms a flower that does its very best to attract more attention than any of the animals. The rare Amorphophallus Titanum, or Titan Arum, or known by its more descriptive nickname the “Corpse Flower,” is described as the world’s largest flower. But that isn’t the plant’s claim to fame. No, this rare, beautiful fauna is really known for its stink.

It’s been said that the smell that emits from the Corpse Flower resembles, well, rotten flesh. From personal experience, it smells more like a port-a-potty or garbage that’s been left out in the sun. Either way, it’s not a pleasant aroma. The purpose of this smell is to attract pollinators, more specifically sweat bees, flies, and dung beetles. These insects are drawn to the smell because they think it is rotting flesh and a perfect place to lay their eggs. It’s a trick, but one that ensures the Corpse Flower’s survival. When the insects come in for a landing, they become covered in the plant’s pollen. After laying their eggs, they fly off to spread the pollen across the forest.

Despite the writing from the first European to discover the plant, Italian botanist and explorer Odoardo Beccari in 1878, the Corpse Flower is not a man-eater, nor even carnivorous. It is simply trying to imitate a pollinators’ favorite place. Botanist are still trying to figure out what exactly inside of the plant produces the smell. A sulfur-infused chemical is almost definitely present, giving it the tinge of rotten egg. Additionally, it is speculated that putrescine and cadaverine, compounds found in decaying flesh, are also involved. They are also found in other plants in the Aroid family (a group of plants known for their stench, like the “Skunk Cabbage.”) making it likely it has a presence in the Titan Arum as well. It is also believed that the plant produces heat, allowing the aroma to spread further out into the forest.

Despite the colloquial name, the Corpse Flower plant as a whole is actually not a single flower, but an inflorescence. An inflorescence is a cluster of flowers, in this case hundreds of male and female flowers – which botanists believe are the actual part of the plant that produces the stink – buried at the base of stem. There are two visible parts of the Titan Arum; the spathe and the spadix. The spathe is a petal-like outer covering, like the green layer that covers an ear of corn. On the inside of the spathe, which is only visible when the plant is in bloom, is a dark velvety purple maroon color that reportedly at times is akin to rotted flesh. The spadix is the fleshy upright column in the center of the plant that resembles a cactus without needles. When the plant is getting ready to bloom, the spadix can reach heights upwards of seven to eight feet tall.

What makes it even more unique is that it can take years for the Corpse Flower to reach the blooming stage. When it is not blooming, it still produces a “leaf,” which is actually many “leaflets” attached to a single green stalk (resembling a green palm tree). Even this can grow to decent-sized heights, topping out at twelve feet tall. Botanists still haven’t established any sort of timetable to mark when the Corpse Flower will bloom. Enough energy needs to be stored by the corm, the bulb-like tubular buried in the soil that the plant arises from, before a blooming occurs. This can take a year or forty years (typically 7-10 in cultivation), but when it does, a well-trained eye can spot what is happening early on in the growing process. The plant grows at a rapid rate, up to six inches a day, so fast you literally can see the change with the naked eye if you watch patiently. When the plant finally blooms, after potentially many years of waiting, the entire blooming cycle takes 24 to 30 hours- about twelve hours to completely unfurl its enormous spathe, then bloomed for a few hours (which is also when its stench is at its strongest), then, twelve hours to wilt away, perhaps taking another decade or more to bloom again.

When Odoardo Beccari and his men came across the plant in 1878, they were the ones who gave it the scientific-sounding name Amorphophallus Titanum. But if you know Latin, you know that name isn’t very dignified at all, as it is loosely translates to “misshapen gigantic penis,” a reference to the large spadix. Yup, this group of explorers turned this beautiful, stinky, rare tropical plant into an elaborate penis joke. It was actually the Indonesian natives that had named it “Bunga Bangkai,” meaning “dead man flower.” At the time, the flowers dotted the forests. Today, Indonesian officials believe it to be endangered due to the destruction of its habitat, the Sumatran rainforest.

The flower was so large that the explorers concluded that the only thing that could have pollinated it was an elephant. To study the plant further, Beccari had his men dig up the 130 pound specimen and drag it back to Italy with them. As Beccari wrote in his journal, “Two men could scarcely carry it!” Beccari also brought seeds with him and dispersed them among institutions. The first bloom in European captivity was at England’s Royal Botanical Garden in Kew (located near London) in 1889. The Corpse Flower was a sensation and attracted such a crowd that the police were called in for crowd control.

Another of the plant grown outside of its natural habitat didn’t bloom again until the mid 1920s. This first blooming of the Corpse Flower in the United States was at the New York Botanical Gardens in 1937, using seeds from the University of Bonn’s flower (in Germany). It was such a hit with the public, the plant was designated “the official flower of the Bronx,” which it remained until 2000 when that distinction was taken away by the Daylily.

Today, the Corpse Flower is much more common across the globe, known to attract pollinators and human visitors alike with its garbage dump-like aroma. There are believed to be over 80 Corpse Flowers in the United States right now, being meticulously tended to in botanical garden and conservatories. So, if you are a botany admirer or just a fan of that garbage-water-left-in-the-sun smell, there very well could be a Corpse Flower near you ready for its short and stinky closeup.