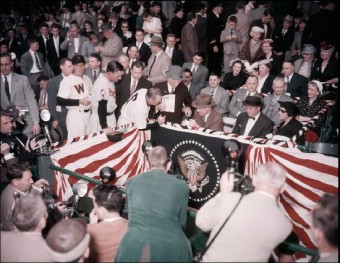 U.S. Presidents and sports have always been connected. Gerald Ford played football as a University of Michigan undergrad. George H.W. Bush played in the first two College World Series. George W. Bush was part owner of the Texas Rangers’ baseball franchise. Barack Obama frequently plays pickup basketball games with his staff (no doubt all terrified of accidentally hurting the Commander-in-Chief during the games.) Heck, Ronald Reagan even portrayed “The Gipper” in the football movie Knute Rockne, All American during his acting days. But only one U.S. President was ever a professional athlete, albeit for a very brief time. Evidence points to Dwight D. Eisenhower having played semi-pro minor league baseball in 1911 in Junction City, Kansas. Although for much of his life, this was something he chose to keep secret.  Had he not in the first few years after he did this, it would have changed the course of American history.

In 1911, baseball was really coming into its own in America. Stars like Walter Johnson, Christy Mathewson, Joe (not yet “Shoeless”) Jackson, and Ty Cobb, all future Hall of Famers, dominated major league baseball. The introduction of a livelier ball jumped started offenses. Frank Schulte had 21 home runs for the Chicago Cubs in 1911, the first time anyone had hit over twenty home runs individually in a season. Schulte and Cobb won the first Most Valuable Player Awards, receiving cars from Chalmers Automobiles as a reward from the sponsor. Attendance at baseball games rose across the country. Baseball had been popular since the late 19th century, but now professional teams began to pop up in every state, every city, every town in the country. This included the state of Kansas and Junction City.

The period between 1909-1913 was “Kansas’ golden age in the professional game,” according to the Kansas State Historical Society. By 1910, twenty five cities and towns in Kansas had at least semi-pro teams playing organized ball. This included bigger Kansas cities like Wichita and Topeka with Class A minor league baseball teams (equivalent to Triple and Double A teams today). It also included smaller towns with Class D semi-pro teams (equivalent to the lowest level of the minor leagues today), like Abilene, Clay Center, Ellsworth, and Junction City.

Junction City, called so because it was where the Wisconsin Valley Railroad intersected the Wisconsin Central tracks, actually wasn’t even its own village until June of 1911. Annexing itself from the nearby town of Carson, they held elections for officers in the village hall on the sixth of June. Twenty-three voters went to the polls that day and elected Jacob Skibba president of the village of Junction City. Despite not actually governing itself until 1911, Junction City had a baseball team in the Central Kansas League beginning in 1909. For the first two years of their existence, the Junction City Soldiers weren’t particularly good, never finishing higher than fifth in the league. As the 1911 season approached, the Soldiers, and all of the teams in the Central Kansas League, began to recruit new, young players.

Dwight D. Eisenhower was born in Denison, Texas on October 14, 1890. Two years later, the Eisenhower clan made the 400 mile trip north and moved to Abilene, Kansas, a place the General and President for the rest of his life considered his hometown. He was an active kid and, by his own admission, strove towards “excellence in sports, particularly baseball and football. I could not imagine an existence in which I was not playing one or both.”

When he was boy, he fell and hurt his knee, to the point where doctors considered amputation. In his autobiography At Ease: Stories I Tell To Friends, he recounted what he told his brother, Ed, when he heard the possible news,

When Ed got home, I called him and made him promise to make sure that under no circumstance would they amputate my leg. “I’d rather be dead than crippled, and not be able to play ball.”

The Eisenhower family didn’t have a lot of money, so both he and his brother, Edgar, had to take jobs to support themselves through school. They struck a deal not unlike the one later portrayed by the characters George and Harry Bailey in It’s a Wonderful Life (incidentally, Jimmy Stewart, who played George Bailey, in real life also became a General in the U.S. military).  The Eisenhower brothers agreed that while one of them went to school, the other would work to pay for it. The next year, they switched. According to a 1969 Time Magazine article, Dwight worked at a creamery in 1909 as part of this deal. While there is no actual written documentation at the time, there is significant evidence that in 1911, at the age of 21, he found a new job twenty five miles east of Abilene with the Junction City Soldiers semi-pro baseball team.

The primary evidence comes from several 1945 New York Times and Associated Press articles, written following Eisenhower’s return from the war. After arriving home, one of the first things the now-decorated General did was attend a baseball game between the New York Giants and Boston Braves. In one of the articles, the Times quotes Mel Ott, then-manager of the Giants and future Baseball Hall of Famer, that the “general admitted that he done so (played pro ball), under the assumed name of Wilson.”

In a separate story from the same game, the Times reported on a “brief, informal chat” with the two managers (Ott and Braves’ manager Bob Coleman) and the General. This chat included an admission from the General himself that playing baseball professionally was the “one secret of my life.” He went on to explain that he played in the Kansas league. When asked what position he played, Eisenhower joked, “That’s my secret.”

There was, in fact, a “Wilson” who played centerfield for the 1911 Junction City Soldiers, at least according to the definitive baseball archive Baseball Reference. This “Wilson” didn’t play very much, only appearing in nine games with 31 at-bats. He did have eleven hits though, good for a .355 batting average, and was perfect in the field with eleven chances and eleven putouts, for whatever that’s worth.

Later that month, in an interview with the Associated Press in his hometown of Abilene, Eisenhower went further,

I was a center fielder. I went into baseball deliberately to make money, and with no idea to make it a career. I wanted to go to college that fall, and we didn’t have much money. I took any job that offered me more money, because I needed money. But I wasn’t a very good center fielder, and didn’t do too well at that.

In 1911 (possibly during the baseball season), Eisenhower was accepted into the prestigious West Point, readying himself to be in the Army and for his illustrious future ahead. When he arrived, he immediately tried out for the JV football and baseball teams. He made both. A baseball teammate of his was Omar Bradley, who also went on to become a famed World War II General.

It was actually Eisenhower’s football career that was a lot more promising. He became a star running back on the varsity team his sophomore year. The New York Times called him, “one of the most promising backs in Eastern football.”

So how would any of this have changed American history?  I mean, he played in a few semi-professional baseball games.  Big deal.

Here’s the thing. In order for one to participate in college athletics, one must be an amateur athlete, as in someone who has never made money playing sports. Playing semi-professional baseball, no matter if it was for love of the game or financial reasons, should have disqualified Eisenhower from making the football team. Yet, he told no one of his semi-pro past.

Again, so what?  He’d just get kicked off the team if they found out, right?  Not quite. The Cadet’s Honor Code states “”A cadet will not lie, cheat, steal, or tolerate those who do.” While the Code didn’t get formally written until 1922 (with the impetus from then-Superintendent of the Academy Douglas MacArthur), it was still very much applied and honored. Today, Cadets have to sign such a pledge. It is not known if in 1911 West Point required an actual signature as well. Either way, an “officer’s word was his bond” and deliberate violation of this was a serious offense in the eyes of the school.

By 1945, Eisenhower (or at least someone close to him) realized that thanks to his little lie, maybe it wasn’t such a good idea for him to talk about his semi-pro career, especially if he had political aspirations. In fact, within the collected presidential papers at the Eisenhower Presidential Library in Abilene, KS in “A Guide to the Historical Holdings of the Dwight D. Eisenhower Library – Sports and Recreation,” there is this:

DDE did play professional baseball one season to make money, he did make one trip under assumed name (did not say whether Wilson or not). But, he says, not to answer this because ‘it gets too complicated.’

If he had been found out while still in school, he would been kicked out and the world would have likely never known the name Dwight D. Eisenhower.

Then again, this may have suited Eisenhower just fine. Later in life, he told the press this story,

A friend of mine and I went fishing and as we sat there in the warmth of a summer afternoon on a river bank we talked about what we wanted to do when we grew up. I told him I wanted to be a real major league baseball player, a genuine professional like Honus Wagner. My friend said that he’d like to be President of the United States. Neither of us got our wish.