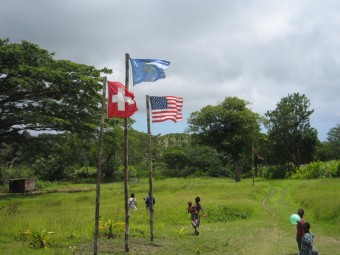 “When the outside world, with all its material wealth, suddenly descend[ed],” on remote cultures whose technology was limited to stone and wood, new belief systems often arose.

On many of the islands of the southwest Pacific, the affluence and power of Western explorers, missionaries and colonists led to the creation of a number of religious sects that all shared a focus on the invaders’ material wealth. Part magical thinking, part myth, part hybridized Christianity, most of these cargo cults lasted only a few decades in the mid-20th century. The most prominent remaining cargo cult today is that of John Frum.

The invasion of the West had a dramatic effect on the people of Melanesia (including the islands of Fiji, New Guinea, New Hebrides and the Solomons): “The sudden transition from the society of the ceremonial stone ax to [that] of sailing ships and now of airplanes has not been easy to make.”[i]

Among the most notable impacts on Melanesian society was the belief that white people had a magical power to summon necessary and desirable trade goods, known in the pidgin English of the islands as “cargo.”[ii]

Early on, along with the Europeans’ goods, often travelled Christian missionaries who spread Biblical stories that vaguely resembled Melanesian myths, like that of Mansren:

Long ago there lived an old man named Manamakeri . . . . Eventually he trapped . . . the Morning Star. In return for his freedom, the Star gave the old man a wand . . . . Manamakeri, aged as he was, now magically impregnated a young maiden [who bore] . . . a miracle-child . . . . The trio sailed off in a canoe crated by Mansren (“The Lord”), as the old man now became known [and he] rejuvenated himself by stepping into a fire . . . . He then sailed around . . . creating islands where he stopped, and peopling them with the ancestors of the present day Papuans.[iii]

The Christian apocalypse was a favorite among the islanders as it mirrored a Melanese version, where after the cataclysm: “God, the ancestors or some local hero will appear and inaugurate a blissful paradise on earth. Death, old age, illness and evil will be unknown. The riches of the white man will accrue to the Melanesians.”[iv]

After decades of a steady stream of colonial goods, the enormous influx of supplies brought by the occupying armies of World War II must have been overwhelming. As a result, various cults of prosperity developed across the islands, including among the Papuans on New Guinea: “Some of the islanders now began to draw together into large ‘towns’; others took Biblical names such as ‘Jericho’ and ‘Galilee’ for their villages. Soon they adopted military uniforms and began drilling.”[v]

Significant to the development of these religions was the Melanesian belief that “man’s activities needed magical assistance,” which was called upon through ritual.[vi] This conception, combined with an increasing belief that there was a “secret” to summoning the cargo that white people kept from them, generated some of the most unique aspects of these groups:

So strong is this belief in the existence of a “secret” that the cargo cults generally contain some ritual in imitation of the mysterious European customs which are held to be the clue to the white man’s extraordinary power over goods and men. The believers sit around tables with bottles of flowers in front of them, dressed in European clothes, waiting for the cargo ship or airplane to materialize.[vii]

Eventually, as their efforts continued to fail to bring the cargo, most of these groups disappeared. One of the few (and perhaps the only) remaining cargo cult is that of John Frum.

Today, centered around the village of Lamakara, located at the edge of Sulphur Bay in the shadow of an active volcano on the island of Tanna, Vanuatu (formerly New Hebrides), the cult of John Frum awaits: “A ghostly American messiah, John Frum . . . [who] promised he’ll bring planeloads and shiploads of cargo to us from America if we pray to him . . . . Radios, TVs, trucks, boats, watches, iceboxes, medicine, Coca-Cola and many other wonderful things.”

Many trace the lineage of John Frum back to the large American military bases that were built in the New Hebrides during World War II, and their surfeit of consumer goods: “Where the U.S. armed forces go, so go the legendary PXs,with their seemingly endless supply of chocolate, cigarettes and Coca-Cola . . . [and] the Americans . . .[who] paid [natives] 25 cents a day for their work and handed out generous amounts of goodies.”

Even more than the Americans’ generosity and abundant wealth, the Tanna were impressed by the relative integration of the U.S. armed forces, where they saw for the first time: “Dark-skinned soldiers eating the same food, wearing the same clothes, living in similar huts and tents and operating the same high-tech equipment as white soldiers.”

So affected were they with the relative equality of African-Americans, that they built a belief system that incorporated American values and symbols, such as the American Red Cross logo (which is today the cult’s most sacred symbol) and even envisioned an American as their messiah. Depending upon the sect, however, this John Frum may be either: “A black Melanesian . . . a white man . . . [or] a black American GI.”

In fact, because of this last, some aver that the name “Frum” is simply a pidgin form of “from,” and that the saviors entire name is “John Frum (from) America.”

Along with this love for American culture came a concomitant return to traditional ways of living and worship, called kastom (pidgin for custom), such as: “Kava [an alcoholic beverage] drinking [and] . . . dancing, because the missionaries and colonial government were deliberately destroying our culture.”

In addition, the Tanna began rejecting the trappings of white rule, including refusing to attend Christian church (as mandated by colonial authorities), and even more significantly:

‘Cultists’ began to destroy all their Western possessions, throwing their hard-earned money into the sea. . . . as an act of faith . . . . [Eventually] the Sabbath migrated to Friday, on which day John Frum was celebrated with singing, dancing and kava-drinking, a joyful inversion of the dour Presbyterian past. . . . . Finally, on February 15th 1957, an American flag was ceremonially raised in Sulphur Bay and the new religion officially announced . . . .

Today, followers believe John Frum lives in the crater of the nearby sacred volcano, Yasur. Although other observances are made, believers pull out all the stops on February 15th (now known as John Frum day):

A slight, bearded man in a blue suit and ceremonial sash, leads the uniformed men . . . . some 40 barefoot “G.I.s” suddenly emerge . .. marching in perfect step and ranks of two past [the chief]. They tote bamboo “rifles” on their shoulders, scarlet tips sharpened to represent bloody bayonets, and sport the letters “USA,” painted in red on their bare chests and backs.

In addition, several flags are raised including those of Vanuatu and the United States. Although perhaps this may seem childish to modern western eyes, Vanuatu’s sophisticated leaders support and respect these John Frum ceremonies because: “The John Frum Movement were the first heroes of the independence movement . . . . They were the first to speak out against colonial rule. John Frum’s message was that we should return to kastom ways, to keep our identity.”

As such, for them the cult is less about an obsession with consumer goods, and more: “A reminder of our history [and] the Americans helped us…”

Nonetheless, the extraordinary rituals of the cult, combined with the lack of any demonstrable salvation, have caused many, particularly in the west, to challenge the authenticity of John Frum as a religion. Undeterred, one believer replied: “You Christians have been waiting 2,000 years for Jesus to return to earth . . . and you haven’t given up hope.”