April 9, 2014 TheMedicineJournal.com 38 comments
Our resident medical expert, Scott, and a buddy of his recently started The Medicine Journal, where you can learn all sorts of interesting facts about all things medical related. Below is a sample article from their site. 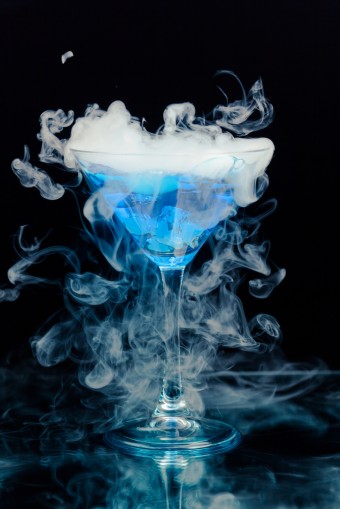 Vaporizing, and then inhaling alcohol has gained a lot of attention lately.  In the 1950s it was introduced as a treatment for excessive fluid in your lungs, called pulmonary edema.  It’s now gained popularity as a way to quickly become intoxicated.  Proponents of this process-to-become-plastered, tout several benefits compared to drinking it.  Many claim you get drunk without any calorie intake.   Some state, because you bypass the liver, you can eliminate the alcohol quickly and avoid the dreaded alcohol hangover.

Just about every medical professional commenting on this method of intoxication have warned of the very real consequences.  All while knowing doctors can use the process to treat some life threatening medical conditions.   Before you go to your next college-frat-party and smoke your way to a buzzed-bliss, let’s take an in-depth look at the benefits and risks of inhaling alcohol.

Inhaling any substance, as long as the molecule is small enough, is one of the fastest ways to get it in your bloodstream.  This is because the barrier between your blood and the outside environment is so easily penetrated.  When you inhale air, and all of its impurities (in this case alcohol), the vapor easily crosses the capillary beds that reside in the small air sacs within your lungs, called alveoli.

Once inhaled, the oxygen and alcohol are in higher concentrations than in your blood.  They naturally migrate across the alveoli membrane, equalizing the concentration of those molecules on both sides of it.  This process is called diffusion.  The level of carbon dioxide within the blood is higher than the outside air, and as such, it will also diffuse across the membrane to the environment.  The wonder of a breath is revealed!  This entire process happens almost instantaneously.

Any respecting medical student knows there are a few other ways you can get alcohol in your blood stream.  Compared to inhalation, they all require much more time.  Drinking requires it be broken down by your digestive system.  Absorbing alcohol through mucus membranes, like placing alcohol drops in the eyes, or alcohol enemas, require more time because the absorption rate is much slower than the diffusion within the lungs.

Let’s look at some of the advertised benefits of inhaled alcohol.

Calorie reduction by inhalation is not quite all it’s cracked up to be.  There are only four types of nutrients that have a measurable amount of calories.  Alcohol is one of them.  The other three are carbohydrates, proteins, and fats.  It doesn’t matter if you drink the alcohol, or inhale it, the calories consumed will be proportional to the amount of alcohol taken in.  The caloric savings comes from the reduction of the carbohydrates within the liquids, namely the sugars.

Normally alcohol is removed from the body in three ways.  About 5% is excreted by the kidneys in your urine.  Around 5% is exhaled by your lungs, in the process of diffusion.  This is why breathalyzers are such a great way of determining blood alcohol levels (don’t drink and drive kids). The remaining is chemically broken down by your liver into acetic acid.  There has never been a human study that focused on comparing alcohol elimination times of the different intake methods. There were however, animal studies done in the 1970s, showing ethanol elimination from inhalation was significantly faster compared to ingestion.  The exact mechanism of this elimination, compared to ingestion, was not mentioned.

Don’t think this increased alcohol elimination in animal studies is a good thing.  By bypassing the liver, and its ability to change alcohol to acetic acid, the inhaled alcohol has a much higher strength and its effects becoming more potent.  This might seem enticing to college fraternities, but it’s tremendously overshadowed by the potential harmful consequences.  Overdose (alcohol poisoning) is potentially the most deadly.

Alcohol is a potent central nervous system depressant.   If the level within the blood is high enough, it causes things like: respiratory depression, seizures, and hypothermia.  It can also cause the loss of your gag-reflex.  When combined with vomiting, it can lead to aspiration.  Drowning in your own vomit on a strangers bathroom floor  isn’t the noblest way to end your life.

Bypassing the digestive system eliminates the body’s natural overdose deterrent, vomiting. The methods currently used by people to vaporize alcohol make it extremely difficult to measure the exact amount inhaled.  Even in sober conditions. The inevitable change in mental state also contributes to this difficulty.  The term coyote-ugly comes to mind.

This rapid intoxication, combined with the problems of measuring the amount consumed, leads to a much greater risk of overdose.  It is true, there have been no actual scientific studies looking at the adverse effects of inhaling alcohol, but based on the mechanism of ingestion, most medical professionals agree the potential for deadly consequences is considerable.

Additional concerns about inhaling alcohol revolve around addiction.  Most people who try this form of intoxication describe rapid, and much more intense, reaction.  The “quick-hit” reinforces addictive effects.  Inhaling alcohol also has the potential to damage the lining of your respiratory tract and lungs, predisposing you to a higher risk of lung infections like pneumonia.

While the party-fueled vaporization and inhalation of alcohol is extremely dangerous, there are some real medical benefits when done appropriately.  In 1954, Dr.’s Aldo Luisada, Morton Goldmann and Ruth Weyl used this as a method for treating pulmonary edema, resistant to all other forms of therapy.

The fluid in the lungs, associated with pulmonary edema, contain blood elements that get churned into a froth by the act of breathing.  This leaves foam-like bubbles that make it extremely difficult to diffuse oxygen through the capillary beds.  By bubbling oxygen through a 50% ethyl alcohol solution, the frothy bubbles collapse making it easier to breath.  It’s thought the alcohol alters the surface tension of the bubbles, causing the collapse.  The resulting sputum is also more liquid and is much easier to expel from the lungs.

Another well accepted treatment using alcohol inhalation is in the prevention of alcohol withdrawals post-surgery.  As with any physically addictive substance, when you stop using, withdrawals occur.  Known as Alcohol Withdrawal Syndrome (AWS), the symptoms can be deadly.  In 1908, when hospitalization was uncommon, the mortality rate of AWS was around 37%.  Currently, the mortality rate for patients in a hospital is around 6.6%.  Since even those addicted to alcohol sometimes need surgery, doctors are left with the problem of preventing AWS while they’re recovering.

Medications, known as benzodiazepines, are commonly used.  The intravenous infusion of ethanol is also sometimes administered.  The inhalation of alcohol is becoming widely accepted.  Some doctors even prefer it, claiming it’s easier to control than ethanol infusion.  They also cite the added benefit of increased oxygen levels post-surgery, because oxygen is bubbled through the alcohol.

Whether used for the treatment of pulmonary edema, or AWS, doctors constantly monitor the amount of alcohol inhaled.  They also continually monitor the blood alcohol levels, keeping them in a range that is high enough to get the results they want, while low enough not to cause any unwanted problems.  This ability to monitor the exact amounts of alcohol are what make it safe in a hospital environment compared to the do-it-yourself, at-home methods.

In the end, if you choose to vaporize and inhale alcohol, it will get you drunk very quickly.  You will however, increase your chance of a deadly overdose and potential addiction significantly.