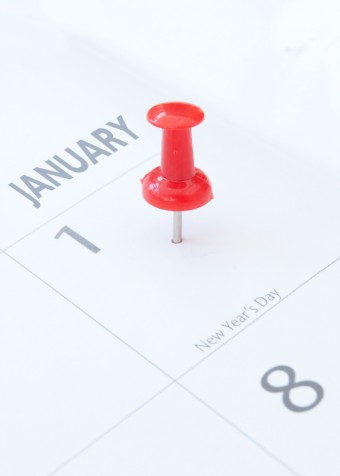 Because Julius Caesar said so.

Since long before Caesar’s time, date keeping was dicey. In fact, the 355-day Roman calendar that immediately preceded Caesar’s Julian, worked on a four year cycle where every other year, an additional month was inserted between February (Februarius), the last month of that calendar year, and March (Martius), the first month of the year; this was done in order to catch the calendar up with the Earth’s orbit of the Sun. That additional month, called the Mensis intercalaris, brought in the missing 22 or 23 days, and to even things up, took another five days from February in the years it was present.

Since the calendar had been designed to ensure the proper observance of religious dates, priests, called pontifices, were responsible for declaring when the interclaris month should begin and end. Since these priests were also involved with politics, they sometimes:

Misused their power by intercalating days or not intercalating them, merely in order to lengthen or shorten some magistrate’s year of office, or to increase the gains of some government contractor, or to inflict loss upon him.

By the time Caesar came around, the Roman calendar was in shambles, and in 46 BC, Julius Caesar commanded that it be changed.

The Julian calendar’s beginnings were as crazy as the old Roman calendar at its worst:

In order to wipe out the consequences of past neglect, it was necessary that the year 46 BC (called by Macrobius the annus confusionis) should extend to 445 days. The normal number of 355 days had already been increased by the addition of the ordinary 23 days, inserted after Feb. 23. As many as 67 days, divided into two menses intercalares . . . were now interposed between November and December. . . . This year thus consisted of 15 months.

After this “year of confusion,” the new calendar really started. Intercalation was abolished, and each year was increased to 365 days, with a leap year added every fourth year (quarto quoque anno) to February. The months of the calendar after Caesar’s shake-up followed the old Roman calendar closely and most are familiar to us even today: Ianuarius, Februarius, Martius, Aprilis, Maius, Iunius, Guintilis, Sextilis, September, October, November and December.

Along with these changes, Caesar set the New Year to January 1.  Why? Since 153 BC, January 1 was the day new consuls in Rome took office and Romans had commonly used the name of the two consuls to identify a specific year in question.  Thus, by officially making January 1 start the New Year, it simply lined up with the consular year.

One proposed reason for this switch is that January is thought by most to have been named after the god of transitions and beginnings, Janus, during the reign of the second King of Rome, Numa Pompilius, who lived from 753-673 BC.  Thus, it was naturally enough for the Romans to eventually decide to make the switch. However, whether this is the reason or not is very much up for debate.

Although the Julian Calendar was relatively accurate, its use of 365.25 days in a calendar year, as opposed to the precise 365.2425 days, over centuries, created a discrepancy in the calendar. In fact, by the time Pope Gregory XIII (1572-1585) became the Bishop of Rome, the Julian calendar had lost 10 days.

It was this discrepancy that brought about the reformed calendar. Actually beginning 20 years before the calendar took effect with the Council of Trent in 1563, church leaders wanted to restore the spring equinox to the date it was when the First Council of Nicaea was convened in 325 (by 1563, the equinox was falling on March 11, rather than March 21).

Today, the Gregorian calendar is the unofficial calendar of the United States and the United Nations, as well as most countries in the world.

Since before even Caesar’s time, people celebrated the New Year. In ancient Babylon, this began after the spring equinox in March, and part of the celebration including subjecting the king to ritual humiliation. In fact, “if royal tears were shed, it was seen as a sign that Marduk [a god] was satisfied and had symbolically extended the king’s rule.”

After he was murdered by a small group of his “friends” (“Et tu, Brute?”), the Roman Senate made Caesar a god on January 1, 42 BC, a date which coincided with the time-honored practice of making offerings to Janus in the hope of having good fortune throughout the year.

Throughout the Middle Ages in Europe, January 1st’s New Year’s celebrations were discouraged, as they were seen by church leaders as a pagan practice.  Instead, other days were often used as a substitute varying from nation to nation.  This changed when the Gregorian calendar was instituted and, at least in the Catholic nations, January 1 once again became the official New Year, and it slowly spread from there with the Gregorian calendar.

A Companion to Latin Studies

Having a ball: The history behind American New Year’s Eve celebrations

History of Our Calendar

Why is this a holiday?