Where Did The Time Go: The Phantom Time Hypothesis 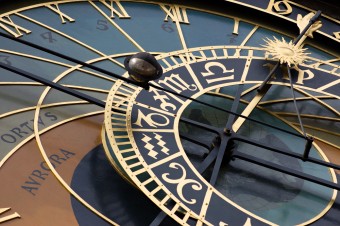 Everyone has had a moment in their life where they’ve muttered to themselves, “Wow, where did the time go?” It may have been after a wild night of partying, or a great conversation with a friend, or while intensely concentrating on a project. Sometimes hours can feel like minutes, weeks feel like days, years feel like months. Time comes and goes, quickly vanishing into the ether. For those who lived during the years of 614 to 911 AD, a period of 297 years, it could feel like it never even happened. That’s because, according German historians Herbert Illig and Hans-Ulrich Niemitz, it never did.

Let’s start at the beginning… the beginning of recorded time. The world’s oldest calendar is believed to date back to 8,000 BCE, according to the Royal Commission on Ancient and Historical Monuments in Scotland. Using lunar phases, hunters and gatherers developed a rudimentary calendar in the fields of Scotland to track the lunar months and changing seasons.  As the world’s civilizations evolved, they each developed their own individual calendars based on lunar phases and harvest seasons. The Babylonian calendar began a new month when a crescent moon was first spotted low on the horizon in the western sky. The much-studied and complex Mayan calendar had twenty day months and two calendar years, the 260 day Sacred Round and 365-day Vague year. Every 52 years, these two calendars conceded and created a “bundle,” which was roughly equivalent to our modern hundred year century.

As the Roman Empire rose through the last centuries of BCE, they brought their own calendar that they forced upon conquered foes. With the help of Sosigenes, a renowned astronomer from Alexandria, Julius Caesar helped develop a new calendar in 46 BCE, based on the Roman’s calendar. The Julian calendar was 365 days a year (with a leap day every four years) divided into twelve months.  It was based on the sun (a tropical year), rather than the moon.

Starting on January 1, 45 BCE, the Julian calendar was the predominant calendar in much of the world for the next 1600 years, until Pope Gregory XIII instituted the Gregorian calendar in 1582.  The reason for doing this (besides power and influence) were three-fold: he wanted to make the sure the celebration of Easter would always coincide with the spring equinox; to erase the ten day error that had accumulated over the last 1600 years due to each year in the Julian calendar being roughly 11 minutes and 14 seconds longer than the actual year; and to change the leap year from every four years to 97 out of every 400 years (every 4.124 years) in order for the accumulation of days not to happen again. Pope Gregory’s revisions stuck and the Gregorian calendar is still in use today.

A German historian by the name of Heribert Illig first published in 1991 that he believed that are actually 297 years missing from time, that we do not live in 2013, but rather 1716. These missing years were caused either “by accident, by misinterpretation of documents or by deliberate falsification.” Some missing time could certainly be accounted for due to the switching of calendars throughout the centuries that led to miscalculations and human error. Even after centuries, according to Illig, this missing time should only have amounted to days or months, not 297 years. In fact, one simple calculation revealed that Pope Gregory had made an error… it had been almost thirteen days, not ten, that accumulated over the 1600 years on the Julian calendar. This was clearly a human error, but a minor one at that. So the question remained, where did all that time go?

Fellow historian, colleague of Illig’s, and Phantom Time Hypothesis believer Dr. Hans-Ulrich Niemitz, cited in a 1995 research paper (revised in 2003) several examples of evidence that, at least to him, prove that 614 AD to 917 AD never happened. The Chapel of Aachen, supposedly built in 800 AD, had architecture similarities to chapels constructed over 200 years later. During this time period, the Byzantine Empire underwent massive government reform, yet “no historical sources exist for the supposed reform in this period.”

Neimitz uses the lack of documentation of the wide expansion of the Islam religion throughout Persia and Europe and the Jewish people’s inactivity during a time of great upheaval as evidence as well. By connecting all the dots, explains Niemitz, it becomes clear that 297 years is missing from the histories of many different cultures and civilizations.  Said Niemitz, “Nobody looks over the whole situation and therefore nobody is astonished that the same structural problems occur in different disciplines.”

Towards the end of the research paper, Niemitz asks the question that he knew would be at the forefront of the readers’ minds: “Who (and when and how and why) falsified history by adding 300 years?” He argues that the Catholic Church constantly falsified documents that upheld their theology, which, according to him, is well known in all historical circles,  Who’s to say that they didn’t falsify documents that added time – days, months, years – in order for customs/relics/decrees to be perceived older than they actually were in order to add credibility to the relatively new religion?

Another theory centers around the Roman Emperor Otto III and his desire to make sure his reign happened in 1000 AD to show that he understood “Christian milleniarism.” In order to do this, he had to falsify years to fill the missing time (and to invent Charlemagne in his image – who “lived” from 742-814 AD).

Niemitz also hypothesizes (with the help of “famous Byzantinist” Peter Schreiner) that the Emperor Constantine VII had the entire Byzantine history rewritten and told his “transcribers” to destroy the originals. “It is not important to explain the motivation of the emperor Constantine VII. I only want to demonstrate, that an action of rewriting and faking like this has happened. If it could happen in Byzantium, it might have happened at any other place, too,” summarizes Niemitz.

That last line from Niemitz is exactly why other historians believe that the phantom time hypothesis is hard to fathom. All of the evidence that both Neimitz and Illig cite is circumstantial. It is like the case for Santa Claus. If nobody has SEEN evidence that he doesn’t exist, he COULD exist.

In addition, if these 297 years never happened, then it would have meant that many historical figures (not just Charlemagne) never existed and would have required a plot/cover-up the likes of which would be impossible. For example, the Tang Dynasty existed in China, supposedly, from 618-907 AD, right in the phantom time wheelhouse. According to Steven Dutch, a professor of  Natural and Applied Sciences at the University of Wisconsin-Green Bay, in order for this hypothesis to be true that “someone from medieval Europe (had to have) convinced the Chinese to create a fake dynasty complete with bogus archives.”

Taking all the information and evidence, it seems the answer to the question from the very beginning of “where did the time go?” is absolutely no where.