This Day in History: December 13th 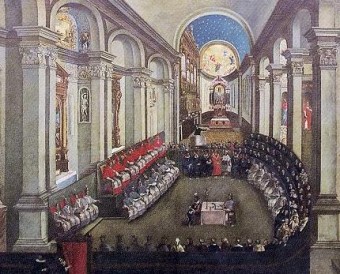 The Council of Trent, which began on this day in history, 1545, was the Catholic Church taking stock after the drama and challenges presented by Luther and the Protestant Reformation. Despite internal bickering, external dangers and a couple of lengthy interruptions in the proceedings, the council was indispensable in revitalizing – and rehabilitating – the Catholic Church in certain areas of Europe.

When Martin Luther nailed his 95 theses to that church door in Germany, not everyone rallied to his cause. There were those Catholics who preferred to reform the already existing Church rather than breaking away to form a new one, which many believed was heresy.

The Council conceded those in high positions in the Church had become far too worldly, that bribery was common, and the selling of indulgences was completely out of hand. Some in the Church felt these wrongs needed to be addressed, while still others saw them as “perks” of the job that they were reluctant to part with.

Charles V, the Holy Roman Emperor, stressed the importance of reaching compromises with the Protestants as much as possible. One issue that had inflamed Luther and sparked the Reformation was the selling of indulgences – the practice of selling a place in Heaven to the “faithful” in exchange for donations to the Church, despite this practice being somewhat blasphemous and certainly not scriptural.

Knowing that Luther’s rebellion had been largely prompted by corruption, the Council condemned the many abuses that had been commonplace in the Church, such as avarice, nepotism and sexual misconduct.

The Council also dealt with matters pertaining to doctrine. Not surprisingly, it rejected almost every contemporary Protestant teaching in favor of traditional Catholic Church dogma.

The Council maintained that there were seven sacraments necessary for salvation, not the two put forth by the Protestants. The Catholic belief of transubstantiation, which holds that during the Mass, the bread and wine literally are transformed into the body and blood of Jesus Christ, were re-affirmed.

As far as the issue of justification, they could not support the idea of salvation by faith alone. The Council affirmed that no person could ever know for sure if he or she was justified, and that good works are an important part of entering in to Heaven.

On issues pertaining to the Scriptures, the Roman Catholic Church moved even further away from the Protestants. Luther and his ilk had been translating the Bible into the languages of the common man, which opened the Bible up for discussion among non-clerics. The Catholic Church maintained the only true version of the Bible was the Latin Vulgate, and private interpretations that deviated from Church teachings were dangerous and heretical. The council also rejected the Protestant idea that Scripture alone was enough to bring man to God, adding that traditions preserved by the Church were also a source of authority.

The Council of Trent served its purpose of bringing much needed reform to a corrupt and nearly broken Roman Catholic Church. It honed the Church’s structure and doctrine, and defined the organization until Vatican II in the 1960s.

It also made the gulf between Protestants and Catholics impossible to bridge. The differences in doctrine were just too deep and fundamental to broker a reunion. Any hopes of turning back the clock abruptly ended with the Council of Trent.