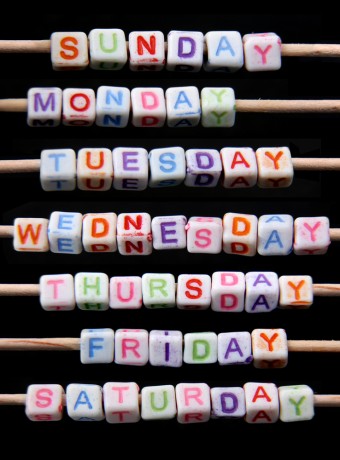 Today I found out why we have a seven day week and the origins of each day’s name.

You’ll notice I used the word “approximate” a lot in there.  This is because the moon phases don’t line up perfectly with this schedule.  As such, as far back as the 6th century BC (which incidentally is also around the time the Jews were captives in Babylon), the Babylonians would sometimes have three seven day weeks, followed by an 8-9 day week, presumably to re-synchronize the start and end of the weeks to match the phases of the moon.

By deistic decree, the Jews also followed a seven day cycle with the seventh day- the Sabbath-  to be a day of rest and worship.  In fact, the word “Sabbath” comes from the Hebrew “shabbath”, meaning “day of rest”, which in turn comes from the Hebrew “shabath”, meaning “he rested”- thus resting in homage to God resting on the seventh “day” after creating the universe. (Note: some biblical scholars believe the “day” here, in terms of six “days” to create the universe, one to rest, is more accurately translated as “period” or “interval” rather than a literal Earth day.  This is perhaps not unlike the “40 days and 40 nights” Jewish saying being a non-literal ancient Jewish expression simply meaning “a really long time”.)

Unlike the Babylonians, where it appears they were attempting to follow the lunar cycles with their seven day week, it isn’t known why the Jews picked seven days, outside of Christians and Jews of course believing that it was by the decree of God.

Whatever the case, the Ancient Romans, during the Republic, did not use a seven day week, but rather went with eight days.  One “eighth day” of every week was set aside as a shopping day where people would buy and sell things, particularly buying food supplies for the following week.

Rather than labeling the days of the week with actual names, at this time the Romans labeled them with letters, A-H.  You might think from this that the “H” was always the shopping day, but this isn’t correct.  You see, the calendar year did not divide evenly by eight.  Thus, the day of the week that was the day to go shopping changed every year, but they still often referred to days based on its proximity to the shopping day.

So now what about the origins of the names of the days of the week?  Ancient Mesopotamian astrologers assigned each day the name of a god. The Greeks later called these days “theon hemerai”, or if that’s all Greek to you, “days of the Gods”. In a culture where days were consumed by religion, it’s only natural that the days of the week were made in homage to the gods thought to rule the lives of mortals. The days of the week follow the same trend as the months of the year, many of which (including January and March) are named after gods from several different pantheons.

While different societies start the week on different days—usually Sunday or Monday—I’ll start with Monday, which was named for the moon. It could be translated as “Moon’s day”. This homage to the moon can be seen in several other languages as well. In Latin, it’s “dies lunae”, or “day of the moon”. In ancient Greek, “hemera selenes”, which means the same thing. In more modern languages, Monday is “lunes” in Spanish and “lundi” in French, both of which come from the root word for moon—”luna” and “lune” in each respective language.

Tuesday is the first to be named after a god. It was named for Tiu, or Twia, a lesser-known god of war and the sky from the English/Germanic pantheon. He is also associated with the Norse god Tyr, who was a defender god in Viking mythology. However, Tuesday does not translate the same in other languages. In Latin, it’s “dies Martis” or “Day of Mars” and in ancient Greek it’s “hemera Areos” or “day of Ares”. Both Mars and Ares were gods of war like Tyr and they lent their names to day of the week translations for other modern languages. Tuesday is “martes” in Spanish and “mardi” in French, both named for the Roman god Mars.

Wednesday can be translated as “Woden’s day”. Woden, associated with the Norse god Odin, was the chief god and leader of the wild hunt in Anglo-Saxon mythology. Directly translated, “woden” means “violently insane headship”, and does not put one in mind of the best of gods. Unlike the other days of the week, the gods named in the Latin and Greek days of the week – Mercury and Hermes —  are not associated with violent leadership, but with travel, commerce, and theft. Both are messenger gods. It is for Mercury that Spanish and French decided to name Wednesday—”miercoles” and “mercredi” respectively.

Thursday is one of the easiest days to translate, meaning “Thor’s day”. Named for the Norse god of thunder and lightning. Thursday is also associated with Jupiter in Latin (“dies Jovis”) and Zeus in Greek (“hemera Dios”). All three gods are known for their storm-creating abilities, but while the English language took Thor as its god for Thursday, Spanish and French adopted Jupiter instead, naming Thursday “jueves” and “jeudi” which have roots in Jupiter.

Friday is associated with Freya, the Norse goddess of love, marriage, and fertility. The Latin, “dies Veneris”, and the Greek, “hemeres Aphrodite”, call upon the goddesses Venus and Aphrodite instead. The latter two goddesses are also patrons of love and beauty, and all three goddesses are called upon in womanly matters like fertility and childbirth. Following the trend of the other days, Spanish and French adopted Venus for Friday rather than Freya, naming their days “viernes” and “vendredi”.

Saturday in English derives from “Saturn’s day” which was taken from the Latin, “dies Saturni”. Saturn was a Roman god and, over different periods of time, associated with wealth, plenty, and time. The day in Spanish and French (“sabado” and “samedi” respectively) was named simply as it is the Jewish Sabbath- “sabado” deriving from the Latin “sabbatum”, meaning “Sabbath”, and “samedi” deriving from the Old French “samedi”, which in turn comes from the Latin “dies Sabbati”, meaning “Day of the Sabbath”.

Sunday is “Sun’s day”, translated in both Latin (“dies solis”) and Greek (“hemera helio”) as “day of the sun”. Interestingly, in Spanish and French (“domingo” and “dimanche”) it is more closely translated as “Lord’s day” or “Sabbath day”, pointing to more the Christian/Jewish God.

[Days of the Week Image via Shutterstock] Expand for References