Why We “Drop” the Ball on New Year’s Eve

December 12, 2013 Matt Blitz
Jeremy asks: Why do we drop the ball on New Year’s eve in Times Square? 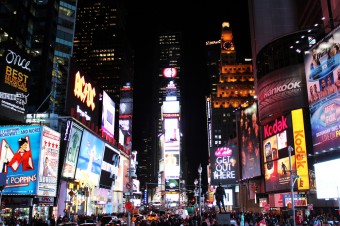 When Adolph Ochs purchased the floundering New York Times in 1896, he made it his mission to make the newspaper the number one paper in all of New York. He started by forming the New York Times Company and made himself the majority owner, ensuring the financial health of the paper. Next, he lowered the price of a daily edition from three cents to one cent. Readership began to ascend. Then, he moved the entire staff into a new shiny building in the middle of Manhattan, to a place called Longacre Square, later renamed Times Square.

But Ochs was a man of fine tastes and big imagination. To celebrate the 1904 New Year and to show off the Times’ new digs, Ochs threw a lavish New Year’s celebration that was to be “the talk of the town.” He hosted an all-day street festival climaxing with a midnight fireworks display from the base of the Times building. Reportedly at midnight “the joyful sound of cheering, rattles and noisemakers from the over 200,000 attendees could be heard from as far away as Croton-on-Hudson, thirty miles north.”  Despite the city later putting a kibosh on the fireworks display, the Times Square New Year’s Eve bash was born.

Even without fireworks, Ochs found a new way New Yorkers could celebrate the incoming new year in style and with glorious light. In 1907, Ochs commissioned the building of an electrically-lit ball to be lowered on the flagpole of the roof of One Times Square (the new name of the newspaper’s building). A “time ball” had been the suggestion of the newspaper’s head electrician, Walter Painer, who had seen one in use on top of the close-by Western Union building.

Time balls had been a favored way of broadcasting the time to sea travelers in the 19th century. The first one was built in 1829 by inventor Robert Wauchope.  These soon became regular features in ports across the world. When the ball began its descent (1 pm in many parts of the world and noon in the US), people would set their clocks to match the ball. By the beginning of the 20th century, with the advent of radio and other more advanced technologies, the time ball became obsolete. In 1907, the time ball, while not completely considered archaic yet, was beginning to become something people just enjoyed watching. 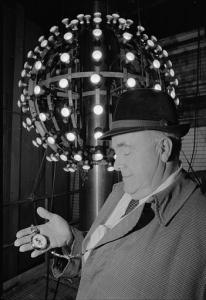 Incandescent light bulbs were a relatively new invention, having just begun being mass-marketed to consumers around the turn of the twentieth century. The newness of this innovation appealed to Adolph Ochs and he fashioned his “New Year’s Eve Ball” with one hundred 25 watt light bulbs. The rest of the ball was made out of iron and wood. Though it was only five feet in diameter, it weighed nearly 700 pounds.  Ochs had a young immigrant metalworker by the name of Jacob Starr, working for the sign company Artkraft Strauss, make the ball. Starr was also given the responsibility of lowering it at the specified time. On New Year’s Eve, 1907, at exactly the stroke of midnight, Starr lowered the ball signifying that it was 1908 and the beginning of a New Year’s tradition.

The ball’s construction over time, in many ways, mimicked the history of industry in the United States. In 1920, they would replace the original ball with one made solely out of iron, showing off the steel strength of America. The ball didn’t drop in 1942 and 1943 -the only time it didn’t drop in the last 110 years- due to wartime light restrictions and industrial production focused on the war efforts.

In 1955, the heavy iron ball was replaced by a much lighter aluminum ball weighing in at a shade over two hundred pounds. Rhinestones, strobe lights, and a computerized lighting system were added in 1995, signifying the age of ubiquitous computers.

The new millennium brought a new ball outfitted with 504 Waterford Crystals, 168 halogen bulbs, and spinning mirrors. The weight of the ball jumped from two hundred pounds to over 1,070 pounds.

Today, the ball is twelve feet in diameter, more than double its original 1907 size. The new ball weighs in at over five metric tons and features  LEDs and computerized lighting patterns. It sits on top of One Times Square year-round for tourists and locals alike to marvel at, but it’s only on one day a year the we actually see the ball drop.