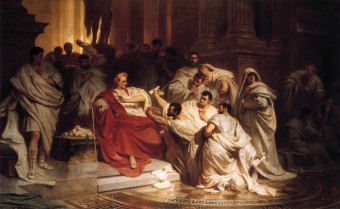 In terms of famous last words, Julius Caesar’s supposed “Et tu, Brute?” may be the most well known of any in history. For context, William Shakespeare would have us believe, Julius Caesar, in his final moments called out: “Et tu, Brute? Then fall Caesar!” to his longtime friend Marcus Junius Brutus, prior to succumbing to stab wounds inflicted by Brutus and co-conspirators in the Senate house.

Shakespeare’s rendition of Caesar’s last words has received popular canonization – entering the vernacular alongside other literary imports from Shakespeare’s The Tragedy of Julius Caesar such as “Beware the Ides of march!”, “Cry havoc, and let slip the dogs of war!”, “Friends, Romans, countrymen lend me your ears!” and “Sic Semper Tyrannis!”

As Caesar professed to love Brutus as a son, and had been Brutus’ political sponsor, “Et tu, Brute?” has become a popular literary trope expressing shock at the betrayal of an ally. Popular reception notwithstanding, however, “Et tu, Brute? Then fall Caesar!” is one Shakespearean exclamation that should provoke historical indignation. According to the Roman Historians Plutarch and Suetonius, the former of whom wrote “Life of Caesar” and “Life of Brutus”, the inspiration for The Tragedy of Julius Caesar, these famous words are a historical fiction.

In roughly 49 BC, Gaius Julius Caesar, then a very popular general of Rome’s armies, emerged the victor from a civil war. Caesar’s victory both removed his chief political and military rival, Gnaeus Pompeius Magnus (defeated by Caesar at the Battle of Pharsalus), and concentrated military power in the hands of Caesar, thereby clearing the path for him to assume dictatorial power. As dictator, Caesar was de jure Chief Executive and Military Commander of Rome, powers which he had already assumed in practice. However, the legal office of dictator also granted Caesar power to rule by decree, and also to wield unilateral judicial power. As a consequence of this, the balance of political power shifted away from Rome’s political elite, the Senate, which had for centuries served as Rome’s premier electoral and administrative body, and entirely towards Caesar.

Unsurprisingly, the Senate took this loss of power and privilege less than lightly. Throughout Caesar’s dictatorship, Caesar had consolidated his political power even further, being declared dictator perpetuo (dictator in perpetuity) and also passed laws that allowed him to personally appoint senators and other officials loyal to him, and to dismiss others at whim. This stoked fears that Caesar wished to completely dismantle the Roman Republic, and instead rule as a king.

To put the gravity of this in perspective, kings ruled Rome prior to the founding of the Republic by Lucius Junius Brutus. Brutus, in roughly 509 BC, summoned the Roman people to vote for the overthrow and exile of the monarchy – an act of rebellion sparked by the rape of a Roman noblewoman, and Brutus’ kin, Lucretia who felt being raped dishonored her family, so killed herself. (Fascinating to think that if not for that rape, much of human history may have been completely changed.)

After the monarchy was successfully deposed, one of Brutus’ first acts was to get the people to swear an oath that never again would a king rule in Rome.

Brutus’ influence was also of more immediate impact on Caesar’s assassination: he was ancestor of Marcus Junius Brutus, the very Brutus to whom Caesar (allegedly) cried to in death. Reportedly, Senator Gaius Cassius Longinus, one of the principal architects of the plot to kill Caesar, attempted to entice Marcus Brutus to participate in the assassination by implying his ancestor would have done the same.

This outlawing of kingship in Rome, in tandem with the personal distress and jealousy of the weakened Roman Senate was the uppermost motive for Caesar’s assassination. Both The Tragedy of Julius Caesar and the historical record make this clear. However at this point, Caesar’s last moments deviate quite a bit from the Shakespearean version.

In Act 3, The Tragedy of Julius Caesar, Shakespeare writes that the conspirators set upon Caesar on the floor of the Senate House. Metellus Cimber initiated the attack, drawing close to Caesar with the pretense of asking Caesar to read a petition. Then the conspirators fall upon him, Casca first, crying “Speak, hands for me!”, Brutus delivering the last (and presumably fatal) blow, and Caesar uttering his famous lines before expiring.

Plutarch and Suetonius would have something to say about this, if they’d been around to read Shakespeare’s account. According to Plutarch, Caesar was not killed in the Senate itself, but rather in the Theater of Pompey, as the main Senate building was being restored at the time, so the Theater was being used as a substitute.  The assassination did, however, occur  on the Ides of March 44BC.

The actual death of Caesar appears to have gone something like this, (from Plutarch’s Caesar):

Casca gave him the first cut, in the neck, which was not mortal nor dangerous, as coming from one who at the beginning of such a bold action was probably very much disturbed. Caesar immediately turned about, and laid his hand upon the dagger and kept hold of it. And both of them at the same time cried out, he that received the blow, in Latin, “Vile Casca, what does this mean?” and he that gave it, in Greek, to his brother, “Brother, help!” Upon this first onset, those who were not privy to the design were astonished and their horror and amazement at what they saw were so great, that they durst not fly nor assist Caesar, nor so much as speak a word. But those who came prepared for the business enclosed him on every side, with their naked daggers in their hands. Which way soever he turned, he met with blows, and saw their swords leveled at his face and eyes, and was encompassed, like a wild beast in the toils, on every side. For it had been agreed they should each of them make a thrust at him, and flesh themselves with his blood; for which reason Brutus also gave him one stab in the groin. Some say that he fought and resisted all the rest, shifting his body to avoid the blows, and calling out for help, but that when he saw Brutus’s dagger drawn, he covered his face with his robe and submitted, letting himself fall, whether it were by chance, or that he was pushed in that direction by his murderers, at the foot of the pedestal on which Pompey’s statue stood, and which was thus wetted with his blood.

Suetonius reports that bystanders claimed Caesar said “Kai su, teknon?” (“You too, child?”) upon witnessing Brutus’ betrayal. Yet despite the reported accounts of bystanders, both Plutarch and Suetonius themselves were of the opinion that Caesar actually said nothing, which perhaps wouldn’t be too surprising considering he was a warrior being attacked.  While in Hollywood and at the theatre this is always a time ripe for long dialogue, in real life, less talk and more action tends to be the best course to improve the odds of staying alive. Further, once one has been stabbed numerous times throughout the body (23 times in this case), making any noise other than a gurgle isn’t perhaps the easiest thing in the world to do.

Shakespeare’s massaging of events can be partially forgiven as he obviously wasn’t attempting to write history, but rather to, in true Shakespearean form, write Caesar’s death in a manner that highlighted the excitement and gravity of the act. Caesar pulling up a toga around his head and dying in silence doesn’t quite draw the same reaction as a jarring “Et tu, Brute?” at the moment the betrayal is fully realized.

It should also be noted that the phrase “Et tu, Brute?” apparently was popularized prior to The Tragedy of Julius Caesar, so the blame for this inaccuracy appears to lie elsewhere. Shakespeare thus aimed for profit and popularity in using a common phrase identified with the event. Given this, one can understand why Shakespeare is a household name, rather than say, Suetonius. “Et tu, Shakespeare? Then fall duller, more accurate, historical accounts.” 😉