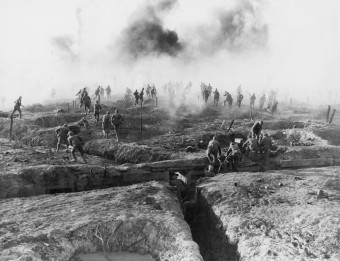 Today I found out how the phrase “basket case” came to mean “someone who is insane.”

At first, “basket case” didn’t mean someone who was crazy. Instead, it referred to someone who had a physical disability.

The phrase has its origins in World War I. Funny enough, one of the earliest known documented instances of the phrase was actually in denial that “basket cases” actually existed, as found in a bulletin issued in March of 1919 on behalf of the United States Surgeon General:

The Surgeon General of the Army… denies…that there is any foundation for the stories that have been circulated…of the existence of basket cases in our hospitals.

But just what was the Surgeon General referring to when he said “basket case”? When this bulletin came out, many newspapers felt the need to define the phrase for their audiences, so apparently the phrase wasn’t widely used at this point. They defined it as “a soldier who has lost both arms and legs and therefore must be carried in a basket.” (The Syracuse Herald, March of 1919)

Whether they were literally carried around in baskets as the newspapers stated or the phrase originally was just referencing the then common colloquial idea of associating baskets with beggars or helplessness, given the grisly nature of the First World War and anecdotal reports, it seems plausible enough that there probably were at least some “basket cases,” despite the Surgeon General’s denial.

As you can imagine, the original meaning of “basket case” was never incredibly common. It wasn’t until World War II that the phrase prominently resurfaced. Near the end of the war in May of 1944, once again, the Surgeon General attempted to deny that there were any basket cases:

…there is nothing to rumors of so-called ‘basket cases’—cases of men with both arms and legs amputated.

After World War II, the original meaning fell out of favor altogether, likely due to the lack of literal basket cases. However, for a while the phrase expanded to mean someone with a physical disability who was unable to get around by themselves easily.

Today, of course, it has further evolved to mostly be a slang phrase for someone with a mental disability, or someone who seems to have been moved to act in a crazy fashion for whatever reason.