Origin of the “Deadline” 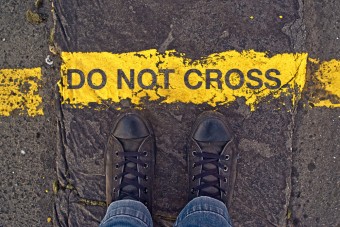 With its roots in 19th century warfare, the phrase “meet a deadline” has an interesting, somewhat literal, etymology.

Most etymologists agree that the word “deadline” first appeared during the American Civil War (1861-1865). According to author Christine Ammer, deadline was coined at the hellish Andersonville, GA prison camp, and first appeared in writing in the report of Confederate Inspector-General, Colonel D.T. Chandler, on July 5, 1864. In describing the horrific conditions, he famously wrote:

The Federal prisoners of war are confined within a stockade 15 feet high, of roughly hewn pine logs, about 8 inches in diameter, inserted 5 feet into the ground, enclosing, including the recent extension, an area of 540 by 260 yards. A railing around the inside of the stockade, and about 20 feet from it, constitutes the “deadline,” beyond which the prisoners are not allowed to pass . . . [as a large portion is] at present unfit for occupation . . . [this] gives somewhat less than 6 square feet to each prisoner . . .

David A. Kelly Jr., an associate professor at the Naval War College, points to an even earlier writing of the term in an inspection report on Andersonville from Confederate Captain Walter Bowie on May 10, 1864:

On the inside of the stockade and twenty feet from it there is a dead-line established, over which no prisoner is allowed to go, day or night, under penalty of being shot.

Kelly goes on to opine that the term was likely more universal and used in many prisons, as it was included in official reports regarding several camps, including the Union prison at Rock Island, IL:

When I first saw him he was lying right by the end of the coal house. Then I went to the far end of my beat and turned round and missed him then, and I looked back and I saw him slipping across the ditch; then, which I got close enough to the man to be certain, I slipped off my shoes and crept right up over him and stepped right up on the rail and fired at him while he was scratching under the fence . . . . Way up at the far end of the Barrack No. 13, pretty close to the ditch and near the dead line.

The Online Etymology Dictionary agrees that the term arose during the American Civil War, citing an October 31, 1865 Report of the Secretary of War that was introduced in the Trial of Henry Wirz (the prison keeper at Andersonville):

And he, the said Wirz, still wickedly pursuing his evil purpose, did establish and cause to be designated within the prison enclosures containing said prisoners a “dead line,” being a line around the inner face of the stockade or wall enclosing said prison and about twenty feet distant from and within said stockade; and so established said dead line, which was in many places an imaginary line, in many other places marked by insecure and shifting strips of [boards nailed] upon the tops of small and insecure stakes or posts, he, the said Wirz, instructed the prison guard stationed around the top of said stockade to fire upon and kill any of the prisoners aforesaid who might touch, fall upon, pass over or under [or] across said “dead line” . . .

Deadline in Other Settings

Commentator David Merline has written that, “in the early 19th century, the word was used to describe a line on printing presses, beyond which text would not print properly,” and Chip Hutcheson agrees, noting that:

Another variation, this one using the hyphenated “dead-line,” was used by printers – not to refer to the time to go to press, but to describe how the press should be configured. It was common to talk about the type “not coming outside of the dead-line on the press.

Certainly by the early 1900s, the word was being used to describe any line that shouldn’t be crossed, not just one where the offender would be shot. In the 1909 short story, The Enchanted Profile, O. Henry used it in the context of social propriety:

She had unfailing kindliness and good nature; and not even a whitelead drummer or fur importer had ever dared to cross the dead line of good behavior in her presence.

Shortly thereafter, by 1920, deadline was being used as a synonym for “time limit,” and primarily associated with newspaper jargon. There is a common, if vague and unsatisfying, explanation of how this came to be:

But it was the newspaper business that made dead-line more than just a historical curiosity. To have the latest news and still get a newspaper printed and distributed on time requires strict time limits for those who write it. . .

America in So Many Words: Words That Have Shaped America

‘Deadline’ Origin Not Linked to Time

Don’t Be An Idiom: Meet a Deadline

The Tragedy of Andersonville: Trial of Captain Henry Wirz, the Prison Keeper

The War of the Rebellion: a Compilation of the Official Records of the Union and Confederate Armies: Series 2, Volume 7