Where the Word Meme Comes From 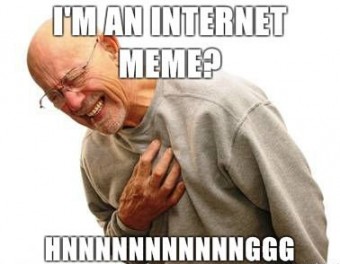 Today I found out where the word meme comes from.

In its early days, “meme”, which incidentally is often mispronounced as “me-me” or “meh-meh”, but in fact should be pronounced “meem”, primarily was only known and used by certain academics, but today this neologism is beginning to reach widespread use thanks to describing the viral spread of jokes, ideas, etc. via the internet.

“Meme” was coined by the often controversial evolutionary biologist Richard Dawkins in his 1976 book, The Selfish Gene.  In it, he states the following:

We need a name for the new replicator, a noun that conveys the idea of a unit of cultural transmission, or a unit of imitation. ‘Mimeme’ comes from a suitable Greek root, but I want a monosyllable that sounds a bit like ‘gene’. I hope my classicist friends will forgive me if I abbreviate mimeme to meme. If it is any consolation, it could alternatively be thought of as being related to ‘memory’, or to the French word même. It should be pronounced to rhyme with ‘cream’.

As stated, Dawkins was hoping that the word would be used as a unit of human cultural transmission, such as a melody, fashion, or catch-phrase, with the idea evolving as it spreads and time passes.  This evolution is primarily spurred by the fact that people refine the memes or simply don’t “copy” the information exactly when they transmit it to another human.  This has since given rise to other derivative words or phrases including: