The Origin of 7 Common Phrases 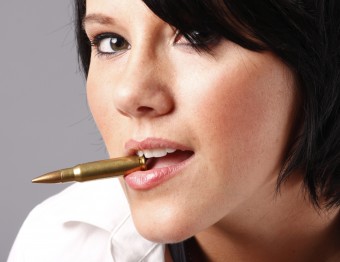 1) Origin of “Bite the Bullet”:  This phrase was first attested in the late 18th century in the military.  At the time, it was a common practice during emergency, battlefield surgeries to have the person being operated on bite down on a lead bullet to help distract them from the pain of surgery without anesthesia, as well as to cut down on the screaming.  In the late 19th century, this spread to the phrase being used in a figurative sense of “biting the bullet” when you are about to do something unpleasant.

2) Origin of “Blood is Thicker Than Water”: This is one that’s completely flipped its meaning over the centuries.  In the beginning, it meant something to the effect of “a bond or covenant I’ve made with someone I’ve shed or shared blood with (sometimes literally) is stronger than one I have with someone I’ve shared the womb with.”  Obviously today it’s interpreted the other way, that the bond between family members or blood relations is stronger than one between people only connected by water.

The phrase is thought to have its origins either in blood rituals made between people, forming a bond or covenant with one another by shedding blood, or between soldiers who fought and whether literally or figuratively shed blood together on the battlefield.

The first instance of something like this phrase popped up in 1180 in Reynard the Fox by Heinrich der Glîchezære: “Kin-blood is not spoilt by water.”  It later appeared in its more modern form “blood is thicker than water” in John Ray’s 1670 work “Proverbs” and then in Sir Walter Scott’s novel Guy Mannering in 1815, with Scott generally being credited as the one who “invented” the exact phrase, though in truth the sentiment was borrowed from older proverbs.

3) Origin of Caught Red Handed:  This expression has its origins in Scotland around the 15th century.  Given the context it was often used in the earliest references, the phrase “red hand” or “redhand” probably came about referring to people caught with blood on their hands.

The first known documented instance of “red hand” is in the Scottish Acts of Parliament of James I, written in 1432:

It subsequently popped up numerous times in various legal proceedings in Scotland, nearly always referring to someone caught in the act of committing some crime, such as “apprehended redhand”, “taken with redhand”, etc.

The first documented instance of the expression morphing from “red hand” to “red handed” was in the early 19th century work Ivanhoe, written by Sir Walter Scott:

I did but tie one fellow, who was taken redhanded and in the fact, to the horns of a wild stag.

Its use in Ivanhoe subsequently helped popularized it throughout the English speaking world.

It further morphed to the full “caught red handed” phrase about a half a century after Ivanhoe was published, first appearing in Guy Livingstone written by George Alfred Lawrence and published in 1857:

My companion picked up the object; and we had just time to make out that it was a bell-handle and name-plate, when the pursuers came up – six or seven “peelers” and specials, with a ruck of men and boys. We were collared on the instant. The fact of the property being found in our possession constituted a ‘flagrans delictum’ – we were caught red-handed.

4) Origin of “Breaking the Ice”: Originally this phrase literally meant to break ice, as in ice breaker ships that would “forge a path” for other ships to follow.  Around the late 17th century, this took on the more modern meaning of “forging a path”, not through ice, but through an awkward silence or awkward social situation.  Not long after “breaking the ice” popped up, the figurative meaning of the term “ice-breaker” also became common- a mechanism to break up socially awkward situations and get people talking.

5) Origin of “Eat Humble Pie”:  This one originally came about thanks to “humble” sounding similar to “umble” (indeed, the “h” sound is and was often dropped in many dialects, so they sound exactly the same in those cases).  An “umble pie” was literally a pie cooked with umbles in it.  What are “umbles”?  Not a common word anymore, but used to just mean the chopped or ground up innards of an animal, like the heart, lungs, kidneys, intestines, etc., most commonly associated with the innards of a deer.

How did we then go from the literal “umble pie” to the figurative “humble pie”?  It’s thought it probably had to do with the fact that many who ate “umble pie”, made of the random innards of animals all mixed in, not unlike a hotdog,  tended to be of lower station, or a more humble position in life from a wealth and status standpoint-  thus the connection from “umble pie” to “humble pie”.

Around the 18th century, about a century after the first documented instance of the phrase “umble pie”, the phrase “humble pie” popped up and within another century this had spread to meaning someone who was having to “eat his words”, usually in a humiliating way, and later spread to meaning not just “eating one’s words” but any humiliating scenario someone is put into because of something they did or said.

6) Origin of Jaywalking: “Jaywalking” comes from the fact that “Jay” used to be a generic term for someone who was an idiot, dull, rube, unsophisticated, poor, or simpleton.  More precisely, it was once a common term for “country bumpkins” or “hicks”, usually seen incorrectly as inherently stupid by “city” folk.

The first documented use of the word “jaywalking” was from a 1909 Chicago Tribune where it stated, “Chauffeurs assert with some bitterness that their ‘joyriding’ would harm nobody if there were not so much jaywalking.”

7) Origin of Show Your True Colors: Ships would often carry flags from many nations so that they could deceive nearby vessels into thinking they were allies.  The rules of engagement however required that all ships hoist their true nation’s colors before firing upon someone.  Thus, it was common to hoist an enemy ship’s colors and hail them; once near, show your true colors and fire upon them.