The Origin of the Phrase “In the Limelight” 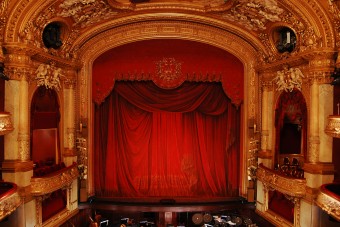 Today I found out about the origin of the phrase “in the limelight.”

“Limelight,” which is also known as “calcium light,” was used as stage lighting for years after being discovered by Goldsworth Gurney in the 1820s. Gurney was employed by the Surrey Institute as a lecturer in chemistry and philosophy. On the side, he did a bit of experimenting of his own. He invented an “oxy-hydrogen blowpipe,” which works by introducing a jet of oxygen and hydrogen to a flame, making it extremely hot. He found that introducing a small chunk of lime (the stone, not the fruit) to the flame resulted in a blinding white light that could be visible for miles.

It was after this that Thomas Drummond, who is often credited with inventing the light (so much so that it’s sometimes called “Drummond Light”), saw a demonstration by Michael Faraday and thought that the bright light would be useful in surveying. At the time, it’s thought he was doing a surveying project measuring the peaks of Ireland’s mountains. However, given the often dreary weather, it was difficult to see the peaks at times. Instead, a limelight would be lit at the top. Drummond reported that he could see the light from as far away as 68 miles, which helped the surveying process go much more smoothly.

In these days before electricity, a bright white light was something many people wanted to get their hands on. It was particularly alluring to the theatre. Limelight was first used in a public theatre in 1837, where the technology was employed at Covent Garden in London. By the 1860s, the use of limelights in theatres was widespread. Before this, theatres were typically lit by gas lights which were particularly dim; to make up for it, hundreds of gaslights were used to light a theatre. As you can probably imagine, this resulted in a huge fire risk.

With its bright white light, it took far fewer “limelights” to light the stage, reducing the fire risk. Limelights were typically used for lighting the “front and centre” of the stage as well as simulating sunlight and moonlight. One of the drawbacks of using limelights was that someone had to tend to them at all times, adjusting the block of limestone and checking the oxygen and hydrogen cylinders fueling the flames.

By the end of the 19th century, electric lights were starting to be used and limelight fell out of favour. However, it’s easy to see how the expression came about: limelight was used at the front and centre of the stage, meaning a person standing in the limelight would be the centre of attention. Despite theatres moving to electric lights, “limelight” remained the way to describe someone who was front and centre. (You can see current words and phrases outlasting their “real” use even today—for instance, when was the last time you actually “hung up” a phone?  Soon, I imagine physically “rolling up” a window will also go the way of the Dodo, yet we’ll still likely use the phrase for many decades to come.)

As for the first time the word was used in the way we use it today, rather than in the literal lighting sense, that can be traced to a 1902 article in the New York Times:

William S. Devery was in the limelight last evening. Tens of thousands of people of the district crowded the streets in the neighborhood and shouted the name of the ex-Chief of Police of New York.