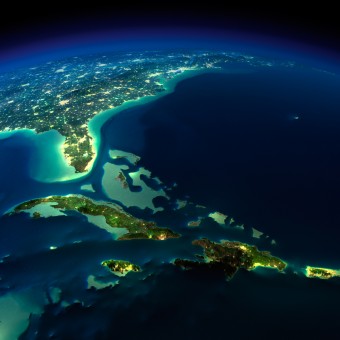 The Bermuda Triangle is a large area of ocean between Florida, Puerto Rico, and Bermuda. Over the last few centuries, it’s thought that dozens of ships and planes have disappeared under mysterious circumstances in the area, earning it the nickname “The Devil’s Triangle.” People have even gone so far as to speculate that it’s an area of extra-terrestrial activity or that there is some bizarre natural scientific cause for the region to be hazardous; but most likely, it’s simply an area in which people have experienced a lot of bad luck—the idea of it being a “vortex of doom” is no more real than Bigfoot or the Loch Ness Monster (see The Origin of the Bigfoot Legend and The Origin of the Loch Ness Monster).

The Bermuda Triangle’s bad reputation started with Christopher Columbus. According to his log, on October 8, 1492, Columbus looked down at his compass and noticed that it was giving weird readings. He didn’t alert his crew at first, because having a compass that didn’t point to magnetic north may have sent the already on edge crew into a panic. This was probably a good decision considering three days later when Columbus simply spotted a strange light, the crew threatened to return to Spain.

This and other reported compass issues in the region gave rise to the myth that compasses will all be off in the Triangle, which isn’t correct, or at least is an exaggeration of what is actually happening as you’ll see.  Despite this, in 1970 the U.S. Coast Guard, attempting to explain the reasons for disappearances in the Triangle, stated:

First, the “Devil’s Triangle” is one of the two places on earth that a magnetic compass does point towards true north. Normally it points toward magnetic north. The difference between the two is known as compass variation. The amount of variation changes by as much as 20 degrees as one circumnavigates the earth. If this compass variation or error is not compensated for, a navigator could find himself far off course and in deep trouble.

Of course, despite this now being repeated as an explanation for disappearances in the Triangle on numerous documentaries and articles since then, it turns out magnetic variation is something ship captains (and other explorers) have known about and had to deal with pretty much as long as there have been ships and compasses. Dealing with magnetic declination is really just “Navigation by Compass” 101 and nothing to be concerned about, nor anything that would seriously throw off any experienced navigator.

In 2005, the Coast Guard revisited the issue after a TV producer in London inquired about it for a program he was working on.  In this case, they correctly changed their tune about the magnetic field bit stating,

Many explanations have cited unusual magnetic properties within the boundaries of the Triangle. Although the world’s magnetic fields are in constant flux, the “Bermuda Triangle” has remained relatively undisturbed.  It is true that some exceptional magnetic values have been reported within the Triangle, but none to make the Triangle more unusual than any other place on Earth.

The modern Bermuda Triangle legend didn’t get started until 1950 when an article written by Edward Van Winkle Jones was published by the Associated Press. Jones reported several incidences of disappearing ships and planes in the Bermuda Triangle, including five US Navy torpedo bombers that vanished on December 5, 1945, and the commercial airliners “Star Tiger” and “Star Ariel” which disappeared on January 30, 1948 and January 17, 1949 respectively. All told, about 135 individuals were unaccounted for, and they all went missing around the Bermuda Triangle. As Jones said, “they were swallowed without a trace.”

It was a 1955 book, The Case for the UFO, by M. K. Jessup that started pointing fingers at alien life forms. After all, no bodies or wreckage had yet been discovered. By 1964, Vincent H. Gaddis—who coined the term “Bermuda Triangle”—wrote an article saying over 1000 lives had been claimed by the area. He also agreed that it was a “pattern of strange events.” The Bermuda Triangle obsession hit its peak in the early 1970s with the publication of several paperback books about the topic, including the bestseller by Charles Berlitz, The Bermuda Triangle.

However, critic Larry Kusche, who published The Bermuda Triangle Mystery: Solved in 1975, argued that other authors had exaggerated their numbers and hadn’t done any proper research. They presented some disappearance cases as “mysteries” when they weren’t mysteries at all, and some reported cases hadn’t even happened within the Bermuda Triangle.

After extensively researching the issue, Kusche concluded that the number of disappearances that occurred within the Bermuda Triangle wasn’t actually greater than in any other similarly trafficked area of the ocean, and that other writers presented misinformation—such as not reporting storms that occurred on the same day as disappearances, and sometimes even making it seem as though the conditions had been calm for the purposes of creating a sensational story. In short: previous Bermuda Triangle authors didn’t do their research and either knowingly or unintentionally “made it up.”

The book did such a thorough job of debunking the myth that it effectively ended most of the Bermuda Triangle hype. When authors like Berlitz and others were unable to refute Kusche’s findings, even the most steadfast of believers had difficulty remaining confident in the sensationalized Bermuda Triangle narrative. Nevertheless, many magazine articles, TV shows, and movies have continued to feature the Bermuda Triangle.

Because the number of disappearances in the Bermuda Triangle is no greater than any other similarly trafficked area of the world’s oceans, they don’t really need an explanation. But if you’re still convinced that the Triangle is a ship graveyard, relative to other regions that get around the same number of travelers, here are some natural explanations from the Coast Guard to combat some of the “alien” and other fantastical theories.

The majority of disappearances can be attributed to the area’s unique features. The Gulf Stream, a warm ocean current flowing from the Gulf of Mexico around the Florida Straits northeastward toward Europe, is extremely swift and turbulent. It can quickly erase any evidence of a disaster.

The unpredictable Caribbean-Atlantic storms that give birth to waves of great size as well as waterspouts often spell disaster for pilots and mariners. (Not to mention that the area is in “hurricane alley.”) The topography of the ocean floor varies from extensive shoals to some of the deepest marine trenches in the world. With the interaction of strong currents over reefs, the topography is in a constant state of flux and breeds development of new navigational hazards.

Not to be underestimated is the human factor. A large number of pleasure boats travel the water between Florida’s Gold Coast (the most densely populated area in the world) and the Bahamas. All to often, crossings are attempted with too small a boat, insufficient knowledge of the area’s hazards and lack of good seamanship.