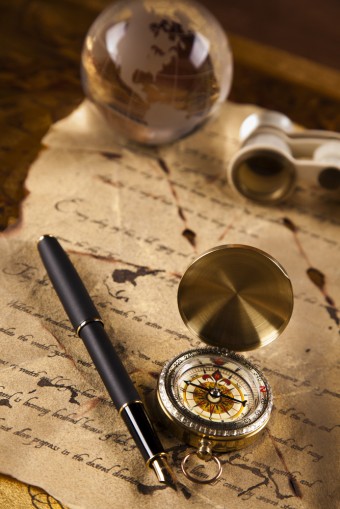 In 1492, Columbus sailed the ocean blue… with a whole lot of maps and information about the very round Earth. Contrary to popular belief, not only did Columbus realize the world was round, so did his contemporaries. In fact, it was so well accepted that daring seafarers had been exploring the Atlantic for hundreds of years before Columbus’ time. Without a doubt, men of the early Renaissance knew the world was round, and that the Nina, the Pinta and the Santa Maria were in no danger of sailing over the edge.

The ancients were well aware the world was a sphere. Pythagoras (6th century B.C.) is generally credited with having first suggested a round Earth. Aristotle (4th century B.C.) agreed and supported the theory with observations such as that the southern constellations rise higher in the sky when a person travels south. He also noted that during a lunar eclipse, the Earth’s shadow is round.  Eratosthenes (3rd century B.C., head librarian at the Library of Alexandria) built on their ideas and calculated the circumference of the Earth with remarkable accuracy at about 252,000 stadia.  Depending on which stadion measurement he was using, his figure was either just 1% too small or 16% too large; many scholars think it likely that he was using the Egyptian stadion (157.5 m), being in Egypt at the time, which would make his estimate about 1% to small… remarkable.

Later, the Roman Ptolemy added to the collected wisdom. He observed that as a man approached a far off mountain, it appeared to grow out of the ground – a clear indication of a curved surface. He later devised the forerunner of modern-day longitude and latitude, including measuring what we now call latitude from the equator.

In Christian medieval Europe, Bede (7th century C.E.), a scholar and a Catholic monk, produced an influential treatise that included a discussion of the spherical nature of the world. This work, The Reckoning of Time, was copied and distributed to clerics across the Carolingian empire. Later, in the 1300s, Dante Alighieri’s Divine Comedy also describes the Earth as a sphere.

The Catholics weren’t the only religious sect that thought the world was round.  The Islamic world is known to have consistently maintained the scientific knowledge of the Greeks and Romans, preserving the works of Aristotle and Ptolemy, among others. They were well aware the Earth was round, having calculated with relatively good precision its circumference in the early 9th century.

With extraordinary few exceptions, no educated person in the history of Western Civilization from the third century B.C. onward believed that the Earth was flat.

The debate since then among the educated, both religious and secular, was not whether the Earth was approximately a sphere, but exactly what the size of the Earth was.

The idea of sailing west to reach India also has its origins in antiquity, with the first known person to mention the notion being the Roman writer Strabo in the 1st century BC, who stated:

If of the more recent measurements of the Earth, the one which makes the Earth smallest in circumference be introduced–I mean that of Posidonius who estimates its circumference at about 180,000 stadia, then. . . if you sail from the west in a straight course, you will reach India within 70,000 stadia. “

Beyond the educated, even the most empty headed sailor knew the Earth was round simply by the fact that ships and the like disappeared over the horizon with the bottom first and then the mast the last to be sighted.  A similar effect is observed when spotting land from a ship.  Again, what was the real mystery at this time was the actual circumference of the Earth.  Most- correctly -thought Eratosthenes’ estimate was probably reasonably accurate, meaning that if one did not encounter a well stocked land mass in between Spain and Asian to resupply, Columbus’ expedition would end in failure with the crew dying of thirst or starvation.

In fact, this would have happened if not for Columbus encountering the Caribbean islands around where he expected to encounter his destination.  Columbus, of course, felt that the Earth was much smaller than Eratosthenes’ estimate, so the journey was doable at Columbus’ estimation of only about 3100 miles (5000 km) to Japan, rather than the true 12,400 miles (20,000 km) it is.  Queen Isabella eventually sided with Columbus and agreed to finance the expedition, despite the objections of scholars who were consulted over the plan.

As to how the myth that people during Medieval times thought the Earth was flat came about, this is up for debate.  The idea seems to have first popped up in the 17th century and appears to have been, at least in part, put forth by secular scientists railing against the ignorance and misguided notions of religious groups (specifically Catholics), who they claimed in Medieval times believed the world was flat- ironically, despite the lack of much evidence supporting that claim, and the numerous documented instances of religious scholars from that era stating the Earth is round.  The myth gained significant traction in the 19th century with various works, such as Andrew Dickson White’s History of the Warfare of Science with Theology.

The “Columbus / Flat Earth Myth” itself was widely popularized in Washington Irving’s The Life and Voyages of Christopher Columbus, which was in numerous places largely fiction, though presented as fact and a scholarly work.   In his account, Irving claimed that it was Columbus’ voyage that proved to the world that the Earth was round, going so far as to explicitly state that one of the objections to Columbus’ voyage was that a round Earth wasn’t scriptural, so the voyage was doomed to fail when Columbus encountered the edge of the world.  In fact, there is no first hand record of any such objection to Columbus’ expedition, with the primary documented objections having to do with the length of the journey.  Irving’s fanciful tale is simply in line with the “Warfare of Science with Theology” viewpoint, which at least in terms of the “flat Earth vs. spherical Earth” issue, historically wasn’t ever a sticking point as has been so often claimed from the 17th century on (though around the 1920s, most scholars stopped believing this myth).

One of the only significant Christian works that seems to put forth the notion of a flat Earth was written by an Egyptian Monk in the 6th century AD, Christian Topography. On the whole, though, evidence seems to indicate this work wasn’t very influential, as you might expect given that most educated Christians were well aware of the mountain of evidence that the world was a sphere.  That being said, Christian Topography was often cited as support for the notion that Christians thought the world was flat until recently, with those authors casually ignoring all evidence to the contrary.

Another common myth surrounding Columbus’ voyage was that he was the first to discover the “New World”.   In fact, there is no question that North America was visited by Northern Europeans in the 10th or 11th centuries.  Specifically, Norse settlements, one of which has since been excavated, were established in continental North America in the 10th century.  The settlements were a failure in part, it appears, due to problems with the Native Americans, who the Norse called Skrælings. However, according to recent scholarship, the Norsemen continued to meet and trade with indigenous Americans, at least sporadically, even after the failure of the two colonies they setup.  Not the dull oafs of legend and Capital One commercials, the Vikings apparently made a map of their North American conquests. The Vineland map is believed by some to have been made circa 1440, and demonstrates that at least some Europeans were aware of the existence of continental North America, well before Columbus set sail.

Today, there is also increasing evidence, and speculation, that the Americas were visited by Muslim and Chinese explorers long before the “Age of Discovery” in the late 15th and 16th centuries.  Although still somewhat up for debate, there is evidence that a Muslim sailor, Khashkhash Ibn Saeed Ibn Aswad, traversed the Atlantic and landed in the New World in 889 C.E. In 956, famed Islamic historian, Abul Hasan Ali Ibn Al Masudi, created a map from his research of this journey that depicts an unknown landmass where America is located. Other voyages to the New World chronicled in Muslim histories includes that of Ibn Farrukh, who seems to have visited islands far to the west of the Canaries in 999 C.E.

Proponents of the Muslim exploration theory repeatedly turn to an intriguing map drawn in the early 16th century by the famous cartographer, Piri Reis. Reportedly copying from ancient documents found in a Turkish library, it is widely accepted that Reis created the map in 1513.  Even though this is after Columbus “discovered” the New World, the Piri Reis map depicts the accurate placement of islands and landmasses far before they were visited and mapped by Europeans. In fact, it shows the Andes Mountain range, which was not “discovered” by Pizarro until 1527.


[Image via Shutterstock] Expand for References