The Origin of the Bigfoot Legend 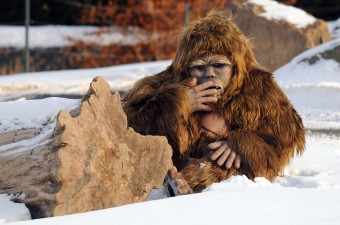 Today I found out the origin of the Bigfoot legend.

Stories of a giant, hairy creature that appears half man and half ape have existed in various parts of the world for many centuries. In fact, the only continent not to have stories of “wild men” is Antarctica. In the Himalayas, it’s the Yeti. In Canada, it’s the Sasquatch. And in the northwest United States, it’s Bigfoot. Bigfoot is described by believers as being between six and eight feet tall with a large forehead and pronounced brow, like a cave man’s, and a rounded, crested head like a gorilla’s. He is covered in brown or red hair and has enormous feet that are his namesake, with the biggest estimation at a whopping two feet long by eight inches wide. Some “witnesses” claim that the five-toed Bigfoot prints they saw on the ground were accompanied by claw marks (not unlike a five-toed, clawed paw print of a bear—but rational explanations aren’t as fun).

Stories of a “wild man” existed among the Native Americans of the Pacific Northwest long before white colonists moved in. Versions of Bigfoot ranged from harmless giants who stole fish from fishermen’s nets, to cannibalistic monsters living on mountain peaks. These stories varied from tribe to tribe, and even from family to family, which meant that Bigfoot had a lot of different names. In the 1920s, J.W. Burns compiled the local legends for a series for a Canadian newspaper, coining the term “Sasquatch” in the process.

It wasn’t until 1958 that the Bigfoot legend really started to kick off in the United States. That year, a man named Gerald Crew found a set of large footprints at a construction site where he worked in California. He had his friend make plaster casts of the prints. The story gained a lot of attention after being published in the Humboldt Times, and was picked up by the Associated Press, drawing international attention.

Turns out, the footprints were a hoax (surprise, surprise). After the death of a man named Ray Wallace—the brother of the man in charge of the construction site where the prints were found—his family stepped forward to say that he was responsible for faking the prints. Scoop Beal, the editor of the Humboldt Times, is also said to have been involved. Nevertheless, the 1958 prints find brought the first “Bigfoot Hunters” to the area.

In 1967, the “Patterson-Gimlin film” was captured. The film shows a tall, hairy “Bigfoot” walking through the forest. Believers in Big Foot note the creature’s inhuman way of walking is a major point toward the film being real. Patterson also claimed to have taken the film to a group of people working in the special effects department at Universal Studios who supposedly said,

However, a number of factors lead to skeptics believing it’s a hoax: people who knew Patterson have described him, frankly, as a liar; Patterson’s version of events—including an estimate of how tall “Bigfoot” was— also changed and escalated over time.  More to the point, a man named Bob Heironimus claimed to have worn the Bigfoot costume for the making of the film. Most likely, and not too surprisingly, the film was a hoax.

The most common explanation for Bigfoot sightings is that people are playing pranks. There was even once a thriving market for “Bigfoot feet” to create your own prints to trick your family and friends. People still even dress up in ape costumes and ghillie suits in order to perpetuate the legend.

Some sightings are also simply misidentified animals. In 2007, a photo was snapped in Pennsylvania using an automatically triggered camera hanging from a tree. While believers claimed the blurry photo—showing a large, hairy creature standing on all-fours—was that of a “juvenile sasquatch,” the Pennsylvania Game Commission said the creature was most likely “a bear with an extreme case of mange.”  Looking at the picture, it could also just as easily been a human in a suit.

One of the big questions posed to believers in Bigfoot is if there are enough of the creatures to maintain a stable breeding population, and over a reasonably large area given all the supposed sightings—which there must be, unless they have extraordinarily lengthy lives—then why has a body of Bigfoot never been found? In 2008, Rick Dyer and Matthew Whitton claimed to have solved this problem after they supposedly found a Bigfoot body, posting a video of it on YouTube. The body was nearly eight feet tall and weighed over 500 pounds. Despite even some Bigfoot experts doubting the young men’s story, the discovery was covered by CNN, ABC, Fox, and BBC News, and the pair received $50,000 from Searching for Bigfoot, Inc. as “a measure of good faith.” However, when the body arrived in a block of ice and was thawed and examined, researchers found that the “body” was made up of rubber feet, fake hair, and a hollow head. Not exactly convincing. Dyer and Whitton later admitted that it was a hoax. (shocker)

While the idea of a real Bigfoot is pretty unconvincing, the stories have caught on and are so prevalent in pop culture that it’s unlikely the idea of Bigfoot will fade away any time soon. As with everything, treat the stories and information you hear or read with a healthy dash of skepticism. Someday real, solid proof of Bigfoot might emerge, but I’m not holding my breath.