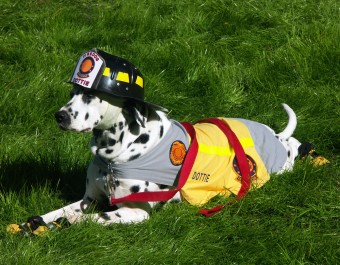 Today I found out why Dalmatians are commonly firehouse dogs.

Dalmatians as firehouse dogs have become so common in books and movies that it’s practically a stereotype. It turns out that Dalmatians actually really do have a strong history in the firehouse, and they used to have some purpose, too.

Before fire trucks, there were horse-drawn carriages. One of the most effective fire-fighting tools in the middle of the 18th century was the steam pumper- a machine that consisted of a boiler which was able to use steam to force water out of hoses and onto a fire. The fire brigade’s horse-drawn carriages would be loaded up with the machine, the horses would be hitched up, and the vehicle would tear off down the road.

When fire fighters were racing off to fight the flames, they didn’t have time for the horses to spook nor to slow down for all the pedestrians using the road, which is where the Dalmatians came in.

Besides being known for forming strong bonds with horses, in the early 1700s, it was observed that Dalmatians were perfectly suited for travelling long distances.  As stated by the Dalmatian Club of America, the English felt that Dalmatians had the “strength, vitality, fortitude and size to keep running along under the carriage for hundreds of miles.”

When the travellers rested for the night, the dogs were also useful for standing guard over the horses and the people’s belongings. English aristocrats soon picked up on the practice of having Dalmatians follow their carriages and the dogs even became something of a symbol of social status- the more Dalmatians that ran alongside your carriage, the wealthier you must be.

Back to Dalmatians and the horse-drawn fire carriages- because of the dogs’ strong work ethic and stamina, they typically didn’t have any trouble keeping up with the carriages even when they were flying down the roads at high speeds. The Dalmatian would scare away anything that might spook the horses, and also just as importantly served as the first “siren.” Its bark would alert pedestrians on the road that the fire brigade was on its way, and to move off the street.

The horses were also a bit leery of being so close to burning buildings when it came time to stop. (Can you blame them?) While the firemen unloaded their equipment and rushed off to put the fire out, their trusty Dalmatians would stay with the cart, keeping the horses calm and guarding the firemen’s belongings. Not only that, but once they were back at the fire house, the Dalmatian were often trained to sniff out and kill rats and other vermin—kind of like having a barking cat that was far less lazy than a meowing mouse-catcher.

When the much more efficient motorized fire trucks were created, there were no longer horses for Dalmatians to keep company and no need for them to run ahead of the trucks to alert people that the fire brigade was coming—there were sirens for that now. Their usefulness spent, Dalmatians might have vanished from fire stations altogether. Instead, they turned into fire station mascots, particularly popular when firefighters go around teaching kids about fire safety.  Of course, at this point any dog could be used, and sometimes that’s the case, but given the long standing tradition of using Dalmatians, it seems likely they will remain the dog of choice at many fire stations for the foreseeable future.