The Fascinating Early History of Salt 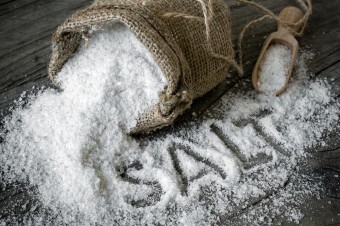 There are a lot of different salts (like potassium nitrate for gunpowder and sodium bicarbonate for baking) but only one that truly meets our dietary needs and satisfies our craving for that salty taste – sodium chloride (NaCl). Containing two elements necessary for our survival, its cultivation goes back thousands of years to the birth of civilization.

The human body needs sodium and chloride for respiration and digestion and without it, we “would be unable to transport nutrients or oxygen, transmit nerve impulses or move muscles, including the heart.”[i]

In the wild, herbivores seek out salt licks. When humans ate primarily wild game, we ingested sufficient salt to meet our dietary needs; however, as our diet changed to mostly cultivated crops (read vegetables and grains), we needed to supplement salt.

As a rare yet necessary commodity, over the ages, it has taken on a supernatural aspect:

In Judaism . . . salt . . . keeps the agreement between God and his people [and] . . . in both Islam and Judaism, salt seals a bargain. . . . Indian troops pledged their loyalty to the British with salt. Ancient Egyptians, Greeks, and Romans included salt in sacrifices and offerings . . . .In traditional Japanese theater, salt was sprinkled on the stage to protect the actors from evil spirits. In Haiti, the only way to . . . bring a zombie back to life is with salt . . . .[ii]

Human cultivation of salt is ancient, and the earliest known salt harvesting is believed to have occurred at Lake Yuncheng, in the Chinese province of Shanxi around 6000 BC. Although salt surely must have been used in a variety of ways, one of the most popular, salting fish to preserve it, appears in the records of the Xia Dynasty by about 2000 B.C.[iii] By 500 BC, the happy consequence of preserving soybeans in salt, a savory liquid that later became known as soy sauce, was discovered.

Ancient Egyptians also prized the compound, and salted fish and birds have been found in tombs of the wealthy that were sealed over four thousand years ago. Back then in the Old Kingdom, salt was harvested from lakebeds via a process sometimes referred to as “dragging and gathering.” These saltworks were known in Arabic as sebkha.[iv]

In common use in Egypt, salt was mixed with water and vinegar into a sauce known as oxalme, and (separately) combined with fish and fish parts into a condiment similar to today’s fish sauce.  Served with a variety of dishes, one ancient epicure wrote “there is no better food than salted vegetables.”[v]

Egyptian mummies were preserved in a practice “remarkably similar” to that used for curing fish and birds where “the body is placed in natron [known as the divine salt], covered entirely over for seventy days – never longer.” Ironically, during the looting of tombs from Thebes and Saqqara in the 19th century AD, authorities taxed the mummies as if they were salted fish.[vi]

Written records describe the production and trade of sea salt in China, as well, and date to 1800 BC. The Chinese process involved “putting ocean water in clay vessels and boiling it until reduced to pots of salt crystals.” By 450 BC, innovator Yi Dun was boiling brine (salty water) in iron pans to distill salt and by 252 BC, Li Bing had ordered the drilling of the first brine wells. Natural gas, a by-product of these brine wells, was used to heat the pans and distill the salt by about 200 AD.[viii]

Rome, like other Italian cities, was purposely built near a saltworks that was situated at the mouth of the Tiber River. When the Romans moved their saltworks further away, they also built their first great road, the Via Salaria (or Salt Road)[ix]

From as early as the 6th century BC, Rome’s political leaders were controlling the trade of salt. A popular way of mollifying the masses, the price of salt was often kept artificially low, particularly during times when the republic (or the empire) needed popular support.[x] During the Punic Wars (264-146 BC), however, a high tax was placed on salt and used to fund military campaigns. Indexed according to the purchaser’s distance from a mine, the tax scheme was devised by a man given the title of (I kid you not) the Saltinator.[xi]

By the 1st century BC in China, salt had become such a hot commodity that China’s leaders were also controlling its trade. So important was salt to the Chinese economy that in 81 BC, Emperor Zhaodi convened a council to discuss its monopoly (along with the one on iron); the resulting debate is recorded in the famous Discourse on Salt and Iron. During the Tang dynasty in the 1st century AD, “half of the revenue of the Chinese state was derived from salt.”[xii]

In Northern Europe, salt was being harvested as early as 400 BC in mines outside of the Austrian mountain town of Salzburg (meaning literally “salt town.”)[xiii] Of Celtic descent, these ancient Alpine salt miners were often caught inside their unstable caves when water and other forces caused the walls to shift and collapse. Later salt miners would find their shoes, clothes and bodies well preserved:

In the year 1573 . . . a man, 9 hand spans in length, with flesh, legs, hair, beard and clothing in a state of non-decay, although somewhat flattened, the skin a smoky brown color, yellow and hard like codfish, was dug out of the Tuermberg mountain . . . .[xiv]

It is believed the Celtic miners traded this salt across the Roman Empire and beyond, including into Britain, France, Spain, North Africa and Turkey.[xv] Other Europeans were also producing salt, including the Venetians, whose trade of salt with Constantinople made them very wealthy.

Back in Africa, by the 6th century AD, south of the Sahara, “Moorish merchants routinely traded salt ounce for ounce with gold,” and in Ethiopia, salt slabs, called amoles, were used as currency. In fact, Ethiopians continued to rely on salt as a “common medium of exchange,” at least through 1935.

In the intervening years, salt has played a pivotal role in the political economy of the world in a thousand different ways from starting wars to freeing people from colonial rule. Ironically, however, in the last quarter of the 20th century, salt itself was under fire, seen as a culprit that contributed to high blood pressure and the risk of stroke and heart attack. Now, the tide is turning again with recent scholarship indicating that too low of a salt intake could have adverse effects for heart patients and that the previous concerns about high-salt consumption and blood pressure may well be baseless.

After more than 150 random clinical trials and 13 population studies without an obvious signal in favor of sodium reduction, another position could be to accept that such a signal may not exist. (More on this in an article by our resident medical expert: Myth or Fact: Sodium Raises Blood Pressure)

Despite these recent studies, the CDC still estimates that excessive salt consumption costs $20 billion each year in additional health care expenses.  That said, their estimates may well be based on faulty assumptions about sodium consumption given extensive research done, particularly in the last decade, looking at the age old idea of salt and cardiac issues, finding no such connection when it comes to high-sodium intake.  Again, see the sodium/blood pressure article for more details.

A Brief History of Salt