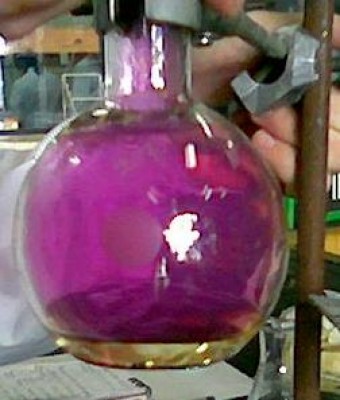 Iodine in a gaseous state. The fact that it is purple in this state is how it got its name, from the Greek for violet (iodes)

Today I found out why iodine is added to salt.

Iodine first began being added to salt commercially in the United States in 1924 by the Morton Salt Company at the request of the government.  This was done as a response to the fact that there were certain regions in the U.S., such as around the Great Lakes and in the Pacific Northwest, where people weren’t getting enough iodine in their diets due to it not being prevalent in the soil in those regions.  Among other problems, this caused many people to develop goiters (swelling of the thyroid gland, also sometimes spelled “goitre”).

About 90% of people who develop a goiter do so because of a lack of iodine in their diets, so the simple solution was to add iodine to something pretty much everyone consumes fairly regularly, namely salt. This practiced was not thought up by the U.S., but was copied from the Swiss who were adding iodine to salt at this time for the same reason.  This resulted in researchers at the University of Michigan testing this practice out with good results and subsequently Morton Salt Company adopting the practice on a national level.

This ultimately didn’t cost Morton and the other salt companies that followed suit much money, only a few cents per person per year in iodine, but drastically cut the number of people who developed goiters in the United States and beyond as the practice gradually became adopted throughout much of the developed world.

Today because most food in developed countries like the United States often isn’t grown locally, coming from all over the country and world, depending on the food item, continuing to add iodine to salt isn’t strictly necessary.  People in regions where the soil is lacking in iodine will likely consume plenty of food from regions where it is not, thus getting the iodine their bodies need, particularly because our thyroids don’t need much to function properly.

Even though most people get plenty of Iodine in their diets, because Iodine is so critical to our bodies functioning properly and the Tolerable Upper Intake Level is so high (about 1100 micrograms per day, and you won’t take a fatal dose unless you ingest about 2 million micrograms, or 2 grams), adding it to salt is still recommended by many government health agencies the world over to stave off certain health problems.

Specifically, Iodine is a critical element used by your thyroid in being able to synthesize certain gland secretions which, among other things, influences your heart, metabolism, nerve responses, etc.  Further, a lack of iodine during pregnancy and in the baby’s diet after being born can cause a myriad of significant health and developmental problems.  Iodine deficiency has also been linked to increased difficulty with information processing, diminished fine motor skills, extreme fatigue, depression, weight gain, and low basal body temperatures, among other things.