The Difference Between Kosher Salt and Table Salt 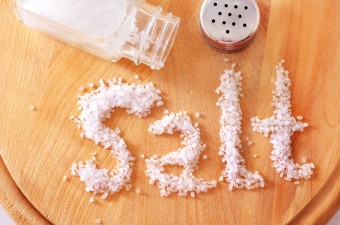 In truth, not much.  The primary ingredient to both, not surprisingly, is sodium chloride.  In fact, the U.S. government requires that any food-grade salt be a minimum of 97.5% pure, so any type of salt you consume in the U.S. (and most developed countries) is going to be almost exactly the same as any other type of salt in terms of what it is made up of.

However,  “Regular” or “table” salt does usually contain an anti-clumping agent, like calcium silicate or sodium ferrocyanide, and iodine (see Why Iodine is Added to Salt).  Kosher salt usually doesn’t contain either of these things, though occasionally some manufacturers do put an anti-clumping agent in. But this is rare and even when they do, it’s usually much less than is in table salt.

The most striking difference between Kosher salt and regular salt is just the grain size.  If you look at table salt under a microscope, you’ll see that table salt has been milled such that many of the salt crystals look like little cubes.  Kosher salt, on the other hand, is larger grained and less processed, allowed to keep its more random, crystalline structure.

This size difference is directly responsible for how Kosher salt got its name.  Contrary to what is often thought, Kosher salt is not called  “Kosher” because the salt itself is specifically certified as kosher. Rather, Kosher salt got its name because this larger grained version of salt was used in the process of koshering meat, specifically to remove surface blood from meat (hence “Koshering salt” was shortened in some regions, like most of the United States, to “Kosher salt”). Smaller grained salts, like table salt, would have a tendency to absorb more into the meat itself, which isn’t what they’re going for here.  By using larger grained salt, it absorbs the blood and then can be more thoroughly washed off after, removing the surface blood without making the meat overly salty.

As such, buying any old Kosher salt doesn’t actually guarantee that it is certified kosher (although most mass-produced, food grade salts, of various varieties, are certified kosher).  If you’re curious if the salt you have is certified kosher, just look on the container for a K or a U that is circled.  If it’s there, it’s kosher, regardless of grain size or added ingredients.