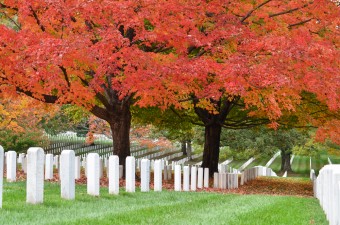 The final resting place of presidents, bandleaders, war heroes, astronauts, inventors, civil rights leaders, Pulitzer Prize winners, boxers, Supreme Court justices and sports stars, Arlington National Cemetery stands as a memorial to the melting pot of the United States. With connections to some of our nation’s most influential people and pivotal events, its history is as interesting as its denizens.

Arlington is situated on 624 acres overlooking the Potomac River directly across from Washington, D. C. Although today it is surrounded by the nation’s capital, at one time, Arlington was a bucolic estate with a neoclassical mansion, Arlington House. Still presiding over the grounds today, the mansion was built by George Washington’s (yes, that Washington) grandson and marks the beginning of the cemetery’s history.

Before she married George, Martha was married to Daniel Parke Custis. After he died and she wed the “Father” of our Country, George adopted her two surviving children. The oldest, John Parke Custis (JPC), died in 1781 while serving with the Revolutionary Army. He left behind four children, the youngest of which, George Washington Parke Custis (GWPC), was born only shortly before his father’s death.

GWPC and one sister went to live with the Washington’s. When he became of age in 1802, GWPC inherited wealth and property from his deceased father (JPC), including the Arlington land. Hoping to build a home that could also serve as a memorial to his grandfather, George Washington, GWPC hired an architect and built a Greek revival mansion believed by some to be “modeled after the Temple of Hephaestus in Athens.”

The home was built in pieces, with the north wing being completed in 1802, and the south in 1804. These two stood as separate buildings until the central section connected them in 1818. During GWPC’s life, a portion of the mansion was reserved to store George Washington memorabilia, which included portraits, papers and even the tent Washington used while in command at Yorktown.

GWPC and his family lived and died on the property, where many of them were buried.

In 1831, GWPC’s only surviving child, Mary, married Robert E. Lee (yes, that Lee). The Lee’s lived on the property with the Custis’s where they raised their seven children. At her father’s death, Mary inherited Arlington. Robert E. Lee loved the property and once described it as the place “where my attachments are more strongly placed than at any other place in the world.”

Prior to the Civil War, Lee had attended West Point (graduating second in his class) and saw service for the U.S. in the Mexican War (1846-1848). A respected and well-liked officer, Lee struggled with his decision to resign his commission of 36 years in order to take command of Virginia’s confederate forces. When he did in April 1861, this choice was seen as a betrayal of the Union by many of his former friends including Brig. Gen. Montgomery C. Meigs.

As Arlington, on high ground overlooking the capital, was critical to either the defense or defeat of D.C., Union leaders were eager to control it. After Virginia seceded in May 1861, Union troops crossed en masse into Virginia and soon took command of the estate. The grounds were quickly converted into a Union camp.

By 1862, Congress had passed a law that imposed a tax on the real property of “insurrectionists.” Mary was unable to pay the tax bill in person, and her proxy’s attempt to satisfy the debt was rebuffed. As a result, Uncle Sam seized Arlington, and at its auction, the federal government purchased the estate for $26,800 (about $607,000 today, far below market value).

Not only a good bargain, Union leaders felt that by seizing the estates of prominent Rebels, they would, in the words of Gen. William T. Sherman: “Make them so sick of war that generations would pass away before they would again appeal to it.”

In 1863, after thousands of former slaves, freed by the Emancipation Proclamation, converged on D.C., a Freedman’s Village was established on the estate “complete with new frame houses, schools, churches and farmlands on which former slaves grew food for the Union war effort.”

As one journalist described it:

One sees more than poetic justice in the fact that its rich lands, so long the domain of the great general of the rebellion, now afford labor and support to hundreds of enfranchised slaves.

As Union casualties began to mount in the spring of 1864, Gen. Meigs suggested burying some of the dead at Arlington. The first, on May 13, 1864, was Pvt. William Christman, a poor soldier whose family could not afford the cost of a burial. Soon, many other indigent soldiers were laid to rest on Arlington’s grounds, near the slave and freedman cemetery that had already been established. Realizing the efficacy of this system, Gen. Meigs urged Secretary of War Edwin M. Stanton:

I recommend that  . . . the land surrounding Arlington Mansion . . . be appropriated as a National Military Cemetery, to be properly enclosed, laid out and carefully preserved for that purpose.

Serving the dual goals of paying homage to the dead and making “Arlington uninhabitable for the Lees,” Meigs had prominent Union officers buried near Mrs. Lee’s garden. He also placed a mass grave of over 2000 unknown soldiers, topped with a raised sarcophagus, close to the house.

After the war, the Lee’s tried in vain to regain Arlington. Mary wrote to a friend that the graves: “are planted up to the very door without any regard to common decency.” After Robert E. Lee’s death in 1870, Mary petitioned Congress for the return of her family home, but this proposal was soundly defeated.

Shortly after, other monuments and structures honoring the dead were erected including numerous elaborate Gilded Age tombstones and the large, red McClellan Gate at the entrance to the grounds.

The family was not done, however, and in January 1879, following six days of trial a jury determined that the requirement that Mary Lee had to pay the 1862 tax in person was unconstitutional. On appeal, the Supreme Court concurred, so the property was once again in the hands of the Lee family.

Rather than disinter graves and move monuments, however, the federal government and Mary Lee’s son, George Washington Custis Lee, agreed on a sale. On March 31, 1883, Uncle Sam purchased Arlington from the Lee family for $150,000 (about $3,638,000 today).

Today, Arlington shelters the remains of over 400,000 souls. In addition to its famous sea of somber, beautiful white headstones, Arlington also hosts numerous monuments including the Tomb of the Unknowns, the Rough Riders Monument, the Pentagon Group Burial Marker and two memorials to the Space Shuttle tragedies Challenger and Columbia.

One of the National Cemetery’s most well known gravesites is that of President John Fitzgerald Kennedy with its eternal flame. Two of his children and Jackie Kennedy are also interred there.

William Howard Taft is the only other U.S. President buried on the grounds, and he along with three other Chief Justices and eight associate justices represent the Supreme Court at Arlington.

Of course, war heroes abound and famous generals buried at Arlington include George C. Marshall (father of the Marshall Plan that rebuilt Europe after WWII) and Omar N. Bradley.

Famous explorers interred at Arlington include Adm. Richard Byrd (the first man to fly over both poles) and Rear Adm. Robert Peary (another arctic explorer). John Wesley Powell (of Lake Powell fame) is also laid to rest at Arlington, as are several astronauts including Lt. Col. Virgil “Gus” Grissom and Capt. Charles “Pete” Conrad, Jr. (the third man to walk on the moon).

Other famous Americans buried at the National Cemetery include Abner Doubleday (who, in fact, had nothing to do with baseball contrary to legend), big bandleader Maj. Glenn Miller (who went missing in action on Dec. 15, 1944, so he really just has a headstone there), boxing’s Joe Louis, inventor George Westinghouse and civil rights leader Medgar Evers.

How Arlington Cemetery Came to Be

The Father of Our Country

The House Where Two Generals Connected