The Acoustic Shadow and the American Civil War 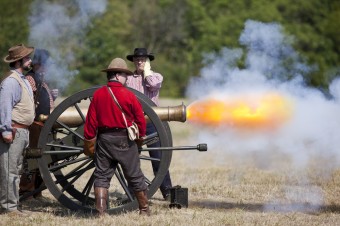 Where sound goes to die, acoustic shadows are areas where sounds, from a certain direction and on a given day, will not penetrate; these acoustic phenomena occur either because the sound waves are absorbed, refracted or simply blown in a different direction. Relatively unnoticed in our modern, wired world, the phenomenon played a significant role in some of the most famous battles of the American Civil War.

Wartime Communications in the 19th Century

Remember that when the Civil War was fought, long distance communications in the United States were primitive by today’s standards. While President Lincoln received battlefield reports from his commanders via telegraph, up-to-the-minute communications, particularly between always-on-the-go battle commanders, was frequently done through couriers. Other information, like battlefront status, was discerned, according to historian Charles Ross, simply by listening:

The sound of battle was often the quickest and most efficient method by which a commander could judge the course of a battle. Troop dispositions were often made based on the relative intensity of the sounds from different locations.

Therefore, if a commander was unable to hear fighting sounds, for whatever reason, he was effectively isolated from the conflict. Knowing that acoustic shadows interfered with command decisions during several major Civil War battles, Ross opined: “One might even go so far as to say the acoustical shadows determined the course of the entire war.”

You be the judge.

In western Tennessee near its border with Kentucky along the Cumberland River sat the Confederate stronghold of Fort Donelson. The Union, under then Brigadier General Ulysses S. Grant, attempted to take the fort in February 1862. Early on, those Union forces under the command of Flag Officer Andrew Foote, in ironclad ships on the Cumberland, suffered unexpected losses and were forced to retreat to a point approximately five miles to the north, where Foote met with General Grant.

Back at Fort Donelson, Confederate forces under Brigadier General Gideon Pillow attacked the Union division, now under the command of Brigadier General John McClernand. Grant and Foote heard nothing – likely due to an acoustic shadow caused by a thick blanket of snow that had fallen the previous day, as well as a strong wind that blew from north to south. The snow absorbed much of the noise and what was left was buffeted by the wind (technically, it was refracted upward, away from the ground – and General Grant’s ears).

Things were looking dire for the Union forces when, inexplicably, Pillow withdrew his men. When Grant returned, the Union attacked, routed the Confederates and ultimately accepted the unconditional surrender of those Confederate forces remaining.

Resulting in the death of Confederate Brigadier General Robert H. Hatton, this battle near Richmond, Virginia, also marked the beginning of General Robert E. Lee’s tenure as commander of the Army of Northern Virginia.

With his back to the wall, or rather Richmond, the leader of the Confederate forces, General Joseph E. Johnston, devised a complicated, three-pronged attack against General George B. McClellan’s Union Army of the Potomac. Requiring perfect timing and coordination, Johnston, who had little faith in the get-along ability of his subordinates, feared that they had failed to carry out their orders: from his headquarters close to the city, he could not hear any battle sounds and assumed there was no fighting. As a result, he refused to send in needed reserves until it was too late. When Johnston finally visited the battlefield, he was seriously wounded and, ultimately, had to be replaced by Lee.

Some believe Johnston was unable to hear the battle because of a temperature inversion caused by low cloud cover. This occurs when the air temperature farther above the ground is warmer than it is near the Earth’s surface; these conditions cause sound waves to first refract up away from the ground, and then down, resulting in, at times, “rings of audibility.” For the Battle of Seven Pines, this meant that Richmond citizens 10 miles from the battlefield heard fighting sounds, while Johnston, who was only two miles away, couldn’t.

Situated in northeastern Mississippi, near its borders with Alabama and Tennessee, lay the town of Iuka. On September 14, 1862, Confederate Major General Sterling Price placed 14,000 men in the path of Union Major General William S. Rosencrans. The commander of forces in the area, now Major General Grant, ordered an attack on Price at Iuka, to be commenced by two different groups: one under the command of Major General E.O.C. Ord, and the other under General Rosencrans.

Encountering difficulties coordinating the two fighting parties, Grant directed Ord to wait to fully attack Price until he heard Rosencrans’ assault. Due to a strong wind blowing away from Ord, he never heard any fighting sounds. By the time Grant and Ord joined the battle, Price had already eluded Union forces and, together with his men, evacuated to safety.

Near Fredericksburg, and Virginia’s border with Maryland, raged the Battle of Chancellorsville. Although General Robert E. Lee ultimately won the battle, Chancellorsville may be best known for witnessing the death, by friendly fire, of famed Confederate Lieutenant General Thomas “Stonewall” Jackson.

In his last, and perhaps greatest, military victory, General Jackson bravely led his troops on a dangerous maneuver that put them in a position to attack the left flank of the Union Army of the Potomac (led by Major General Joseph Hooker).

The tactic worked, some say, in no small part due to an acoustic shadow that shielded the sound of Jackson’s attack from Hooker. Records indicate Union balloons were kept on the ground due to high winds during the battle, and Ross believes those same winds may have refracted the battle sounds at Chancellorsville.

More people were killed or wounded in the Battle of Gettysburg, in Pennsylvania, near its border with Maryland, than in any other Civil War battle. Considered by many historians to be the war’s turning point, and memorialized by our 16th President in a famous speech, Gettysburg witnessed the epic clash of two great armies. At Little Round Top, Devil’s Den and Cemetery Ridge, Union General George Gordon Meade and Confederate General Robert E. Lee fought ferociously until Lee’s dramatic infantry assault, known as Pickett’s Charge, was repulsed and Lee retreated.

On the second day of battle, two of Lee’s lieutenant generals, Richard S. Ewell and James Longstreet, were ordered to attack the Round Top mountains from opposite sides. Ewell was to begin his assault when he heard Longstreet’s artillery barrage; however, he never heard Longstreet’s attack, and Union General Meade was able to successfully defend against the assault.

Ross asserts that two forces combined to create the acoustic shadow that prevented Ewell from hearing Longstreet. First, he posits that the two large natural formations, Cemetery Ridge and Culp Hill, shielded many of the battle sounds from the general. Second, he believes that the hot temperatures near the ground caused sound waves to dramatically refract upward (and perhaps later to hit a warm layer higher up, sending out more rings of sound). In support of this last point, Ross notes that people in Pittsburgh (150 miles away) heard the battle on July 1, but those in Taneytown (12 miles away), could not.