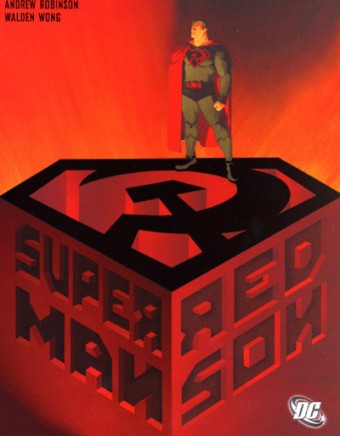 If you’ve ever sat around thinking, “What if Superman was a communist?”  (Who hasn’t, right?) Well, wonder no more. The answer was masterfully provided in Superman: Red Son written by famed comic book writer and member of the “Most Excellent Order of the British Empire”, Mark Millar.

The specific comic book in question was a mini-series (3 issues) published by DC Comics in 2003 and is a true gem of comic art. For this mini-series, Millar came up with a unique and brilliant concept. In his own words,

Instead of landing in Kansas as a child, I’ve decided to explore what could have happened if his rocket would have landed on a collective farm in the Soviet Union. Instead of working for the Daily Planet, he’ll be a reporter for Pravda. There’s a reversal of the current situation, this time it’s the U.S.A. that’s splitting up with Georgia and Louisiana demanding independence – tanks rolling through the streets of New Orleans. I’ll be including a whole bunch of DC characters, like Batman and Green Lantern – who you’ll see in a new light.

What inspired Millar to write such a version of Superman’s history?

Red Son is based on a thought that flitted through my head when I read Superman #300 as a six year old. It was an imaginary story where Superman’s rocket landed in neutral waters between the USA and the USSR and both sides were rushing to claim the baby. As a kid growing up in the shadow of the Cold War, the notion of what might have happened if the Soviets had reached him first just seemed fascinating to me. As I got older, I started putting everything together and I first pitched something to DC when I was thirteen, I think – although it was in a much cruder form, of course, and my drawings weren’t quite up to scratch.

With time and a lot of hard work, Millar gained significant experience , which allowed him to, after a decade in the business, finally publish Superman: Red Son.

Reading the comic book today, one can tell that Millar never varied (significantly) from his original idea for the story. In the story, Superman indeed lands in the Ukraine and not in Kansas.  He was raised as a proud Soviet, who was taught to love and serve the communist principals of the Soviet Union, but he’s still the same compassionate, fair, courageous and fearless superhero who loves humanity more than anything. He still obeys his super hearing and responds to every call for help. His favorite “habit” remains saving lives.

Despite the similarities, however, there are significant differences that can’t go unnoticed.  For example, he is not the geeky journalist that we expect him to be. Instead, he becomes a high ranking officer of the Communist Army. His identity is not simply a private secret he hides, but a state secret that the government of his country helps him hide. His uniform doesn’t carry the popular Superman shield and, instead, carries the symbol of the communist Soviet Union: The hammer and sickle. Superman is not fighting for “truth, justice, and the American Way” and, instead, is “the champion of the common worker who fights a never-ending battle for Stalin, socialism and the international expansion of the Warsaw Pact.”

Indeed, at a certain point during the story, Superman becomes  the undisputed leader of the Soviet Union and then the world.

Another relevant difference is Lois Luthor -yes Luthor- the first lady of the United States, married to Lex Luthor, who is still an amoral genius and remains Superman’s #1 enemy.

As for the end of the story? I recommend you read it because it’s fantastic.  But if you just want the gist of it instead of hours of entertainment, major spoiler alert ahead.

Briefly, eventually Superman realizes his world conquest is wrong and tries to turn back, but is attacked by one he thought was his ally.  This supervillain is defeated by Luthor.  In the meantime,  Superman ends up saving the world by taking said supervillain’s ship, which is powered by singularities that are about to collapse, out into space where the singularities do, indeed, collapse.  At this point, it would seem Superman is dead.

Luthor takes back over creating a world-wide United States and our planet is at peace.  Thanks to medical advancements, Luthor is able to live for many centuries.  When he does die, Superman in the guise of a more traditional Clark Kent attends Luthor’s funeral.

Here’s the twist.  Fast-forward billions of years and the Earth is being destroyed by the Sun in its Red Giant phase.  That’s when one of Lex Luthor’s descendents, Jor-L, puts his son in a rocket.  After his journey, his son, Kal-L, ends up landing in the Ukraine in 1938.