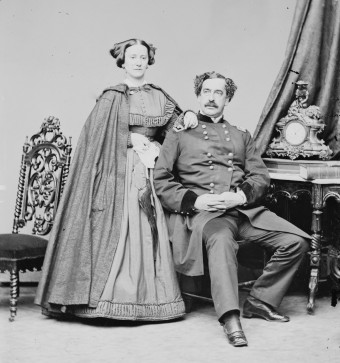 General Abner Doubleday and His Wife

The myth that baseball was invented by Abner Doubleday has been widely spread since 1907 and even today is sometimes stated by such people as former Major League Baseball commissioner Bud Selig. For instance, in 2010 he stated: “As a student of history, I know there is a great debate whether Abner Doubleday or Alexander Cartwright really founded the game of Baseball. From all of the historians which I have spoken with, I really believe that Abner Doubleday is the ‘Father of Baseball’. I know there are some historians who would dispute this though.” In truth, all historians who have studied the matter would dispute this.

Why? The fact of the matter is there is no record- not one- of Civil War General Abner Doubleday having anything to do with baseball. This includes Doubleday himself never mentioning it in the many letters and journals he wrote in his lifetime. Somewhat humorously, the only real reference to Doubleday concerning sports appeared in an obituary written about him in 1893, which stated he was a man “who did not care for outdoor sports”.

So what happened in 1907 to make people start thinking Abner Doubleday invented baseball?  In 1905, Albert Spalding put together a panel called The Mills Commission to investigate the origin of baseball.  This was in response to an ongoing argument he’d been having with Henry Chadwick about the origin of baseball.  Chadwick claimed, correctly, that baseball evolved from a variety of stick ball games from Europe, primarily the game of “rounders” Chadwick had played as a boy in England.  Spalding claimed baseball was invented free of such influences and was a wholly American-made sport.

Initially this group had very little luck in discovering a definitive origin of baseball, though by all accounts they didn’t try very hard to actually do any research.  They seemed to simply rely on placing advertisements, requesting that if anyone knew anything about the origin of baseball, they should respond.

Finally, in July of 1907, Spalding sent a letter to the Commission outlining an account of the origin of baseball he’d learned from 71 year old Abner Graves, a mining engineer, who incidentally shortly after giving this account wound up in an insane asylum, where he spent the rest of his life.  According to Spalding, who embellished Graves’ statement, on a fateful day in 1839, the man who would later become a Civil War hero, supposedly interrupted a game of marbles and taught a group of boys to play a sport he’d just invented.  Based solely on this story and without bothering to check into its accuracy, The Mills Commission decided that baseball had been invented by General Abner Doubleday in Cooperstown, New York in 1839.

It should be noted, though, that Graves’ letter did not set a definitive date.  He seemed to think this event happened sometime between 1839 to 1841; it was the Commission that settled on 1839, at which point Graves would have been five years old.  Further, contrary to what you’ll often read, Graves initially didn’t claim to have been there when the game was invented (though he later changed his tune and said he played in that game).  He initially just said “I do not know, nor is it possible to know, on what spot the first games was played according to Doubleday’s plan.”

He then recounted the rules Doubleday supposedly laid down which were actually more or less just rules for a version of Town Ball.  Town Ball was a game commonly played by school boys throughout the U.S. with the exact rules varying based on where you played it.  It, in turn, evolved from the English game “rounders”.  Spalding and the Commission embellished Graves’ story to make it sound more definitive.

It is possible Abner Doubleday really did play a game of Town Ball in the late 1830s in Cooperstown, as this was a common game and there would have been nothing unique about a young man playing a version of it, but he certainly didn’t do it in 1839.  Abner Doubleday wasn’t in Cooperstown in 1839, he was at West Point at the time, which is about 150 miles away and West Point has no records of him taking leave, including him remaining at the school throughout that summer.  Given Abner Graves was four years old when Doubleday left Cooperstown for West Point, it’s not clear how he learned of the details of this supposed first game.

Close friends of Doubleday, which included A.G. Mills who was on the Commission, claimed that not only could they not remember a single instance of Doubleday ever claiming to have had anything to do with baseball, none of them even remember him even mentioning the sport at all, despite its spreading popularity towards the end of Doubleday’s life.  Doubleday died in 1893, so he couldn’t be asked directly.  Given how well documented his life was, particularly through his journals and letters, it seems curious that he never mentioned it in word or in text, if we’re assuming he invented it.

Despite not bothering to check up on this story at all, The Mills Commission decided it was true and the tale was widely published.  They were motivated by the fact that Abner Doubleday was a Civil War hero who rose to the rank of Major General.  Further, the idea that baseball sprang out of the farm fields in small town America was an appealing one to the Commission. One of the underlying goals of the Commission was to prove that baseball had been wholly invented in the United States and did not evolve from a variety of European stick-ball games. Graves’ story not only did this, but “proved” that an American war hero had invented it to boot. As A.G. Mills stated in 1926 when asked what conclusive proof the Commission had that Doubleday invented the sport, he replied:

None at all, as far as the actual origin of baseball is concerned. The committee reported that the first baseball diamond was laid out in Cooperstown. They were honorable men and their decision was unanimous…

I submit to you, gentlemen, that if our search had been for a typical American village, a village that could best stand as a counterpart of all villages where baseball might have been originated and developed — Cooperstown would best fill the bill.

Henry Chadwick, who is the only writer ever inducted into the non-writer’s wing of the Baseball Hall of Fame, had this to say about The Mills Commissions‘ findings, in a letter he wrote to Sam Crane:

Friend Crane, I thank you for your support of my arguments in the controversy between Al Spalding and myself as to the origin of the National Game. Spalding must realize that the rounder argument overwhelms the ridiculous fraud of Mr. Graves and the findings of the commission which are inherently flawed. It seems “Young Albert” [Spalding] is overzealous in his patriotism to a fault. Indeed, baseball is a truly American Game – but it evolved – and I am old enough to bear witness to this like my old friends Mr. Peck and Mr. Curry. Again many thanks for your letter. It is promising to see others interested in the truth.

As Chadwick thought, the truth of the matter is that baseball wasn’t “invented” at any particular time nor by any particular group.  It was more of an evolution of a variety of games played with a ball and a stick, something humans have apparently been doing since there were sticks and rocks.

Recent manifestations of these stick/ball games that predate baseball include one such game played in 1796 in England called “Englische Base-ball” that was played with two teams where “the batter has three attempts to hit the ball while at the home plate.”  Each side was given just one out.  Another popular game in England, mentioned by Chadwick, was known as “rounders”, which is typically attributed to being a more direct ancestor of baseball.  In rounders, the rules were slightly different depending on where you played, but basically it was a stick and ball game, played on a diamond, with bases.  The batter would attempt to hit the ball into play and run to a base before being tagged out (which included being hit by the ball if someone threw it at you).  This gave rise to “Town Ball” in the U.S., of which there were many varieties.

Further, if baseball can be said to have been invented anywhere, it was not in the pastures of small towns, like Cooperstown, but in cities, by both school boys and adults alike. According to future Knickerbocker William Wheaton, one such adult group, just looking for a fun way to get some exercise, formed a Town Ball team called “The Gothams” in 1837.  A few years later, this group grew so large that they had to split, with part of the group forming the Knickerbockers, named after the Knickerbocker Fire Engine Company.  The Knickerbockers then adapted the rules of various stick ball sports to make one that suited their particular purpose to get exercise in a fun way with little chance of injury (so, for instance, they got rid of the somewhat common rule that you could throw a ball at someone and if it hit him, he’d be out).

The rules for this adapted game were codified in Hoboken, New Jersey on the Elysian Fields, with the first official “base ball” club being the New York Knickerbockers, led by Alexander Cartwright (bookseller and volunteer fire fighter). There were many such similar clubs around at the time, playing extremely similar games, but it is through the Knickerbockers’ efforts that the modern game was popularized. They developed the “20 rules and regulations of the Knickerbocker baseball club”, which were eventually adopted by other clubs and as the official rules of this “new” sport.   The first recorded baseball game was held on June 19, 1846.  The game was played on the Elysian Fields between the New York Nine and the Knickerbockers, at the time the only two clubs playing by this exact set of rules.  The Knickerbockers lost 23-1.

It was also on the Elysian Fields that the idea of baseball as the official American pastime first came about.  Henry Chadwick, the creator of the baseball box score and one of the game’s most ardent supporters in the press, saw one of these matches at the Elysian Fields, stating:

I chanced to go through Elysian Fields during the progress of a contest between the noted Eagle and Gotham Clubs. The game was being sharply played on both sides, and I watched it with deeper interest than any previous ball match between clubs I had seen. It was not long before I was struck with the idea that base ball was just the game for a national sport for Americans.

Within 20 years of the sport’s creation with set rules, the Elysian Fields were host to games that would draw as many as 20,000 fans. Somewhat ironically, given history since, baseball was made popular over a variety of other similar games, largely due to various professional gamblers taking notice of the sport.  As John Thorn, the Official Baseball Historian of MLB states,

By the 1870s, because of the fact that fenced off stadiums where teams could collect money were being built, the Elysian Fields dwindled in popularity as the home field for various club’s matches.  The last official professional baseball game to be played in the Elysian Fields was in 1873.  Today, the place where the field was is mostly covered in houses, with a small area of the field preserved by Hudson Street and Frank Sinatra Drive on one corner and Castle Point Terrace and 11th and Washington Street on the other.