The Mad Queen of Madagascar, Ranavalona I 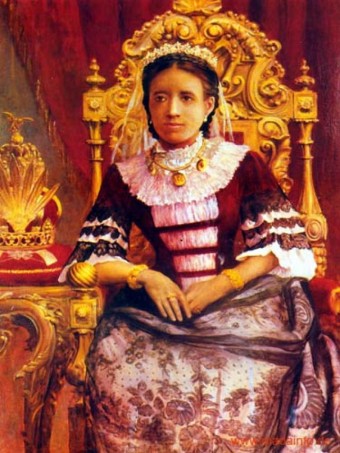 Today I found out about Ranavalona I, the Mad Queen of Madagascar.

Ranavalona I started out in life as a girl named Ramavo. Born in 1788 in Madagascar, she had humble origins as a commoner’s daughter. When her father learned of a plot to murder the future king, Andrianampoinimerina, he told his master and the plot was foiled. As thanks for saving his life, Andrianampoinimerina adopted Ramavo as his own daughter. In addition, he arranged for her to marry his son, Radama.

As such, when Radama became King Radama I, Ranavalona became his first of twelve wives. In this position, it was her children who would become heirs to the throne. As in many cultures, the need to create “an heir and a spare” was very much in place in order to secure the line of succession. However, King Radama and Ranavalona never produced any children. This became particularly problematic when the King died after a bout of syphilis.

The rightful heir to the throne was Prince Rakotobe, Radama’s nephew. However, Malagasy tradition stated that any children that Ranavalona bore would be considered children of Radama, whether they were actually his or not. This would obviously threaten Rakotobe’s claims. The smartest thing for Rakotobe to do would be to kill Ranavalona—and she knew it.

She had already befriended many people who believed in the traditional Merina (their tribe) way of life. Her husband had allowed Christian missionaries onto Madagascar, earning him many enemies, and people feared that Rakotobe would follow in his uncle’s footsteps. Many traditionalists believed in Ranavalona, and she was able to rally enough military men to hold down the palace in those first few days after Radama’s death.

When people came defending Rakotobe’s right to the throne, they were met with a choice: accept Ranavalona as queen or face the consequences.

As a result, this commoner’s daughter was crowned Queen on June 12, 1829. Some of her first acts were to kill Rakotobe and his mother, along with many of his relatives. At her coronation, she proclaimed:

Never say, ‘she is only a feeble and ignorant woman, how can she rule such a vast empire?’ I will rule here, to the good fortune of my people and the glory of my name! I will worship no gods but those of my ancestors. The ocean shall be the boundary of my realm, and I will not cede the thickness of one hair of my realm!

Strong words, but whether or not Ranavalona’s rule was “good fortune” for her people remained to be seen. She certainly did attempt to stick to traditional values by overturning nearly all of her husband’s policies: she kicked the missionaries out, threw away trade agreements with France and England, and fought off an attack from the French navy.

Once, one of Ranavalona’s lovers—whom she had caught with another woman—refused to do this and was promptly speared in the neck. After a battle against the French and English, 21 European heads could be found on pikes, warning others of their countrymen’s mistakes.  That said, the battle was won mostly because the people of Madagascar were lucky—many of the foreigners fell victim to malaria.

Meanwhile, Ranavalona forbade the practice of Christianity within her kingdom; she wanted nothing to do with the teaching of Christianity, baptisms, or Sunday services. In 1835, she said that she would not deny foreigners their freedom of religion, but it was not to be taught to her people, and “whoever breaks the laws of my kingdom will be put to death—whoever he may be.”

Many foreign Christians fled, leaving their converts to face fines, imprisonment, torture, and execution. At one point, Ranavalona ordered that fifteen Christian leaders dangle by ropes over a rocky ravine. Their ropes were then cut, sending them to meet their maker. A few thousand people were thought to have been persecuted for religious reasons under Ranavalona’s rule.

Understandably, Ranavalona is portrayed as a brutish tyrant by many of her contemporary European leaders. Her own people grew somewhat wary themselves, particularly as Ranavalona’s behaviour became more and more erratic. For instance, in 1845 she demanded that the entire court—along with a huge number of servants and slaves—go on a buffalo hunt. A total of 50,000 people set off to hunt buffalo. They carried with them very few supplies and had to build a road as they went as per Ranavalona’s orders. Many dropped dead from hunger and exhaustion, and it’s thought that around 10,000 people died during the 4-month-long hunt  in which no buffalo were killed.

Along the way, Ranavalona bore a son named Rakoto, who, due to tradition, became the late King Radama’s legitimate heir. Rakoto did not agree with many of his mother’s policies and participated in several plots against her life, none of which succeeded. Nevertheless, he was still named heir to the throne and took over when she died peacefully in 1861.

“Mad” though she might have been and a tad brutal, Ranavalona was actually quite a good politician and leader. She did her best to retain her country’s cultural heritage, defended it against more powerful foreign nations who wanted to take advantage of the island’s resources, and expanded her territory to cover nearly the entirety of Madagascar. That said, the death toll associated with Ranavalona did not stop with her death. At her funeral, a barrel of gunpowder was accidentally ignited and the resulting explosion killed several funeral attendees, perhaps a fitting end to her reign.

Rakoto, who took on the name Radama II after his coronation, reversed many of his mother’s policies, but proved himself to be inept when it came to spotting assassination plots, and was killed just a few years into his reign.