Sleeping Beauty is Based on a Story Where a Married King Finds a Girl Asleep and Can’t Wake Her, So Rapes Her Instead 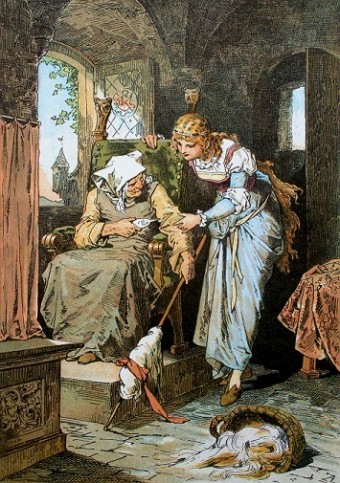 Today I found out Sleeping Beauty is based on a story where a married king finds a girl asleep and can’t wake her, so rapes her instead.

The story is called The Sun, the Moon, and Talia, written, or at the least collected and composed, by the Italian poet Giambattista Basile. It was published in 1634 in his “Pentamerone” collection of fairy tales, which also includes the first known version of Cinderella and Rapunzel, and includes a version of Puss in Boots.

Basile was more or less the “Brothers Grimm” of his time.  In fact, Wilhem Grimm said of Basile’s work,

This collection [Basile’s Pentamerone] was for a long time the best and richest that had been found by any nation. Not only were the traditions at that time more complete in themselves, but the author had a special talent for collecting them, and besides that an intimate knowledge of the dialect. The stories are told with hardly any break, and the tone, at least in the Neapolitan tales, is perfectly caught…

While there are several variants of The Sun, Moon, and Talia told since the first documented instance, the basic story is of a baby girl named Talia, born to a powerful ruler.  The wise men of the kingdom prophesy that the girl will meet her death from a flax splinter.  Rather than just instruct his daughter never to go near flax or wear any clothes made of it or it would mean her death, as would have been the sensible thing to do, the ruler commands that all flax and hemp in his palace be removed and apparently doesn’t mention it to her.

When the girl is older, she observes an old woman outside of her window spinning flax on a spindle, something Talia has never seen before.  She then goes down and convinces the woman to allow her to stretch the flax, at which point a splinter from it gets lodged under her fingernail and she seems to die.

Rather than bury Talia, her father has her adorned in her most expensive, beautiful outfit, and leaves her in one of his palaces in the woods, which is then closed up and abandoned.

On a hunting trip, a king stumbles on this estate and attempts to get in to retrieve his falcon that had flown inside.  After being unable to get anyone to answer the door, he scales the wall and climbs in through the window his falcon flew in at.

Up to this point, it could have been the Disney version of the story.  Here’s where it gets weird.  Upon entering the estate, the king wanders around, finding the house empty except for a beautiful young woman who despite his best efforts, he couldn’t wake.  So

being on fire with love, he carried her to a couch and, having gathered the fruits of love, left her lying there. Then he returned to his own kingdom and for a long time entirely forgot the affair.”

Talia became pregnant and the babies were born and cared for, as was Talia, by kindly fairies. (Where were they when she needed protected from being raped? ;-))  The fairies would put the babies up to Talia’s breasts to feed, except one time, one of the babies instead sucked on Talia’s finger with the splinter in it and sucked it out, at which point she woke up.

Quite a while later, the king remembered the girl and decided to go back to the house to see her again (classy). This time, though, he found her awake (awkward) and with twin babies she named “Sun” and “Moon”, as their origin was just as mysterious to her as the origin of the Sun and the Moon.

After the king explained to her how she’d gotten pregnant, rather than be upset with him and call the local law enforcement, she instead decided she loved him (he was no doubt, dreamy) and he decided he loved her too.  And they lived happily ever after… except, you know, he was already married and his wife had become suspicious of where he’d gone because when he came back, he started saying Talia’s and the children’s names in his sleep.

The queen then forced the king’s secretary to tell her everything or she’d have him killed.  After finding out about Talia and the children, she then sent for the kids in the name of the king in order that she might have the cook kill them and feed them to the king. While the king is eating, she keeps telling him, “You are eating what is your own.”  To which he replies, “I know very well I am eating what is my own, because you brought nothing with you into this house!”

Next, the queen sent for Talia in the name of the king and confronts Talia saying, “Are you the whore who has been enjoying my husband? Get ready to be welcomed in hell, because you will soon be going there.”  She then prepared a fire in the courtyard to burn Talia in, despite Talia vehemently explaining that she had no part in the king having taken advantage of her while she was unconscious.

To stall for time, Talia asked if she can strip naked before being thrown into the fire. While slowly stripping, she continually screamed, at which point the king came bursting in, finds out what happened and has his wife and secretary killed instead, the latter of which apparently was destined to die whether he’d told the queen anything or not.

The king also tried to have the cook killed, but finds out the cook had actually spared his children and had hidden them when the queen asked him to cook them up. Thus, he was spared and given a large reward.

So now, with the queen finally out of the way, the king is free to marry his raped mistress and now they really do live happily ever after, with the last line of the story being (translated):

Lucky people, so ’tis said,
Are blessed by Fortune whilst in bed.