Where Did the Phrase “Take a Gander” Come From?

September 22, 2012 Eddie Deezen
S.Belsky asks: Where did the phrase “take a gander” come from? What the hell is a “gander” and why would I want to take it? 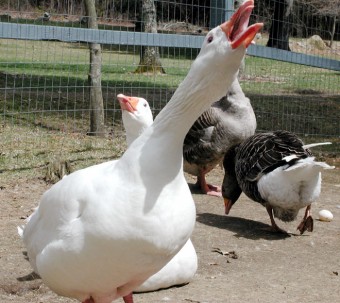 As you are no doubt aware, but for those who aren’t familiar with the phrase, “take a gander” is an expression meaning “take a look”, “get a peek”, “check it out”, etc.

It first popped up around the late 19th / early 20th century.  It is based on the “male goose” definition of “gander”.  “Gander”, meaning “male goose”, derives from the Old English “gandra”, which ultimately comes from the Proto-Indo-European root *ghans-, meaning “goose”.

So how did “take a gander”, essentially meaning “take a male goose”, come to mean “take a look”?  It is thought by some etymologists to have originated from “thieves’ slang”, much like “tip” as in “leave a tip”, but this time originating in the United States, rather than Brittan.

Whether thieves came up with it or not, this usage is referencing the fact that geese have long necks and like to poke their heads just about everywhere (literally, watch out if you’re around a gaggle of people friendly geese, particularly if you’re wearing a dress or just if you’re a guy and want to keep your sensitive bits unpoked).

So, basically, geese appear to be a bunch of rubberneckers. Thus, to “take a gander” meant to “stretch your neck and see”, as a long-necked goose would.

In the beginning of this sort of “look” definition of “gander”, the word was often used as a verb, rather than in the phrase “take a gander” where it is used in its noun form. But starting around 1914, this switched and over the next several decades the noun form became more common and today hearing someone use the verb form is fairly rare.