Why the Dodo Went Extinct 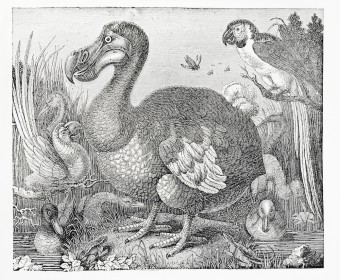 In all likelihood, this popular notion of how the dodo looked is probably completely wrong.

The dodo, or Raphus cucullatus if you want to get fancy, is an extinct species of flightless bird that was native to the tiny island nation of Mauritius before it sadly died out. But enough of the Discovery Channel stuff, you’re reading this to find out how this sucker went extinct. And the answer is, well, complicated.

It’s commonly believed that the dodo went extinct because Dutch sailors ate the beast to extinction after finding that the bird was incredibly easy to catch due to the fact it had no fear of humans, (why it didn’t fear the creature many times its size is a mystery for another day). This is, for the for the most part, pretty accurate. It is noted that after sailors landed and settled on the island in 1598,  the dodo’s population rapidly declined and other sources confirm that the dodo was indeed hunted by sailors looking for an easy snack, since the dodo’s ungainly gait and lack of a third axis of movement made it relatively easy to catch.

However, in this paper released by the Oxford University of Natural History, it’s the animals the sailors brought with them that are named as one of the key reasons our hapless feathery friend saw his demise. Pigs, dogs and rats are all animals said to have developed a taste for dodo eggs; this introduction of such animals into a foreign ecosystem, combined with humans hunting and eating them, saw the delicate balance the dodo had enjoyed for so long destroyed. The species was soon cripplingly endangered. And as a result, it faded from existence.

This is just one of many facts about the dodo that still doesn’t have a clear answer. For example, the date the bird officially went extinct is as muddled as the date it was first discovered. The Oxford University link above states that the dodo was extinct by 1680, a fact that is echoed in many other sources; however, scientists plotting the last known sightings of the bird on a graph suggest that the actual date is 10 years later than this estimate. On the other hand, as noted in the book, Lost Land of the Dodo: The Ecological History of Mauritius, Réunion and Rodrigues, one of the foremost texts on the bird and its demise, it states that the last, accepted confirmed sighting of a live dodo fell many years before this in 1662. Meaning there’s a 30 year gap of sweet dodo limbo, in which we’re not sure what the dodos did during this time, but we hope they enjoyed it.

Funnily enough, despite being one of the most famous extinct animals of all time, right up there with the wooly mammoth, no one actually knows exactly what the dodo looked like. As noted in this article by the BBC, complete skeletons for the animal are incredibly rare, one of the last was destroyed in a fire in 1755; hell, even the model in the natural history museum is a composite of various specimens and they’re the people literally tasked with documenting and storing animal remains.

However, the commonly accepted image of the dodo, one of an overweight, dumpling of a bird, is likely false. In reconstructions of recently found bones, it would appear that the dodo was actually a lot sleeker and agile than the artists of the past gave it credit for. Oddly enough, the cliched image of an overweight dodo stems all the way back to when they were first spotted, though images of thinner dodos are known to exist (including ones sketched by Jacob Van Neck who was one of the first to sketch them); but these are vastly outnumbered by ones of dodos looking like they lived on a diet of nothing but sticks of butter mixed with bacon grease. A suggested reason for this disparity is seasonal fat changes, though like with everything else to do with the dodo, no one is exactly sure if this is the case.

In keeping with this theme of no one being exactly sure about anything to do with the dodo, even the word “dodo” itself has contestation to its routes. The three main candidates are either,  the Dutch word “dodoor“, the Portugese word, “duodo“, or our personal favourite, the Dutch word, “dodaars” which roughly translates as “knot-arse“. The other two words translate to “sluggard” and “fool” in their respective languages, but since sailors aren’t exactly known for the eloquence, “knot-arse” seems as likely as anything.