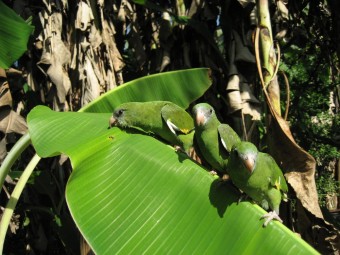 Today I found out that parrots name their chicks.

Scientists have known for a while that, in addition to saying things like “Polly want a cracker” (see Bonus Facts below) to entertain humans, parrots appear to vocalize their own names. What was a mystery until a few years ago was if those names were innate, meaning the chicks teach other parrots their own name, or if they were named by other parrots and then learned the sounds to identify themselves. A National Geographic research team headed by then doctoral student Karl Berg researched the green-rumped parrot and found that it is, in fact, the parents naming the chicks, rather than the chicks coming up with their own names.

In the experiment, the research team set up hidden cameras and audio recorders in 17 different nests of wild green-rumped parrots in Guarico, Venezuela.

Eight of the 17 nests were controls: the parent parrots laid eggs and raised their own children like they normally would. The other nine nests had their eggs swapped out and different eggs were given to different parents.  Why is this important?  Because there are strong name similarities within a particular family and group.  So if they were switched and the sounds for their names were genetically inspired, rather than given to the chicks, the similarity should disappear.   It was a sort of “nature vs. nurture” experiment.

Much more demonstrative is that the research showed that parents named their chicks before the baby parrots could utter a sound, so the chicks really didn’t have much to say about it.

The research also evinced that the chicks learn their names within a few weeks of hatching and begin to mimic the sound.

Parrots aren’t the only creatures to name their children, though it is a rarity in the animal kingdom. In addition to humans, dolphins are also known to have individual names. Scientists believe that names come in handy in dolphins’ more sophisticated social structure. When a dolphin is lost, the pod can call the dolphin’s name so that the lost dolphin can find them again.

As for parrots, they aren’t certain about how naming parrot chicks helps the species in the wild, but they do have a few theories. For instance, it’s possible that naming their chicks makes it easier to find them in large flocks as they fly long distances to communal foraging sites. They need to keep track of each other because green-rumped parrotlets are dependent upon their parents for a relatively long time in comparison with other creatures. Three weeks after they officially leave the nest, they still rely on mom and dad for food. Getting lost during that time could mean starvation. So, much like a mother calling a child who might have gotten lost in the grocery store or at an amusement park, parrots might need to call their children home for dinner.