The History of Toast 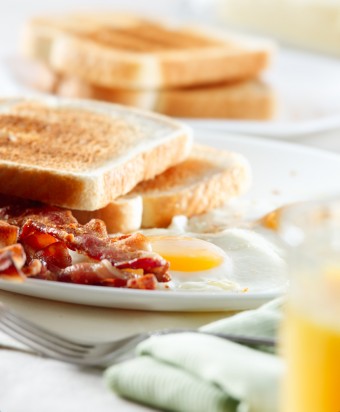 Today I found out about the history of toast.

The history of toast begins, of course, with bread. The earliest archaeological evidence of flour dates back some 30,000 years, and it’s likely people were making flatbreads around that time, too.

Along with being a staple food in many civilizations, ritual bread was sometimes used as an offering to the gods in Ancient Greece. Wheat and barley were a few of the first crops domesticated in the Fertile Crescent—despite not being as nutritionally rich as other food sources that could be gathered, the bread that resulted from grain crops was able to sustain a larger population. It’s thought that the ability to make bread was a factor in ancient peoples being able to end their nomadic lifestyle and settle in one place.

Bread as we know it today was likely invented in ancient Egypt. The Egyptians learned that if they left dough sitting out for a while, it would rise. When baked, the bread would retain its risen shape. This was, of course, due to yeast spores in the air finding their way to the dough.

The closed oven was invented in Egypt for the baking of leavened breads by 3000 B.C., and the workers who built the famous pyramids were often paid partially with bread. (Yes, contrary to popular belief, it is no longer thought that the pyramids of Giza were built by slaves.  Archeological evidence shows that the worker’s town comprised of whole families, not just men as would have been the case if they were slaves.  Further, the people were well taken care of including the highest quality health care available at the time and they were also extremely well fed.  These and other such hints from the past, relatively recently discovered, seem to indicate that the laborers were there of their own volition.)

At this point in history, leavened bread was a lighter bread that was considered much nicer than flat breads. There was just one problem: left out in the desert heat for long periods of time, it would go hard and became difficult to eat.

The solution? Toast. It’s likely that toast originated as a way to preserve bread rather than as a tasty breakfast item smothered in butter and jam. By scorching slices of bread, they lasted longer as a palatable food. (This is also why “French” Toast first began being made– it’s all about not wasting food.)

The practice of toasting bread became popular in the Roman Empire. The word “toast” actually comes from the Latin “tostum,” which means “to burn or scorch.” The first breads were likely toasted by laying them in front of the fire on a hot stone. Later, simple devices were created to toast bread in the fire, such as wire frames to cook the toast more evenly, or even sticks like those we use to toast marshmallows over a campfire today.

The first electric toaster was invented in 1893 by Scotsman Alan MacMasters, but it wasn’t very popular. The iron wiring would often melt, creating a fire hazard. That was if people could use the toaster at all, as electricity wasn’t widespread at this time.

In 1905, two Chicago inventors created an alloy that was highly fire resistant. That meant others could take another shot at a safer, more effective electric toaster. Several different electric toasters were invented around the same time. These toasters could only toast one side of the bread at once, and then the bread had to be flipped. Future developments included the automatic toast-turner (created in 1913) and the semi-automatic toaster, which turned off the heating element when the bread was cooked. The “modern” timed pop-up toaster was created in 1919.

By this time, an invention was in the works that would make grabbing some toast in the morning even easier: pre-sliced bread. The world’s first automatic bread slicer was invented by Otto Frederick Rohwedder in Davenport, Iowa.  He built a prototype of his bread slicer in 1912.  Unfortunately, his blueprints and machine were destroyed in a fire in 1917.

From there, he struggled to obtain funding to begin again on his machine as the idea of pre-sliced bread was not at all popular among bakers.  Yes, even the invention of pre-sliced bread- which shortly would give us the phrase “The greatest thing since sliced bread”- was a hard sell at first because bakers worried that the bread would go stale before it could be sold.  They also felt the reduction in shelf life of the bread would not be popular among consumers, even if it was reasonably well packaged to try to delay the inevitable accelerated staleness as much as possible.

Finally, in 1927, Rohwedder was able to re-build his machine and produce a model ready to use in an actual bakery.  In order to get around the “staleness” problem, Rohwedder initially tried to hold the pieces of bread together after slicing with pins.  The pins would then be removed when you wanted a slice.  This didn’t really work out for a variety of reasons and he ultimately simply modified his machine to wrap the sliced loaves in wax paper directly after slicing.

Pre-sliced bread helped to further popularize toast and the toaster, because it was easy to grab a few uniformly cut slices, pop them in the toaster, and have breakfast a few minutes later.  And the rest, as they say, is history.