The Pyramids of Giza Were Originally White 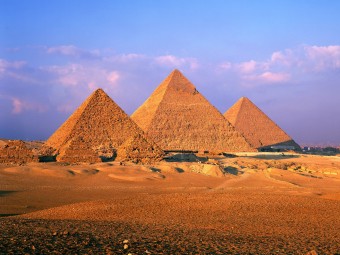 Today I found out the pyramids of Giza were originally white.

When the pyramids were originally finished, they were plated in and outer layer of  white “casing stones”.  These casing stones were cut with astounding precision to give a smooth slope to the pyramids, unlike how they appear today with the outer stones more or less forming very large “steps”.

The original casing stones were made of highly polished Tura limestone, meant to reflect the sun’s rays, and were accurate within 1/100th of an inch.  All total, they were around five feet long, five feet high, and six feet deep and weighed around 15 metric tons each once the face angle was cut, being around 40 metric tons before that for the full block.

So what happened to these casing stones?  Many of them were cut loose and carried off to be used on various other structures, such as when Bahri Sultan An-Nasir Nasir-ad-Din al-Hasan used the polished stones from the Great Pyramid in building mosques in Cairo, some of which are still standing with these stones still intact.

Most of the rest of the stones were worn away, being loosened by earthquakes and eventually creating piles of rubble around the pyramids, which have relatively recently been cleared away.  Although, a few of the stones are still there, such as around the base of the Great Pyramid.

tagged with pyramids of giza facts