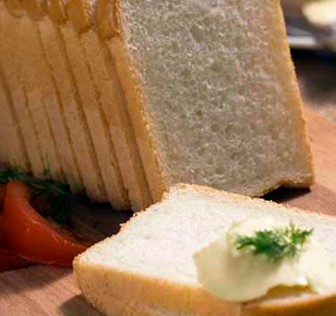 In 1943, Claude R. Wickard, the head of the War Foods Administration as well as the Secretary of Agriculture, got the bright idea to ban pre-sliced bread in America, which he did on January 18, 1943.  The specific reasons behind this aren’t entirely clear, though it was about conservation of resources, particularly generally thought to have been about conserving wax paper, wheat, and steel.

With regards to the wax paper conservation, by FDA regulations, pre-sliced bread used much thicker wax paper than loaves sold whole, due to the fact that sliced bread, not surprisingly, goes stale significantly faster than loaves left unsliced.  While this was the official stated reason for the ban, there was no shortage of wax paper at the time the ban was put in place; according to the War Production Board, most bread making companies had wax paper supplies on hand to last several months, even if they didn’t buy anymore during that span.

It has also been suggested that a secondary goal was to try to conserve wheat and to lower bread and flour prices. Around WWII, the Office of Price Administration had authorized an increase in flour prices by about 10%.  This naturally resulted in the price of bread increasing.  When pre-sliced bread was first introduced nation-wide, it drastically increased bread sales.  So, the thought was that by banning pre-sliced bread, the amount of bread consumed would go down.  This would then reduce the demand for flour and wheat, and, thus, decrease prices of those products while simultaneously increasing stockpiles of wheat.

As with the wax paper reasoning, the idea of conserving wheat seems an odd thing given that, at the time of the ban, the U.S. had stockpiled over 1 billion bushels of wheat. This is enough to meet the United States’ needs for about two years, even if no new wheat was harvested over that span.

Finally, bread making machines themselves used quite a bit of steel in their production; so it has been suggested that one of the reasons for this bread ban was to conserve this metal.  This line of reasoning also seems somewhat dubious as most bread manufacturers weren’t actively buying new bread slicing machines at any given time; so the benefit would be marginal, even accounting for the machine’s large size and significant amount of metal used in its production.

As you might imagine, banning pre-sliced bread didn’t go over very well with the masses. “The best thing since sliced bread” is an expression for a reason.  As one woman aptly put it in a letter appearing in The New York Times:

I should like to let you know how important sliced bread is to the morale and saneness of a household. My husband and four children are all in a rush during and after breakfast. Without ready-sliced bread I must do the slicing for toast—two pieces for each one—that’s ten. For their lunches I must cut by hand at least twenty slices, for two sandwiches apiece. Afterward I make my own toast. Twenty-two slices of bread to be cut in a hurry!

Within about three months of the ban being introduced, on March 8, 1943, it was rescinded.  Upon lifting the ban, Wickard stated, “Our experience with the order, however, leads us to believe that the savings are not as much as we expected…”