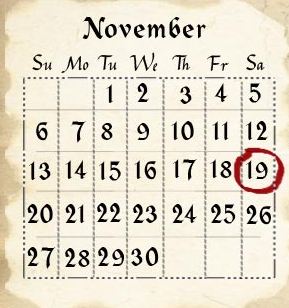 Abraham Lincoln was invited to the dedication ceremony of the Soldiers’ National Cemetery, not as the primary speaker, but simply to follow famed orator and U.S. Senator Edward Everett.  Everett first gave a well received speech that lasted around two hours; Lincoln then got up and gave his now famous address which was around ten sentences.

Interestingly, it’s not clear today whether Lincoln’s speech was well received at the time he gave it; Lincoln himself seemed to think it was an utter failure. When he finished the speech, no one initially clapped or gave any sign that they had liked it.  After a short period, a few people began to clap, but most remained silent.  Reports from people at the speech were very mixed on whether it was well received, but they tended to fall into two camps.  Some thought the complete silence after the speech was out of respect and awe of the President and the speech.  Others report that the silence and even the subsequent small amount of applause were in contempt for the short, lackluster speech the President had chosen to give on such an important occasion.

These mixed reviews continued in the newspapers the following days with reports generally following two lines, depending on what party the reporting body belonged too.  The Chicago Times, for instance, reported that “The cheek of every American must tingle with shame as he reads the silly, flat and dishwatery utterances of the man who has to be pointed out to intelligent foreigners as the President of the United States.”  Not surprisingly, the Chicago Times was a pro-democrat newspaper.   The pro-republican New York Times, on the other hand, praised it as “…deep in feeling, compact in thought and expression, and tasteful and elegant in every word and comma.”

Another interesting tidbit about the Gettysburg Address is that, today, no one is actually sure the precise wording of Lincoln’s speech, due to the fact that there are five primary manuscripts purporting to be the original text of the speech.  These five manuscripts differ from one another slightly and even differ from the exact wording that many newspapers printed after the speech was given.  You might then say, “Well, just use the one that Lincoln himself wrote.”  But, in fact, those five primary manuscripts were all written by Lincoln.  The first two were written by Lincoln and given to his secretaries.  The latter three manuscripts were written by Lincoln and given out to charities.

The version of the speech that you’ll most often read or hear is known as the “Bliss” version (each of the versions is named after the person Lincoln gave the document too, in this case named after Colonel Alexander Bliss).  The Bliss version is unlikely to be the exact wording of the speech, due to the fact that it was written well after Lincoln gave the speech.  However, it is the only version in which Lincoln put a title on, signed, and dated it.  It is also thought to be the last version he wrote and, thus, with Lincoln obviously still tinkering with the wording even after the speech, the version he was happiest with.

Largely because of those reasons, it remains the most popular version, even though in fact either the “Hay” or “Nicolay” version, which are now stored in the Library of Congress, was more probably closer to the real wording.  I say “closer” because transcriptions taken of the speech, which usually are quite accurate, differ from the wording in both the Hay and Nicolay versions.  So, it’s likely that Lincoln changed his wording slightly from what he wrote down while giving the speech. Nevertheless, the most popular version (Bliss), which is also inscribed on the Lincoln Memorial, is worded thusly:

tagged with abraham lincoln speech, November 19, this date in history, this day in history