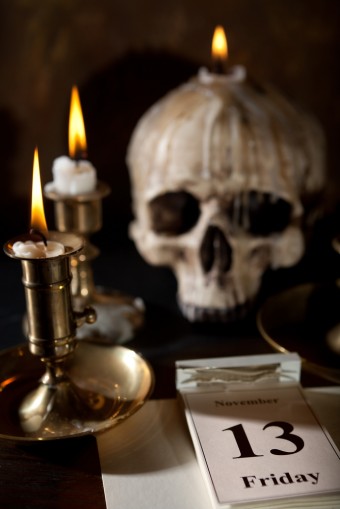 Being wary of Friday the 13th is much more than a quaint superstition observed by a few uneducated people in distant, unreachable towns and hamlets. In the United States alone, it is estimated that between 17 and 21 million people dread that date to the extent that it can be officially classified as a phobia.

So why is Friday the 13th considered such an “evil” day?

The origins aren’t perfectly clear, but we do know that both Friday and, separately, the number 13 have long been considered unlucky and it was around the late 19th century that the first documented instances started popping up of people putting the two together to form the unluckiest day of all.

To start with, the most popular theory as to why Friday is considered unlucky or an evil day is thought to spring from Christianity. By tradition, Friday is considered the day that Eve gave Adam the “apple” and they were kicked out of the Garden of Eden- of course, “Friday” wouldn’t have been around yet. (Note: The notion that it was an apple is a second century invention and contrary to what is stated in Genesis.)

Also by tradition, Adam and Eve were purported to have died on the then nonexistent “Friday”. The Temple of Solomon was said to have been destroyed on Friday. And Jesus was traditionally considered to have been crucified on a Friday, the day we refer to now as Good Friday.  That said, there are several references in somewhat recent history of Good Friday being considered the one exception to Fridays being bad luck.  Such as this reference from 1857:

Notwithstanding the prejudice against sailing on a Friday… most of the pleasure-boats… make their first voyage for the season on Good Friday.

Others theorize that Friday being unlucky predated Christianity.  The name “Friday” was chosen in honor of the Norse goddess Frigg, who was the multitalented goddess of love, beauty, wisdom, war, death, and magic.  Teutonic people are thought to have considered the day extremely unlucky, especially for weddings, due in part to the lovely goddess the day was named for. Later, the Christian church attempted to demonize the goddess, so that may or may not be a contributing factor as well.

Whatever the case, despite these quite old origin theories, well documented instances of the notion that Friday was popularly considered unlucky among the masses don’t seem to have popped up until around the mid-17th century.  Within the next two centuries after that, the idea continued to spread and by the 19th century was nearly ubiquitous in certain cultures.

As for the unluckiness of the number 13, as with Friday, there are numerous possibilities for the origin, the most popular of which also stems from Christianity. It is considered incredibly bad luck to have 13 people sitting at a table for dinner, which supposedly is due to the fact that Judas Iscariot was by tradition the 13th person to be seated to dine at the Last Supper.

However, the Hindus also believed that it was bad luck for 13 people to gather together for any purpose at the same time.

Far away in northern Europe, the Vikings of ancient times told a very similar story.  According to the old Norse myth, 12 gods were feasting at the banquet hall at Valhalla, when Loki, the god of Mischief, showed up uninvited. This, of course, brought the count of gods up to the dreaded number of 13. Loki then encouraged Hod, the blind god of winter and darkness, to murder Balder the Good with a spear of mistletoe, throwing all of Valhalla into mourning, and once again providing another example of a story in history that congregating with 13 for dinner is a bad idea.

So why all these separate religions having such a similar tradition of  demonizing the number 13?  There are those that theorize the number 13 may have been purposely denigrated by the founders of the patriarchal religions to eradicate the influence of the Mother Goddess. In goddess worshipping cultures, the number 13 was often revered, as it represented the number of lunar and menstrual cycles that occur annually. It is believed by those who adhere to this theory that as the 12-month solar calendar came into use over the 13-month lunar calendar, the number 13 itself became suspect.

It should be noted, though, that not all cultures in the ancient world recoiled at the number 13. The Ancient Egyptians believed life was a spiritual journey that unfolded in stages. They believed that 12 of those stages occurred in this life, but last, the 13th, was a joyous transformative ascension to an eternal afterlife. So the number 13 represented death to the Egyptians, but not death as in decay and fear, but as acknowledgement of a glorious eternal life.  Of course, it’s always possible the association with death from Egyptian tradition later morphed into death in an unlucky sense later by cultures influenced by Egypt.

As with the notion of Friday being unlucky, “13” being popularly considered unlucky really seemed to gain steam around the 17th-18th centuries, and by the 19th century in the Western world was likewise extremely widespread in several different cultures.

So when did Friday and the number 13 join forces like a Reese’s Peanut Butter Cup of bad luck to terrorize the masses? You’ll often read that it’s when the Knights Templar were arrested on Friday, October 13, 1307.  However, that origin story is a modern notion with no basis in any documented history.

Others point to the last day of King Harold II’s reign on Friday, October 13, 1066. William of Normandy gave him the opportunity to relinquish his crown, which he refused. The next day William took it by force at the Battle of Hastings, causing Harold’s demise.  Again, it is a modern idea that this is where the first “Friday the 13th is the ultimate unlucky day” notion came about.

It perhaps isn’t surprising, given that both Friday and “13” as unlucky didn’t reach their zenith in popularity until the 19th century, that it wasn’t until around the mid to late 19th century that the two were put together as the ultimate unlucky day.

One of the earliest references of this comes from a club formed by William Fowler.  Fowler set out to prove that these sorts of superstitions are baseless. He thus formed a club known as “The Thirteen Club” in which club members would meet in groups of 13 to dine, with their first ever get together occurring, of course, on the unluckiest day of the week- Friday the 13th in January of 1881.

To thumb their noses even further at the fates, they had club members walk under a ladder before sitting down to a table in room 13 of the building they were in.  They also made sure there was plenty of spilled salt on the table before they dined.

A slightly earlier documented reference comes from 1869, in the biography of Gioachino Rossini where the author, Henry Sutherland Edwards notes:

He [Rossini] was surrounded to the last by admiring friends; and if it be true that, like so many Italians, he regarded Fridays as an unlucky day and thirteen as an unlucky number, it is remarkable that one Friday 13th of November he died.

(Interestingly, traditionally in Italy, Friday the 13th was not considered unlucky, with 13 being often considered a lucky number there until extremely recently when Western European and American influence started to change that. For Italians, classically, 17 was the unlucky number and thus Friday the 17th became the Italian version of Friday the 13th. Nevertheless, Henry Sutherland Edwards was British so, though he was writing about an Italian composer, applied his own superstition to Gioachino Rossini.)

The notion of Friday the 13th being the unluckiest of the unlucky picked up steam from around this point and once we get into the early 20th century, there are numerous documented instances of people referencing it in this way, such as the 1907 novel by stockbroker Thomas W. Lawson called Friday the Thirteenth, which told of a stockbroker’s efforts to destroy the market on that ominous date.

So, aside from the popular “Friday the 13th”  film franchise, what makes the Friday the 13th superstition stick so stubbornly in our collective consciousness? Psychologists point to the fact that if anything negative happens on that specific date, people make a permanent association between the event and the date in their minds, conveniently forgetting all those times Friday the 13th has passed uneventfully.  In short, it is a classic example of confirmation bias.