Why We Call the Seasons Summer, Autumn, Winter, and Spring 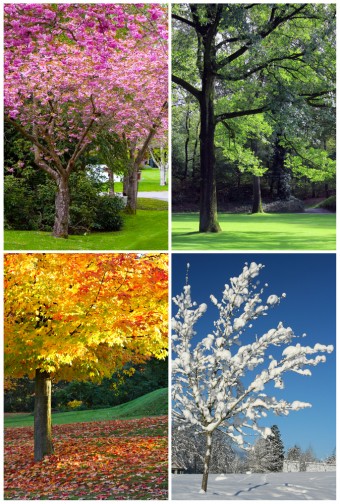 The origin of “fall” as a name for a season, rather than the more common “autumn”, is not perfectly clear, though it’s thought that it probably came from the idea of leaves falling from trees and many plants, particularly the contraction of the English saying “fall of the leaf”.  It first popped up as a name for a season in the later 16th century in England and became particularly popular during the 17th century, at which point it made its way over to North America.

Funny enough, calling autumn “fall” in England has since passed out of widespread practice, but has survived as a common name for the season in North America.   This is not unlike how “soccer” was originally one of the most popular names for the sport in England around its inception and a long time after, which spread to North America, only to have the name die out in England, leading many to believe “soccer” is an “American” name for the sport, rather than one of the original names for it in England. (For more on this see: The Origin of the Word “Soccer”.)

While you didn’t specifically ask it, you might now be wondering what the origin of “autumn” is.  “Autumn” came to English via the Old French “autompne”, meaning autumn.  This in turn came from the Latin “autumnus”, also meaning “autumn”.  From here things get murky, but it’s thought “autumnus” probably came from an Etruscan word and is possibly related to the Latin “augere” meaning “to increase”.  Beyond that, nobody is quite sure why the season was originally called that.

Incidentally, you may also wonder why the seasons are called “seasons”.  The word “season” in this context comes from the Old French “seison”, meaning “sowing / planting”.  This in turn came from the Latin “sationem” meaning “sowing”. Initially this referred to actually sowing seeds, but later, as with the Old French “seison”, shifted definition to refer to the time period when you sow seeds, so literally “seed-time”.  “Season” in this sense in English popped up around the 13th century.  It was also around this time that “season” popped up referring to seasoning food- in this case from the Old French “assaisoner”, meaning “to ripen”.