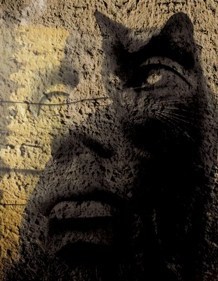 Today I found out the origin of superstitions surrounding black cats including why a black cat crossing your path is considered bad luck.

Black Cats weren’t always the butt of superstitions, feared, or even considered bad luck.  In fact, in early Egyptian times, dating back as far as 3000 BC, cats (including black ones) were the rock stars of the animal world, held in high esteem; to kill one was considered a capital crime. It wasn’t until  the middle-ages in Europe that the black cat’s rock star status started to go downhill as they began to be associated with so-called witches. The hysteria of witches practicing black magic had just hit Europe and alley cats were often cared for and fed by the poor lonely old ladies (funny how some things never change) later accused of witchery.

Their cat companions, some of which were black ones, were deemed guilty of witchery by association. This belief was taken up a notch when a folklore involving a father and son in Lincolnshire in the 1560’s started making the rounds. The pair were said to have been traveling one moonless night when a black cat crossed their path and dove into a crawl space. Naturally, they did what any guys would do, they threw rocks at the furry feline until the helpless injured creature scurried out into a woman’s house, who at the time was suspected of being a witch.  The next day, the father and son came across the same woman and noticed she was limping and bruised and believed that to be more than just a coincidence. From that day on in Lincolnshire, it was thought that witches could turn into black cats at night.

The belief of witches transforming themselves into black cats in order to prowl streets unobserved became a central belief in America during the Salem witch hunts. Even today the association of black cats and witches holds strong during Halloween celebrations, despite the holiday’s religious beginnings.  Thus, an animal once looked on with approbation became a symbol of evil omens in some parts of the World.

However, in some cultures, the black cat is still revered and a symbol of good luck even today. The Scottish believe that a strange black cat’s arrival to the home signifies prosperity, while Pirates of the 19th century believed if a black cat walks towards you, it’s a sign of bad luck, but it’s good luck if it walks away from you. In the English Midlands, a black cat as a wedding present is thought to bring good luck to the bride!