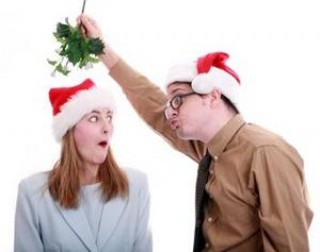 If you’ve ever wondered why we kiss under the mistletoe and how the plant got that strange name, well, wonder no more.

The name for mistletoe derives the fact that mistletoe tends to spring from bird droppings that have fallen on trees, with the seeds having passed through the digestive tract of the birds. Thus, the plant was given the name “misteltan” in Old English from “mistel”, meaning “dung”, and “tan”, the plural of “ta”, meaning “twig”. Hence, “mistletoe” is another way to essentially say “dung twig”.

Not only is mistletoe a dung twig, but most varieties of this plant are partial parasites, being unable to sustain themselves on their own photosynthesis, so they leach what they need from the particular tree they are growing on. Some varieties of mistletoe, such as the North America Arceuthobium pussilum, are full parasites in that they get all their resources from the tree they are growing on and have no leaves.

So where did the tradition of kissing under a parasitic poop twig come from? The mistletoe has been considered a prized plant throughout history going all the way back to the Ancient Greeks, Celts, the Babylonians, and Scandinavians. For instance, the Ancient Greeks considered the plant an aphrodisiac; believed it aided in fertility; and could be used to achieve eternal life.

According to Ancient Babylonian legend, they had the closest thing to our current tradition of kissing under the mistletoe. At that time, single women looking for a mate supposedly would stand outside of the temple of the goddess of love. Mistletoe was hung over the entrance to the temple and when a potential suitor would approach one of the ladies, they were supposed to bond with him. They did not kiss, however, as kissing wasn’t a way to show affection at that time in the Babylonian empire.

As for a more direct root of our kissing tradition, Norseman had many traditions and legends concerning the mistletoe. One tradition was that mistletoe was a plant of peace and so that when enemies met under the mistletoe they were obliged to stop fighting for at least a day. Eventually, this spawned a tradition to hang mistletoe over the doorway of one’s home for peace and good luck.

Mistletoe became associated with Christmas from this tradition of hanging mistletoe in one’s home to bring good luck and peace to those within the house. The mistletoe would be hung around the New Year and the previous year’s mistletoe would be taken down, with its powers apparently tapped. The new plant would then provide this luck throughout the year.

By the 18th century in Britain, this evolved into the kissing tradition we have today. At this time, it became popular to create a ball of mistletoe that would be hung as a Christmas decoration. If a couple was found standing under the mistletoe, they were then obliged to kiss if the mistletoe ball still had berries. For each kiss, one berry would be taken from the ball. Once all the berries were gone, all the “luck” in love and marriage was considered to be drained out of the mistletoe and it was now considered bad luck to kiss beneath it, instead of good luck as before.