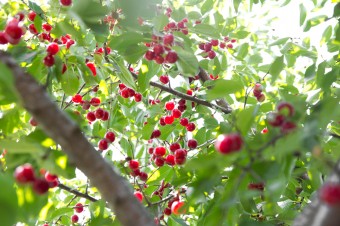 The story goes that a young George Washington was about six years old when he was given a hatchet that he enthusiastically used to chop at just about anything in sight. One morning, he even chopped at a cherry tree, eventually cutting it down. When confronted about it by his father, George hesitated but told his father, “I cannot tell a lie.” He admitted to the crime. Rather than punishing George for chopping down the tree, his father said that his son’s honesty was worth more than a thousand trees. It’s meant to be a story that’s a lesson in integrity, and shows one of Washington’s many supposed virtues. But is there any truth to the tale?

First published by the biographer Parson Weems in 1809, ten years after Washington’s death, the story reportedly came from an old, unnamed neighbor who’d supposedly known Washington as a boy. However, it is the only historical source of the story, and as a legitimate source, it isn’t very credible.

Very little was known about George Washington’s childhood, especially his relationship with his father, who died when Washington was just eleven years old. Given that Weems is known to have copied and adapted several of his “George Washington” stories in that “biography” from English folklore to illustrate various traits George Washington supposedly exhibited in spades when he was an adult, and that Weems provides no firm evidence to back this particular tale, historians today consider the cherry tree story complete fiction.

Beyond the cherry tree story, there have been other myths about George Washington that are occasionally perpetuated. For instance, George Washington never had wooden teeth. It’s true that Washington had notoriously bad teeth, despite having a pretty meticulous dental hygiene routine for his time, including brushing his teeth daily and using mouthwash and a tongue scraper. However, Washington also suffered from constant toothaches and frequently took calomel (mercurous chloride) which can lead to destruction of the teeth. He also used substances that were extremely abrasive to clean his mouth, which probably contributed to the decay of his tooth enamel.

By a combination of that and probably having naturally bad teeth, this led to him losing his teeth steadily from the age of 22. Indeed, by his inauguration in 1789, he had only one natural tooth remaining, which I like to imagine he called “Old Chomper”.

To make up for the missing teeth, his dentist provided him with several sets of false teeth over the years, none of which were made from wood- wood being a very poor choice for this sort of thing. So what did they make them out of?  Mainly things like cow teeth, hippopotamus ivory, and even human teeth that he acquired by various means. The practice of selling teeth for a bit of extra money had been around since at least the Middle Ages—and Washington’s dentist was none other than Jean Pierre Le Moyer, who in 1783 placed an ad in New York papers asking for “persons disposed to sell their front teeth, or any of them.” The next year, Washington is known to have paid 122 shillings to “Negroes” for nine teeth on Le Moyer’s behalf.

Another myth surrounding the memory of Washington is that he once threw a U.S. silver dollar across the Potomac River. Setting aside the fact that these particular silver dollars didn’t actually exist when Washington was young, the Potomac River is over a mile wide—it would be impossible to accomplish such a feat without the aid of some serious, hurricane-like wind. It’s likely that this myth sprung into being as another one of those stories meant to show Washington’s touted virtues- in this case, superhero-like strength.

That being said, his step-grandson recorded a story that Washington once threw a piece of slate roughly the size of a silver dollar across the Rappahannock River, which was only about 250 feet wide near the Washington homestead; this is obviously significantly more doable, though whether true or not isn’t really known.

That being said, in this “virtue”, he shows a fault-  that he wished ardently for the abolition of slavery and hated the institution, yet never chose to do anything about it despite his prominent position and that the people of the fledgling nation loved him.  Yet the only small thing he did do about slavery, he didn’t bother with until his death, freeing his slaves and having his estate help provide for them, getting them started with their new lives as free individuals. (He did make an attempt to free his slaves sooner, in 1794, by selling off and leasing much of his estate, in order to raise funds to make it feasible to emancipate his slaves, but the scheme ultimately fell through. Historians generally think he didn’t take a strong public stance against slavery as he felt that it would split the nation he had so recently fought to create.)

Freeing his slaves didn’t mean that his home—Mount Vernon—didn’t have any slaves at all after his death. At the time of his death, there were a full 316 slaves at his estate, 40 of which were leased from others, and 123 of which were owned by George Washington. Martha Washington owned her own slaves (153 of them) called “dower slaves” which belonged to Martha’s first husband and came with her upon her marriage to Washington. She didn’t share her husband’s view on freeing slaves and, as Washington had no rights to her slaves, he was unable to free them. Martha kept them until her death in 1802 when they were inherited by her children.  Those of George’s slaves that were intermarried with his wife’s slaves were allowed to stay on with the estate as free individuals, if they so chose.