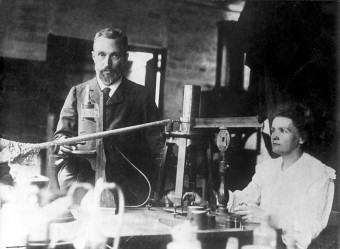 Today I found out that Marie Curie once had two duels fought over her after she had an affair with a married man.

Marie Curie and her husband, Pierre, were no strangers to the press. In 1903, the pair won a Nobel Prize “in recognition of the extraordinary services they have rendered by their joint researches on the radiation phenomena discovered by Professor Henri Becquerel”. Their relationship was a happy one, with each of them being on an even intellectual footing with the other. They celebrated their Nobel Prize and continued their work. But after a few years, tragedy struck.

In 1906, Curie’s beloved husband died in an accident. In the afternoon on April 19, Pierre was crossing the street in heavy rain when he was run over by a horse-drawn carriage that was carrying six tons of military uniforms. Needless to say, he was killed instantly. Though she was heartbroken, she refused the pension that the French government offered her, saying she could support herself and her children just fine. In fact, she went back to work soon after Pierre’s death and even took up her husband’s academic post. Curie wrote,

Crushed by the blow, I did not feel able to face the future. I could not forget, however, what my husband used sometimes to say, that, even deprived of him, I ought to continue my work.

It probably isn’t surprising that Curie eventually moved on in other ways, too. She was only 38 years old when she was made a widow, after all. Soon, she set her sights on Paul Langevin, her husband’s former student. A brilliant man just as committed to science as Pierre was, he would be able to fill the void left by her deceased husband. Plus, he was a good-looking and had a “thriving moustache.” What wasn’t to like? There was only one problem: he was already married.

Nevertheless, Curie and Langevin wrapped themselves up in a steamy affair. Langevin was no stranger to extramarital relations; his marriage wasn’t a happy one, with his wife reportedly once hitting him over the head with a bottle. (Although given his many affairs, perhaps he deserved it. ;-))

She’d been well aware of his previous forays with other women, but something about Curie enraged her. So, when Madame Langevin found out that her husband and his mistress had set up an apartment where they could meet in private, she had someone break in. The thief took intimate letters from the house, and Madame Langevin threatened to expose the affair to the press if it didn’t stop.

The affair either continued or Madame Langevin went back on her word. Three days before Marie Curie won a second Nobel Prize, Madame Langevin leaked the letters to the press, declaring that she wanted money and the custody of the Langevin children.

The newspapers went wild for the story. They painted Curie as a seductress who had lured a family man away from his good French wife and children. It was an easy thing, given the prejudices of the day—Curie was a foreigner, being a native of Poland, and (they inaccurately reported) a Jew.

The papers started rumours that the affair had started when Pierre was still alive. These allegations were also untrue, but it sullied Curie’s name enough that the Nobel Committee asked her to stay in France rather than travel to Sweden to accept her award. They shuddered to think what would come of an adulteress rubbing shoulders with the King of Sweden himself!

Albert Einstein, on the other hand, jumped to Curie’s defense, saying she ought to come to Sweden regardless of the allegations.

I am convinced that you [should] continue to hold this riffraff in contempt…if the rabble continues to be occupied with you, simply stop reading that drivel. Leave it to the vipers it was fabricated for.

Meanwhile, there was not just one, but two duels fought over the incident. One was fought between two editors of rival papers: M. Chervet of the Gil Blas and Leon Daudet of L’action Francaise. Their argument was about the merits of Madame Langevin’s charges. The duel was fought with swords, and after “several fierce bouts,” Daudet was injured and the two reconciled.

The other duel was fought between Paul Langevin and Gustave Tery, a journalist who had called him a “boor and a coward.” Langevin didn’t take kindly to the insult and demanded a duel be fought with pistols. Elaborate preparations took place, but the duel resulted in nothing—Tery refused to shoot on the grounds that he did not want to rid France of one of its greatest minds, and Langevin declared that he wasn’t an assassin and put his gun down, too.

The publicity effectively ended the affair. Langevin and his wife were able to settle their differences outside of court and later reconciled, though Langevin went on to father an illegitimate child with his secretary.

Curie travelled to Sweden against the advice of the committee and accepted her second Nobel Prize. Afterwards, she sat down to an eleven-course meal with the King of Sweden which went smoothly. She was the first person—man or woman—to win a Nobel Prize twice. Unfortunately, she paid for her work with her life. In 1934, she succumbed to leukemia, the result of prolonged exposure to ionizing radiation.  Her work notes, even today, are still too radioactive to handle without proper protection.