September 4, 2013 Terynn Boulton
Candace asks: What makes a fruit a fruit and a vegetable a vegetable? 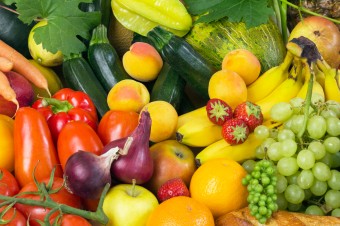 An apple is a fruit, right? So is a banana. How about a cucumber? A vegetable, right? Not really, from a botanical standpoint.

For instance, would you believe that beans, corn, bell peppers, peas, eggplant, pumpkins, cucumbers, squash and tomatoes are all fruits? That’s because, botanically speaking, fruits are the part of flowering plants that contain the seeds and are the means by which such plants disseminate those seeds.

So even nuts are fruits. Grains, which are really just oversized seeds, are also fruits.

So what about vegetables?  Botanically speaking, vegetables are all the other parts of the plant, including the leaves (e.g. lettuce and spinach), roots (e.g. carrots and radishes), stems (e.g. ginger and celery) and even the flower buds (e.g. broccoli and cauliflower).

To sum it up – if it is from a plant and has seeds (or would have seeds if it wasn’t genetically engineered or cultivated to not have them, as with things like seedless grapes), it is a fruit; if it doesn’t, it is a vegetable.

So why in the world do we learn that such things as peppers, corn and cucumbers are vegetables? Why when we shop in the produce section of the grocery store are these foods found in the veggie section? We can blame it on the culinary traditions where the part of the plant we are eating does not generally matter in terms of its classification – taste does! When it comes to cooking, fruits are generally sweet tasting and vegetables are more savory and less sweet. Fruits are also typically served as part of dessert or as snacks, and vegetables are often part of the main dish.

So, in the end, the scientific classification system makes a clear dividing line between fruits and vegetables as described above, while the culinary system of classification is considerably more ambiguous, hence why so many are confused as to what is a vegetable and what is a fruit. But, at least now you needn’t be confused any longer. 🙂