The Death of George Washington 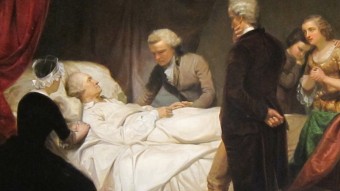 After the Revolutionary War, George Washington looked forward to a quiet retirement as a gentleman farmer in Virginia. But this was not to be as he was repeatedly called back to serve the needs of the new nation he helped create.

When he was called to serve as the United States’ first president in 1789, Washington said on April 16 of that year, “My love of retirement is so great, that no earthly consideration, short of a conviction of duty, could have prevailed upon me to depart from my resolution ‘never more to take any share in transactions of a public nature.”

When his term was up, he was unanimously re-elected, keeping him away from his home, Mount Vernon, for another four years. As war was looming on the horizon in 1798, Washington accepted command of American forces once again, although this time around his position was more ceremonial and advisory, rather than hands-on, due to his advanced age.

President Washington and his wife Martha finally managed to make it to Virginia, where most of their time was consumed with making the long-neglected Mount Vernon solvent once more. The General took an active role in the running of his plantation, overseeing the work of the slaves (about 318 at this time working at Mount Vernon) and other workers, and inspecting his property. And he was doing just that on December 12, 1799 in a cold, miserable mixture of snow, sleet and rain on horseback for several hours.

The following day, Washington didn’t feel very well, stating he had a sore throat. But he still rode out during a heavy snowfall to mark trees for cutting on his property. He was hoarse upon his return but made light of it to his wife and secretary. When offered medicine he shrugged if off saying, “You know I never take anything for a cold. Let it go as it came.” (His wife had recently recovered from a cold, so presumably he just thought he’d caught the same.)

By the early morning hours of December 14, 1799, Washington was seriously ill. His breathing was significantly impaired, so much so that he could barely speak, but he would not allow his wife to seek help for fear the night air would result in a return of her own sickness.

When their maid came to their room at sunrise, she was sent to fetch Mr. Albin Rawlins, the estate overseer, who prepared a mixture of butter, molasses and vinegar and helped the General drink it. The result was the opposite of what they’d hoped. Instead of soothing his throat, attempting to swallow the thick mixture nearly resulted in him suffocating and sent him into convulsions.

Next came that mainstay of medicine of the time – bloodletting, of which General Washington was a big fan. Mrs. Washington – not so much, so as her husband was encouraging Rawlins to go for the gusto, the Missus was telling him to dial it back. Rawlins must have been very relieved when doctors actually began showing up.

Dr. James Craik, Washington’s personal physician and friend, arrived and, seeing his friend with an inflamed, swollen throat, bled him once more. At the time, it was thought that by removing blood from the body, it could potentially take down swelling and reduce inflammation.

Dr. Craik also administered another oral medicine comprised of vinegar and sage tea, and applied a poultice to Washington’s neck (and later elsewhere on his body) containing ground, dried beetles. These beetles contained a substance known as cantharidin, which, when it comes in contact with human skin, causes blisters to rapidly form, again trying to balance out the fluids in Washington’s body to reduce the inflammation and swelling that was making it difficult for him to breathe.

None of this worked.

Another physician, Dr. Elisha Dick, arrived at 3 p.m. and, seeing that Washington could still barely breathe, it was decided that they should risk bleeding the General once more…

The last doctor to come, Dr. Gustavus Brown, showed up shortly after, and all three agreed to treat the patient rectally with calomel and tartar. (At least they didn’t blow smoke up his backside, as was another common treatment when people were suffering from breathing issues, such as drowning victims.)

After a fourth and final bleeding and after administering a substance to make Washington vomit, with no positive affect, not surprisingly, Washington had had enough. Having 32 ounces of blood removed over the course of the day, induced blisters on various places on his body, and lack of ability to take in air, his life was slipping away anyway.

He told the three physicians, “I feel myself going. I thank you for your attentions but I pray you take no more troubles about me. Let me go off quietly. I cannot last long.”

He had his wife bring him the two wills he had made, which he read over and had one destroyed. Among other things, he noted in his will that all his slaves should be freed upon his wife’s death and those who were too elderly or sick to work should continue to be supported by the estate. Further, those who were unable to acquire an education on their own should be provided with tutors to teach them reading, writing, and some useful trade with which they could then support themselves after being freed.

A slave owner since the age of 11, Washington’s views on slavery had changed radically over the course of his lifetime, near the end of his life noting in stark contrast to earlier attitudes he had held,

The unfortunate condition of the persons, whose labour in part I employed, has been the only unavoidable subject of regret. To make the Adults among them as easy & as comfortable in their circumstances as their actual state of ignorance & improvidence would admit; & to lay a foundation to prepare the rising generation for a destiny different from that in which they were born; afforded some satisfaction to my mind, & could not I hoped be displeasing to the justice of the Creator.

He also instructed Tobias Lear to “arrange and record all my late military letters and papers. Arrange my accounts and settle my books, as you know more about them than any one else, and let Mr. Rawlins finish recording my other letters which he has begun.”

That done, he gave instructions on how he wanted his body handled after his death. Washington was a taphephobic (irrationally terrified of being buried alive). To avoid this, his specific instructions for his body included “do not let my body be put into the vault in less than three days after I am dead.  Do you understand?”

While today, the fear of being buried alive is quite irrational in most parts of the world- besides the more obvious ways we’re better at telling, the widespread practice of embalming guarantees the person is dead before burial- in Washington’s time, it wasn’t necessarily crazy to be afraid of this happening.

For instance, in 1896, T.M. Montgomery, who was supervising the disinterment of remains at the Fort Randall Cemetery, reported that a little over 2% of those bodies exhumed were definitely victims of being accidentally buried alive. In other words, about 2% woke up, tried to claw their way out, and were unable to do so.  Given the oxygen supply in a coffin doesn’t last that long, it is likely the actual percentage of people buried alive was higher, when you include the ones who didn’t wake, but were still technically alive when buried.

The reason the rate of being buried alive was quite high around this time was primarily due to the high number of people dying of various diseases like cholera, smallpox, etc.  These people tended to not get a close investigation to make sure they were really dead, rather than just unconscious, and they also tended to be buried quickly to prevent the spread of whatever disease they were thought to have died from.

In any event, Washington died at approximately 10 p.m. on Saturday, December 14, 1799 at the age of 67. When told that her husband was finally past his pain, she said, “Is he gone? ‘Tis well. All is now over. I shall soon follow him. I have no more trials to pass through.”

So, beyond the doctors’ well-intentioned-but-more-harmful-than-good “care,” what is thought to have killed George Washington? It’s believed today that President Washington died of an inflamed epiglottis (the flap near the base of the tongue that keeps food from getting into your windpipe).  In extreme cases, swelling of the epiglottis can block the airway sufficiently to cause the person to suffocate.  As to what caused the inflammation, this condition is most often the result of a Haemophilus influenzae type B or strep infection.

Whatever the underlying cause, the net result was inability to get sufficient oxygen to support the body. The massive blood loss he sustained in such a short time may have also sent him into hypovolemic shock, resulting in his heart being unable to pump sufficient blood throughout the body. Combined with the lack of oxygen, this very probably would have resulted in some of his organs ceasing to function.

Interestingly, when it became apparent that no safe amount of bloodletting was going to reduce the swelling enough to allow Washington to breathe normally, the second doctor, Elisha Dick, suggested doing a radical new procedure called a tracheotomy to open the airway to allow Washington to breathe (something that likely would have helped tremendously and may have even saved his life in combination with ceasing to bleed him anymore), but the technique was so new (and the patient so illustrious no doubt) that the other doctors argued against it and stuck to tried and true medical treatments like bloodletting, inducing blisters via beetles, and shoving stuff up people’s bums.