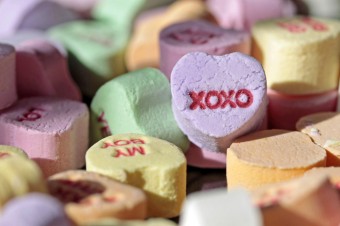 You’ve seen XO as a sign-off representing love, affection, or friendship on letters, cards, emails, chat rooms and text messages. You may have even been torn on whether or not to include both the X and the O, considering one signifies hugs and the other means kisses. Use the incorrect symbol, and one could get the wrong idea! 😉

We can’t be 100% sure why or how XOXO ultimately came to mean “hugs and kisses”, but we do at least have a reasonably good theory to work with on the “X” part.

Signing letters with an ‘X’ dates back to the Middle Ages.  At this time, many couldn’t read or write, so this was an easy way for someone to sign something and, particularly in legal documents, assert that whatever was said in the document was true.  Specifically, the X represented a Christian cross/Christ at this time, so by signing X, you’re essentially saying “In Christ’s name, it’s true / I assert.”

“X” first started being used as a substitute for “Christ” by religious scholars about a millennia ago, which is actually how we ultimately got Xmas as an alternative name for Christmas. The X here is not actually the English X, but rather the Greek letter “Chi”, short for the Greek for Christ,

In any event, the X was thus used on documents in this way. It is thought that perhaps the X made the jump to “kiss” as people sometimes would kiss the X (Christ), in the same way some would kiss the Bible- in this context more or less “sealing it with a kiss”.

An alternate, somewhat less likely theory that’s popped up very recently is that the X simply looks like someone puckering up for a kiss, or two people kissing… two people with triangular faces apparently.

Whatever the case, according to the Oxford English Dictionary, the first usage of X’s to mean “kisses” came in a letter by a priest, Gilbert White in 1763:

Madame, … In the whole it is best that I have been the loser [of a friendly bet], as it would not be safe in all appearances to receive even so much as a pin from your Hands.

I am with many a xxxxxxx and many a Pater noster (Our Father) and Ave Maria (Hail Mary), Gil. White.

However, while we can’t say for sure, it seems just as likely that he actually meant “blessings” not “kisses”, as pointed out by Stephen Goranson of Duke University.  He noted the lack of any other instance of “X” meaning kisses for around another century after this letter.  Further, in Daniel Defoe’s 1719 work Robinson Crusoe, we have this, among other, reference using crosses (in this case physical crossing) as “blessings”:

There was a letter of my partner’s, congratulating me very affectionately upon my being alive, giving me an account how the estate was improved, and what it produced a year; with the particulars of the number of squares, or acres that it contained, how planted, how many slaves there were upon it: and making two-and-twenty crosses for blessings, told me he had said so many AVE MARIAS to thank the Blessed Virgin that I was alive…

Whatever the case, around the mid-19th century we start to have numerous references to “X’s” meaning “kisses”, such as in Aunt Judy’s Magazine (Issue XI p. 669 which is thought to have been published between 1866-1885), where one person notes: “All these crosses mean kisses, Jemima told me.”

From this, at least we know the “X’s” meaning “kisses” preceded “O’s” as “hugs” as there are no such references up to this time of the latter, so that’s something I guess.

If you weren’t satisfied with the lack of definitiveness of the “X” part of things, you’ll be even less so with the “O” symbolizing the hug. The most popular theory here pre-supposes the reasonably likely X / Christ signing theory is correct. The theory then goes that the “O” is of North American descent, with illiterate Jewish immigrants who couldn’t sign their own John Hancock arriving to the U.S. and refusing to sign with the X (Christ/Cross) and instead using a circle on documents for a signature.  (Incidentally, many etymologists believe this is how the derogatory racial slur for Jewish people “kike” came about, “kikel” being the Yiddish word for circle- Jews being associated with circles as that’s how illiterate Jews would sign, rather than with the “Christian” X.)

Many people believe the “O” made the jump to meaning “hug” because, by looking down on the O from above and squinting just right, it sort of resembles two people embracing, but this is just pure speculation. It’s also been speculated that the “O” was perhaps not chosen for the Jewish reason, but rather was in connection with tic-tac-toe, which popped up shortly after the first confirmed references to “X’s” meaning “kisses”. Thus, once it became common to have a single letter to mark “kisses”, there was a need for a similar letter for another form of physical affection, hugging, and the game of tic-tac-toe perhaps provided the inspiration… Or perhaps it was the other way around… or maybe it really was the Jewish signing method that provided the XOXO inspiration.  And perhaps, in either case, the “O” sort of looking like hugging contributing to the choice, or perhaps not!  We just don’t know!  This is fun!

Now I know what you’re thinking, if the “X” means “kisses” and the “O” means “hugs”, why do we say “hugs and kisses” when someone writes XOXO and not “kisses and hugs”?  That one’s also largely still up for debate as well. (I know, you’re shocked.) Is it simply because one does not want to presumptuously go for a kiss when you haven’t even hugged yet? Is it?!?! 😉

One alternate theory that has gained a little traction over the years, is that the above theories on the “X” and “O’s” are all wrong and it is the X that means hugs, mimicking two people embracing, and the O that appears to be a mouth puckered for a kiss, hence why it’s “hugs and kisses”.  Given that we know from documented references that X’s first meant kisses before XOXO came about or “O’s” meant “hugs”, we can safely ignore this latter theory.

One thing we do know for certain, this post now holds the new record for being the least definitive article ever published by TodayIFoundOut.com.  But, at the least, I hope it was an interesting read. It certainly was interesting to research. 😉