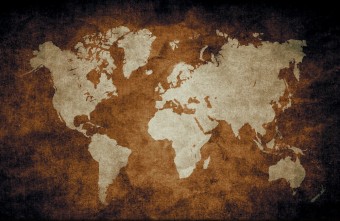 Today I found out the most likely origin of each of the continents’ names. (Using the seven continent model)

First on this list is Africa. There are many different theories as to the origin of Africa’s name. After the Romans defeated Carthage (which is in modern-day Tunisia in Northern Africa) in the third Punic War, they called their new province “Africa.” The most popular theory as to the origin of the name is that it was named for a native tribe there—the Afri, with “Africa” then being the feminine form of “Africus”, literally meaning “land of the Afri”.

An alternate theory, which has a hole in it due to when the name was first used, is that it comes from the Phoenician word “afar” which means “dust.” Put together with the Latin suffix –ica, sometimes used to denote “land”, the name could mean “a land of dust.” Given Africa’s hot, desert-like climate in the north, which is where the Romans claimed their province, the Phoenician root is considered by many to be a plausible alternative to the “Afri tribe” theory, for the origin of Africa’s name.

Whatever the case, as Europeans continued exploring and discovered the breadth of the continent, the name that the Romans had originally used for their small province stuck, and the entire continent became known as Africa.

Antarctica comes from the Greek word “antarktike,” which literally means “opposite to the north.” The continent is, of course, home to the southernmost point on Earth. John George Bartholomew, a Scottish cartographer, is believed to be the first person to use “Antartica” to refer to the continent. However, the name was used for a different place by the French before this. In the 1500s, they held a colony in Brazil below the equator which they named France Antartique.

Asia derives from the Ancient Greek “Ἀσία”, which was used as early as 440 B.C. by Herodotus in his Histories. However, it is likely that the name was in use long before then, though not referring to a whole continent, but rather originally just the name for the land on the east bank of the Aegean Sea, and then later the Anatolia (part of modern Turkey).

Romans referred to two provinces when talking about Asia: Asia Minor and Asia Major. A common theory is that the Greek name ultimately derived from the Phoenician word asu, which means “east”, and the Akkadian word asu which means “to go out, to rise.” In reference to the sun, Asia would then mean “the land of the sunrise.”

Terra Australis Incognita means “the unknown land in the south” in Latin, and rumours of the continent’s existence dated back to Ancient Roman times. Of course, Romans did not have the maritime technology to reach Australia and did not have any direct evidence that it existed, as far as we know. When Europeans finally discovered the continent, the name “Terra Australis” stuck. The continent was referred to the shortened “Australia” by a number of early explorers, but it was Matthew Flinders who pushed for its use from 1804. Though “Australia” was used unofficially for several years, Governor Lachlan Macquarie petitioned for its official adoption in 1817. It wasn’t until 1824 that the name was officially given to the continent.

Europe was likely named after Europa, one of Zeus’ many lovers in Greek mythology. Legend has it that he abducted her after taking on the form of a white bull and took her to Crete.  It is difficult to determine the etymology of the name, but one theory is that it comes from the Akkadian word erebu which means “to go down, set” or the Phoenician ereb which means “evening, west.” The western directional meaning would mean it had similar origins to Asia. Alternatively, the name Eurpoa may have derived from the Greek “eurys”, meaning “wide”, and “ops”, meaning “face”, so “wide face”.

As in many of the other names of the continents, “Europe” originally didn’t refer to anything close to what we think of as Europe today.  Rather, it was just a small region, like “Asia”, referring to a portion of present day Turkey, part of Thrace.

Like most, I’ve known that the Americas (North and South) were named after Amerigo Vespucci since my early education. However, the story behind why this is the case is somewhat more interesting and quite a bit less well known. Vespucci was a navigator that traveled to “the new world” in 1499 and 1502. Being a well educated man, he realized that this new world was not part of Asia, as some had initially thought. Vespucci chose to write about his travels and his books were published in 1502 and 1504. Being both entertaining and educational, his accounts of the new world were reprinted in almost every European language.

In 1507, a German cartographer, Martin Waldseemüller, chose to make a new map that included the new world. He and two scholarly partners were aware of Vespucci’s writings and were ignorant of Columbus’s expeditions. As such, they decided to name the new land after Vespucci, stating:

When the large new map, approximately 8 feet by 4 feet, was unveiled by Waldseemüller, it had the large title “AMERICA” across what is now present day Brazil. Waldseemüller used Vespucci’s travelogues as a reference for his drawing and so his map had South America as the only part of this new western hemisphere. When North America was later added, the mapmakers of the time retained the original name. In 1538, the famous geographer Gerard Mercator chose to name the entire north and south parts of America as one large “America” for the entire western hemisphere